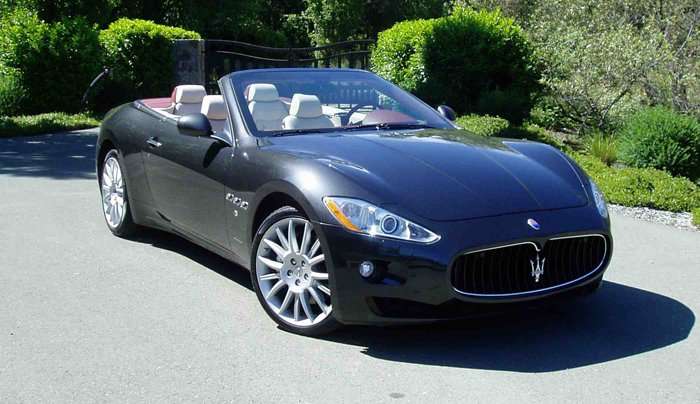 All of Maserati’s Trident-badged models are graceful works of art, with alluring, curvaceous and smoothly flowing lines, and all are powered by a 4.7-liter, DOHC, 32-valve V8 with electronic fuel injection that generates 433 horsepower @ 7,000 rpm and delivers 361 pound feet of torque. The engine is mounted up front, low, behind the front axle in a longitudinal orientation, and transfers motive force to the rear wheels via an electronic “drive-by-wire” throttle and a ZF 6-speed automatic with four modes: Auto Normal, Auto Sport, Auto ICE, and manual shift capability with steering column-mounted paddle shifters.

Now, in addition to its Quattroporte models and the GT Coupes, there is a new offering in the GT lineup – it’s the convertible 2010 GranCabrio that features a three-layer soft top which weighs a mere 143 pounds, including all of the hydraulics. The top operates up or down at speeds up to 20 mph in only 24 seconds at the touch of a rocker switch (add 2 seconds for window operation). When in the raised position, the top’s shape is maintained by 5 steel and aluminum struts that also allow for its smooth design contours. When stowed, the soft-top fits in a smaller space than would a retractable hardtop, and the lines remain true to the design profile displayed by the GT Coupe.

Recently, Maserati has made great strides in creating a more mainstream awareness in the world of high-end luxury sports cars. The legendary Italian automaker continues to employ the equally legendary Pininfarina Italian design house in styling the beautiful vehicles that they manufacture. The Quattroporte (which translates as four doors) displays an unquestionably elegant persona, but for my taste, the GranTurismo  Coupe exudes a much more emotional presence and overall appeal. And now, the GranCabrio takes its place in my desire to own, with its open-air adaptability. Both the GT Coupe and GranCabrio share the same mechanicals and carefully conceived choice of materials and equipment, ensuring high-quality and pride of ownership. 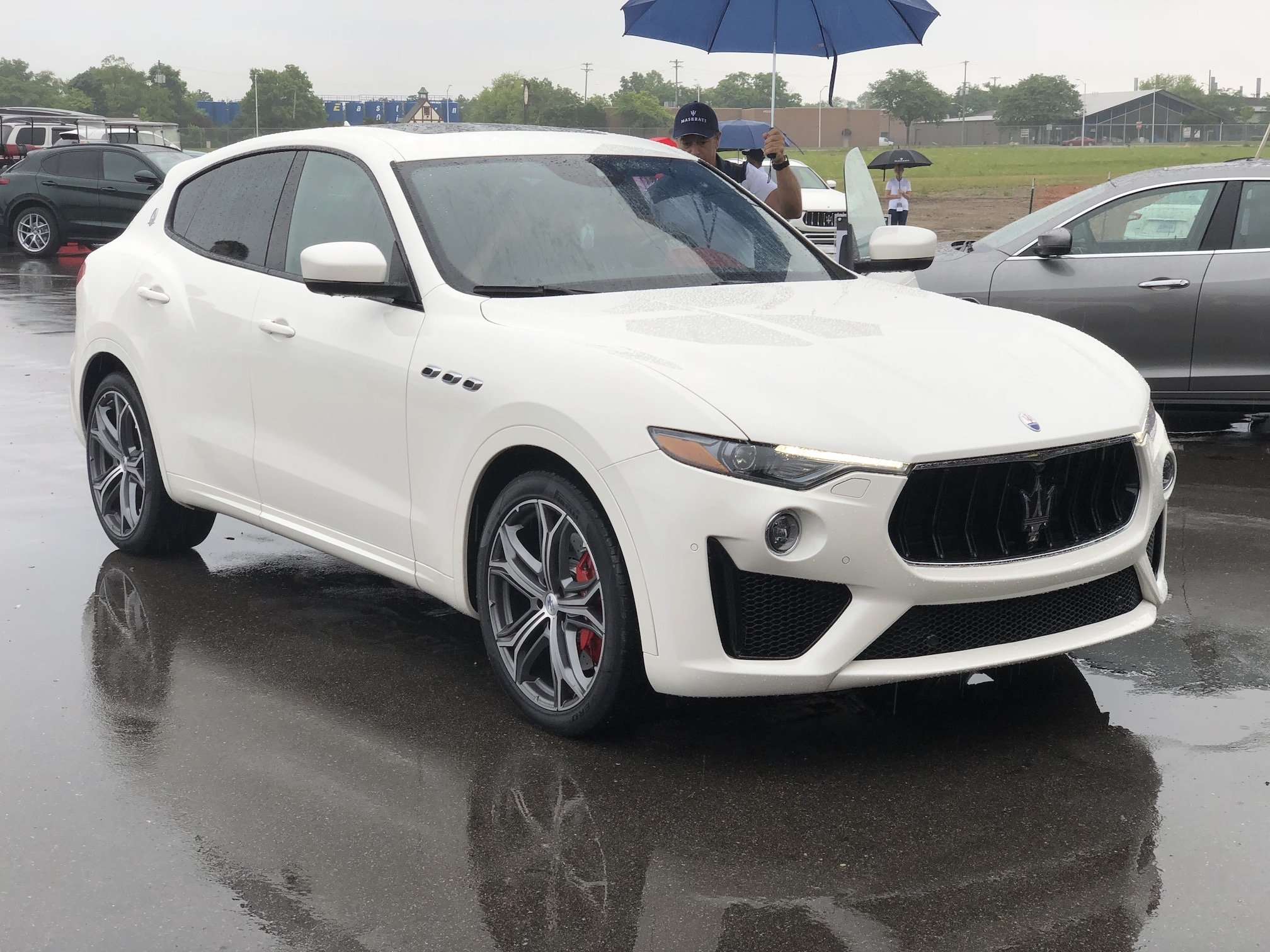 Maserati celebrates its 95th Anniversary this year. The car was developed by the Maserati brothers who began in Bologna, Italy as racing car manufacturers in 1905 (considerably earlier than Ferrari), with the chassis of the A6 racecar. Prodded by valued customers, the first Maserati road car was produced in 1947 at the Geneva Motorshow – it was the A6 GranTurismo, styled by Pininfarina, and was acclaimed for both its technical content and for its solutions in avant-garde design. The first standard GranTurismo, the 3500 GT was presented ten years later in 1957, again at the Geneva Motorshow which proved to be the turning point for Maserati, placing the emphasis on building road cars ahead of the exclusive practice of producing racing models. Over the next 7-year period, 1,983 units of the 3500GT were ultimately produced.

Continuing in the Maserati tradition, and celebrating the 60-year anniversary of the A6 along with the 50th anniversary of the 3500GT, the Italian automaker debuted its new Maserati GranTurismo coupe. The name selection by the way, was not incidental, as yet again, Maserati and Pininfarina joined forces in creating a car capable of stirring one’s emotions while virtually outperforming competitive marques in terms of engineering design and uniquely fetching style.

The 2010 Maserati GranCabrio is truly worthy of proudly displaying the iconic, stylized Trident logo that was inspired by the famous statue of Neptune standing in the center of the brother’s home city of Bologna.

The impressive features of the Maserati Gran Turismo may be traced immediately back to the legacy of the Trident (Maserati A6GCS) and to the timeless future illustrated by the Birdcage 75th concept car. The exterior exhibits a natural, muscular form, which begins forward with the impressive grille, and the fenders suspended gracefully over the large wheels and tires, ultimately generating a powerful yet elegant style that fits tightly over the car’s mechanical componentry.

The design leads off with the oval grille and its inverted peak or “V” that points to the large recognizable chrome trident logo that seems to float in the center of the grille, made up of vertically concaved strakes, flanked by the jewel like wraparound headlamps.

The profile is emphasized by the reduced overhangs and long hood furrowed by the classic “V” character streak; three traditional air intakes of pure Maserati heritage; the pronounced wheel well arches; and short rear deck with integrated fascia, sporting twin dual exhaust outlets. Other distinguishing features appearing in chrome include: the profile of the ports on the front fenders and door handles, and the shoulder surround that continues around the base of the top at the rear.

In the rear, the triangular lights incorporate 96 LED lights that ensure night-time recognition; and a wind tunnel designed, ample aerodynamic cone framed at the sides by the chrome exhaust tailpipes, which sit over the lower bumper section. The hood is aluminum, while the trunk is made from Sheet molded compound.

My GranCabrio’s exterior finish was done in a beautiful Grigio metallic (a dark gray), while the interior was executed in Avorio (Bone) and Maroon leather with Moonwood polished wood trim accents. The top was Burgundy. The car’s base price was set at $135,800 while options and extras raised the final tally to $142,500, which  was inclusive of Gas Guzzler Tax, Dealer Prep, Transportation and Sales Tax. The option list consisted of: Titanium painted brake calipers, contrasting interior stitching and 20-inch Birdcage design alloy wheels – 8.5-inches wide up front and 10.5-inches wide in the rear. The wheel design incorporates three trident images with separator spokes.

SUMMARY:  The 2010 Maserati GranCabrio is a delightfully elegant machine, to behold, with the top up or down, but moreover, it is a potent machine as well. It is, without question, a performance sports convertible, but with a full complement of luxurious elements. Some may even rank it in the supercar category. Ignite the healthy V8, and the sound of both the engine and exhaust offer up a most pleasing and distinctive resonance, without being intrusive – especially when the Sport button is pushed. The automatic transmission is fitted with auto-adaptive control which adapts to driving style and conditions: the driver may choose from four different operating modes: Auto Normal, Auto Sport (selected using the Sport button), Low Grip/Auto Ice (selected through the Ice button) and Manual (selected by moving the selector lever from “D” to the special track). In addition to changing the gearshift logic, pushing the Sport button also activates the sport mode for the Maserati Stability Program and the electronic control suspension setting – called Skyhook, and provided as standard fare here in the U.S. The Manual mode will prove to be the most enjoyable for spirited driving, allowing gear selection through either the gearshift lever or a flick of the steering column mounted paddle shifters. To ensure safety and to maintain mechanical stability and reliability when in the Manual mode, the gearbox automatically changes to the next gear when maximum revs are reached, and also shifts to avoid logging down.

The Brembo brakes rein in the GranCabrio’s hurtling forward motion promptly and effectively, with all the usual braking assist features, and a “Hill Holder” device, holds the car braked on an incline for just over 1 second, so that the driver has time to move his or her foot from the brake pedal to the throttle without the car moving. The Park brake is electronic.

Seats are highly supportive and comfortable whether cruising or hauling the mail, and the leather-covered, three-spoke steering wheel is ergonomically pleasing, with just the right grip. Key words describing the overall interior ambience are: modernity, elegance, craftsmanship, sportiness, livability and fresh air. Convenience and security are provided by such features as Adaptive light control, Parking sensors, immobilizer and anti-theft system.

In the final analysis – if the Maserati GranCabrio doesn’t include it or doesn’t have it available, you probably don’t need or want it. It is truly an exceptional open air (or not) tourer.