2010 Tesla Roadster Sport: To the Batcave!

During a recent visit to New York, I was called by the sales manager for Tesla Motor’s new retail operation in Manhattan, Michael Sexton, who invited me to drive the all-electric Tesla Roadster.  Now, I had previously driven the concept Model S on a special indoor course at the National Building Museum in Washington, D.C.  Yes, I said indoor course, as all Tesla vehicles roll under electric only power, and thus, are emissions free.  The Model S, designed by Franz von Holzhausen, the former Mazda design whiz kid, made me feel like an executive, as it was decked out in luxury, with tons of bells and whistles. Since the course was of limited length, I was not able to fully experience the car, but was impressed with the off the line power.

My experience driving the Roadster was 180 degrees different, as this car is all about wall to wall performance, along with a surprising amount of comfort thrown in for good measure.  When I drove the Roadster, I felt like Bruce Wayne, Batman’s alter ego.  You see, the Tesla showroom is located in the arts district in Chelsea, full of lofts and galleries dedicated to painting, photography and the like.  Their showroom is very hip, with Tesla cars on display, and the Tesla Web site visible on cool wide-screen Apple monitors.  The floors are concrete, rock-like, just like the Bat Cave.

So I wrench all six feet nine inches of my body into the car, riding shotgun as the six foot four Sexton made entry into the driver’s seat look pretty easy.  We donned our secret identity masks (the latest designer sunglasses!) and shot out of the “Bat Cave” courtesy of 215 kW (288 horsepower) of pure electric thrust. 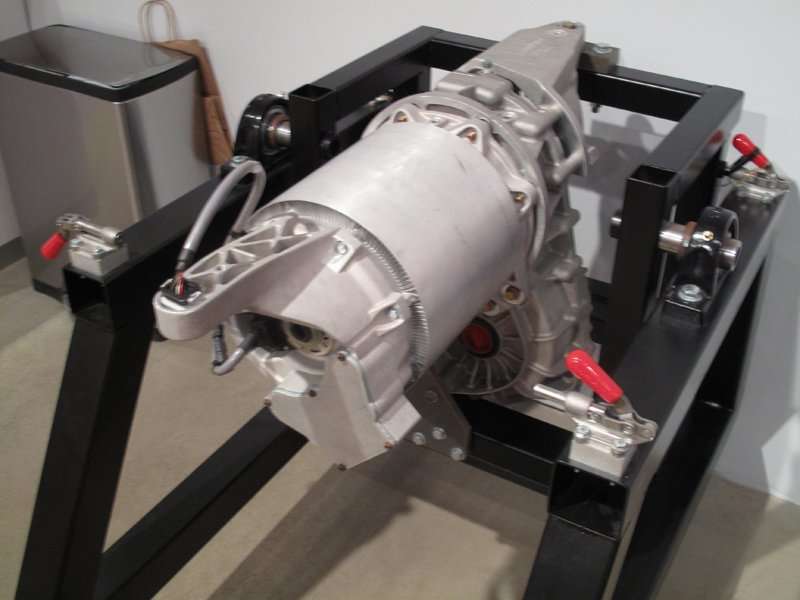 “Holy Torque,” I exclaimed, having become sidekick Robin as Sexton temporarily assumed the role of Batman.  I’ve driven Porsches, Ferraris, AMG Benzes and the like, but never have I felt this type of thrust experience in such a small car.  This car’s acceleration in nothing short of amazing.

As the Sun started to set, I became Batman, and my Tesla “Batmobile” headed towards Times Square.  Even the Tesla logo, which somewhat resembles the Batman logo that would shine above Gotham City signaling Wayne to the Bat Cave, was displayed in the night sky over Times Square, competing with projected images from P.Diddy and Donald Trump.  Of course the previous sentence and this whole scenario is fiction, but one would have thought there was a Tesla logo beaming as passersby parted the waters to let our gorgeous blue supercar go by with stares of admiration.  And just for the record, one of New York City’s many nicknames is Gotham!

Okay, back to the real world, where perhaps the most amazing thing about the Tesla Roadster is the simplicity of its operation.  The motor is just that, a motor.  It’s not particularly large or impressive looking like a big V12 with four cams hanging on top of the engine block. In fact, you can’t see it at all as it resides amidships under a cover.  There are no dual exhaust tips at the rear, because they’re not needed.  The chassis is made of bonded aluminum, and is very rigid.  The motor connects to the simple single speed gearbox, which then turns two high torque capacity halfshafts to drive the rear wheels.  Styling is based on the Lotus Elise.  Interior accoutrements are purposeful, like heated bucket seats, great for the top off jaunts on a cool April night in Manhattan.  A JVC aftermarket headunit provides a dedicated iPod connection, as well as hard drive based navigation and music storage.   The only interior bow to serious high technology is the Vehicle Display System (VDS).  The touch screen VDS allows you to view charge/battery status, adjust the performance parameters and access various system tools.  It’s also the spot where Tesla technicians can input firmware updates to the computer control system that allow them to pinpoint any faults with your car, and also update performance software to keep your Roadster operating at its peak.

The Roadster features a rudimentary top that requires a bit of patience to first learn to remove and install correctly.  The cloth top slides across the targa like opening on suspended rods, and I’m sure this will be an area where you will see continuing upgrades to improve this operation.  A slick, lightweight, one piece hardtop is optional and really changes the overall look and stance of the car in a positive way.  But there is no where onboard to store the top, which is a drawback versus the canvas top, which you can roll up and store in the Roadster’s tiny trunk.

The Tesla Roadster delivers full availability of performance every moment you are in the car, even while at a stoplight. Its peak torque begins at 0 rpm and stays powerful at 14,000 rpm.

This is the precise opposite of what you experience with a gasoline engine, which has very little torque at a low rpm and only reaches peak torque in a narrow rpm range. This forces you to make frequent gear changes to maintain optimal torque. With the Tesla Roadster, you get great acceleration and the highest energy efficiency at the same time. All while requiring no special driving skills to enjoy it.  There is no clutch pedal, because as I mentioned earlier the Roadster has a single speed gearbox.  Want to go fast?  Floor the go pedal!  Want to reverse?  Press the “R” button, and the current is reversed, making the car go backward (limited to 15 mph!).  Want to brake?  Take your foot of the throttle, and engine braking is immediate and slows the car rapidly (and generates power to recharge the battery cells).  Of course, traditional performance brakes by Brembo will also accomplish this duty in very rapid fashion.

The motor redline is insane, a motorcycle like 14,000 rpm.  The 288 horsepower motor also features 276 pound-feet of torque.  The “base” Roadster accelerates to 60 mph in a scant 3.9 seconds, while my test car, the Roadster Sport, does the trick in just 3.7 seconds.  Look up the numbers folks, these acceleration figures are in the supercar category.  Top speed as you might imagine is limited, with 125 mph on tap.  You can take a good guess on how quickly you would deplete the batteries if the top speed was much higher. Both models feature a four hour charge (with an optional 240 volt hookup) and a range of about 236 miles.

The Tesla Roadster battery pack in comprised of 6831 lithium-ion cells.  The so-called Energy Storage System (ESS) has a 53 kilowatt per hour output, and weighs in at 992 pounds (450 kgs).  As you probably know by experience with battery powered consumer electronics (a camcorder is a good example), batteries do not have an infinite lifespan.  The charge, usage and recharge cycles eventually render the battery useless.  Tesla offsets the inevitable through purposeful engineering.  Tesla limits the maximum charge for each of the 6831 cells, thereby extending the life of each.  A sophisticated battery cooling system is standard, and cycles on and off even when the car is not being used to keep the ESS at its optimal operating temperature. Tesla expects full battery capacity for five years or 100,000 miles, and up to seventy percent of battery capacity after that time/mileage frame.  Tesla offers a battery replacement package – more on that later.

Driving along a parkway that abuts the Hudson River, I was very impressed with the ride quality of the car.  Once you get to the speed you want (very quickly!), the Roadster is a paragon of relative comfort.  The chassis is made of bonded and extruded aluminum, and is very rigid, with no flex or cowl shake evident.  The Roadster body is made of lightweight, strong Carbon Fiber, and features replaceable panels and bumper covers.

My Roadster tester came in at a base price of $109,000; with options that pushed the base price all the way up t0 $154,196.  The “Sport” option alone costs $19,500 and includes the high-torque motor, adjustable suspension, and special wheels and tires.  You can go bananas with various option packages that add the hardtop, more leather and carbon fiber, and multiple color and body accessory options.  Destination and delivery charges add another $1950 to the price, bringing the total tester amount to $156,145.  Buyers can earn a $7500 tax credit for this “green” purchase.

Finally, you can purchase extended service and battery replacement plans.  For $5,000, you can extend warranty coverage (three years/36,000 miles) for an additional 3/36.  The battery replacement warranty costs $12,000 and provides a new ESS seven years from the agreement date.  If you need the ESS earlier, you will pay a $2,000 premium for each year you exercise the agreement early.  You’ll earn a $1,000 discount for each year you defer to exercise the agreement after seven years.

Is any electric car worth $156,000?  You will be the judge of that.  I do urge you to stop laughing and visit your local Tesla dealer to arrange a test launch, err, make that drive.  Now if you come out of the dealership wearing a flying mammal suit, you too will be sold on the supercar that is the Tesla Roadster.