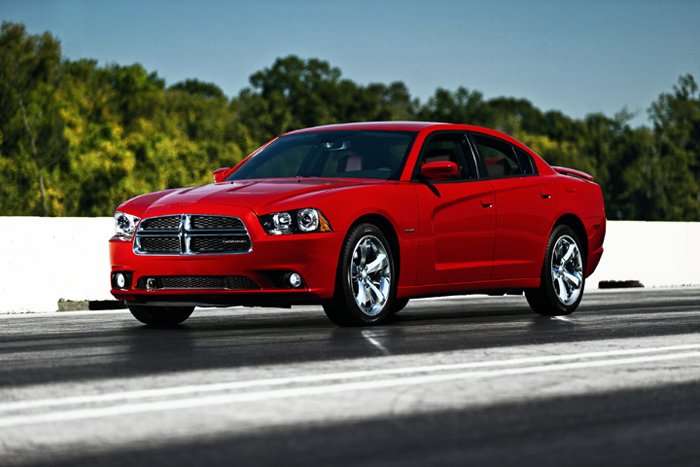 The oldest Dodge nameplate is the 44-year-old Charger, which dates back to 1966 when it first went into production. In need of some product portfolio help, the Charger lives on and comes at a pivotal moment in the brand’s history. Outside of the Ram pick-up and the Challenger muscle car, Dodge didn’t have much in the staple that awe-inspiring until now. Ralph Gilles, President, and CEO-Dodge Car Brand, Chrysler Group LLC explained at a recent press conference in San Francisco that the company abused the Dodge brand. How things change in so little time. “We’ve spent the last year redefining and building the Dodge brand. Now we’re going to show customers what the future of Dodge will like,” stated Gilles.

With three models to choose from — S, R/T and R/T AWD — the backbone of the seventh generation Charger begins with its retro styling, a throwback to the 1968-1970 second generation Charger. The 4-door, fastback styled model inherits the original’s “coke bottle” signature line and hood and side scallops. With sales skyrocketing the Charger played a key role in “Bullitt” with Steve McQueen and the “Dukes of Hazzard.” This aggressive design inheritance is something Dodge should have considered for the prior sixth generation Charger. Along with its 4-piece split grille, stylish rims, fixed dual polished-metal exhaust tips and 164 LED taillamp design the Charger is now much more aggressive.

The all-new Pentastar 3.6-liter V6 engine that replaces both previous V6s sees drastic improvement in power. Dodge gave the Pentastar 292-horsepower and 262 lb.-ft of torque; 114-horsepower better than the prior model. The 5.7-liter HEMI V8 gets 370 horsepower and features Fuel Saver Technology which deactivates 4-cylinders when additional output is not required. An aging 5-speed ‘Auto Stick’ automatic transmission is tied to the new engines. I only drove the V6 model since the R/T HEMI wasn’t available. Power was adequate for its size and weight (SE 3,961 lbs) and handling was on par with Charger competitors. However, I would like to see at least 440 horsepower in the HEMI to match McQueen’s Magnum V8 power.

Inspired by the third generation 1971 model, the Charger’s cabin no longer feels like the current Charger. This is due to leather, heated front and rear seats, heated and chilled cup-holder ring, heated steering wheel and an aluminum bezel that surrounds the center stack, instrument cluster and gear shifter. As well a new Uconnect Touch infotainment system with an 8.4-inch touchscreen dominates the atmosphere. A base 4.3-inch screen is found in every model. The 8.4-inch is very friendly with large, easy-to-find touch commands. It’s not as intuitive as Ford’s “MyFordTouch,” but it’s much easier to navigate through. Dodge has partnered with Garmin for their mapping capabilities. I’m not sure if that’s a good thing or a bad thing, as I have never found an external navigation device such as a Garmin useful when Google maps dominates in every geographical category.

The Charger is also blessed with a multitude of safety technology such as the standard side-curtain air bags, front-row reactive head restraints, driver’s knee bag and front seat-mounted side-thorax air bags. For $25,140 (base) Dodge has made sure the 2011 Charger is now a worthy contender in the four-door sports-sedan category.