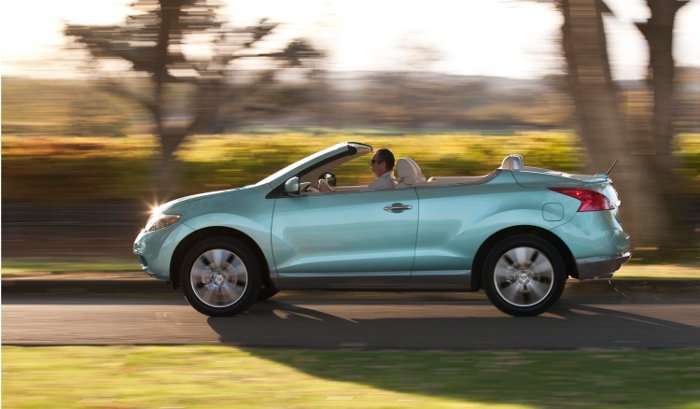 Nissan introduces its convertible crossover to us in Palm Beach, Fla. Yep, that’s a sports-ute convertible. They took the Murano and made it into a soft-top drop-top and dubbed it the Murano CrossCabriolet. To our surprise, the vehicle fit nicely within the environment. While driving around this horrendously wealthy community it was nice to have a car that nobody else could own until later this Spring. Especially considering in a morning’s ride I probably passed more than a few Bentleys and Rolls-Royces!

As we drove slowly along the manicured streets chockablock with mansions and beyond chic boutiques, the CrossCabriolet turned a surprising number of heads and took well to Palm Beach. Kissed by the mild Florida spring sun and caressed by a warm sea breeze, it was definitely a moment. That “moment” is what this rather unusual car is all about. As the first crossover convertible, it has two doors, although they’re plenty big and a trunk. In reducing the entryways by half, Nissan made them 7.9” longer. This process also removed the B-pillar from the middle of the roofline, making it a true convertible.

When the top is down there is nothing from the windscreen to the trunk. That trunk, which was shaped out of the rear compartment of the crossover, still offers 7.6 cu. ft., good for a couple of suitcases. When the top’s up, space jumps to 12.3 cu. ft. The top is cloth, with aluminum reinforcements within the structure. It is electrically raised and lowered and takes about 30 seconds to do the deed.

So does the design work? Actually it does. I was doubtful before seeing it in the midst of other cars and trucks. With the top raised, the roofline is lower, but reflects a similar line to the hardtop Murano. The most noticeable feature to me with the top down is the strength of the rear shoulders. With no hatchback, the trunkline is completely different, and draws your eye. The roof, when stored, is underneath a metal tonneau; from the side the lines are sleek, and the heaviness you’d expect being born of a sports-ute just isn’t there. Add the fact that all CrossCabriolets are all-wheel drive, so they’re higher off the ground, and it’s amazing they aren’t completely ungainly. But it works, especially in the lighter colors of the six offered.

The vehicle is based on the 2009 Murano, and the convertible was planned when that car was being designed and engineered. Having said that, the hardtop and the convertible are only the same forward from the windshield. Its mechanicals come straight from the Murano hardtop. The powertrain is the same 3.5-liter 24-valve DOHC V6 which generates 265 horsepower and 248 lbs.-ft. of torque. Power goes through a continuously variable automatic transmission to very nice 20” split five-spoke titanium finish aluminum-alloy wheels with Toyo all-season tires. Additionally, the CrossCabriolet has an independent suspension featuring MacPherson struts in front, a multi-link rear design, cradle-type front subframe and front and rear stabilizer bars. Dual flow-path shock absorbers add some extra smoothing out to the ride.

When you cut the top off a car, you make it less rigid, so Nissan’s engineers had to put some strength back into its backbone. There are dual floor-panel structural crossmembers and strengthened under-floor sill cross members to do the same thing. There’s also a joint bar between the side member and the side sills, again to stiffen things up. Nissan added some stressing to help with the situation. In all, the car weighs 400 pounds more than the hardtop. The rear headrests will pop up and turn into mini roll bars in an accident. The seats are a different shape and slide fore and aft easily to help with access to the rear. Since the CrossCabriolet has only premium leather, the seats look good and improve rear seat visibility. With the top up, there seems to be plenty of headroom in the rear, although with the front seats all the way back there’s not so much legroom.

Its interior is attractive, appearing less like a sports ute’s cabin than in the hardtop. There are more luxury touches. There are three interior colors available, depending on which exterior color you choose. When you’ve done that, you are out of choices for your CrossCabriolet. Everything else comes standard. That includes navigation, which has a 9.3 gig hard drive and XM NavTraffic available with a subscription. You get Bluetooth, HomeLink connectivity for safety and a backup camera. The stereo is a Bose system with eight speakers, including a subwoofer. The volume is automatically adjusted when the top goes up or down. Naturally you can hook up your iPod and control it through the car. One omission for a car approaching entry-level luxury prices is blind-spot warning. It’s on several Infiniti models, and would “fit” this car nicely. While this isn’t a feature that’s noticeably missing, it’s one of those nice touches.

Driving the CrossCabriolet was enjoyable. As with all drop-tops, this one is noisier than the hardtop, but that’s to be expected: five dB louder inside at idle and four dB at highway speeds. With the top up on the interstate, it is quieter than you expect, but there is a “convertible” noise from the wind blowing across the fabric. It is a small price to pay to be able to remove the top for “fun” times. With the top down you can carry on a conversation in the front seats, although there’s a little more wind than wished for total comfort. But people who buy and drive convertibles are, at least to some degree, looking for that.

Other than the topless experience, there’s little difference in how this Murano drives compared to any other Murano. All of the CrossCabriolets will be all-wheel drive models with everything on them. With a price of $46,300, the only options are the two lighter interiors since it’s better leather, but only adds $500 to the price.

So who’s going to buy a convertible sports-ute? Nissan thinks it will be similar to existing Murano owners, but a little younger with a little more money. They won’t have little kids at home. They probably want the size and carrying capability of the ute but will be intrigued with the topless capability. Nissan figures they’ll have a household annual income of $125,000 and will be bought basically by couples, but skewing towards more females. The expected EPA mileage ratings are 17 mpg city and 22 mpg highway.

They aren’t saying how many they expect to sell a year, but I would expect it won’t be a huge number and that’s okay with them. Success for a product like this is much more than just how many you sell and how much money you make. But I’m guessing in a couple months you will see a couple CrossCabriolets cruising amongst the Bentleys in Palm Beach.