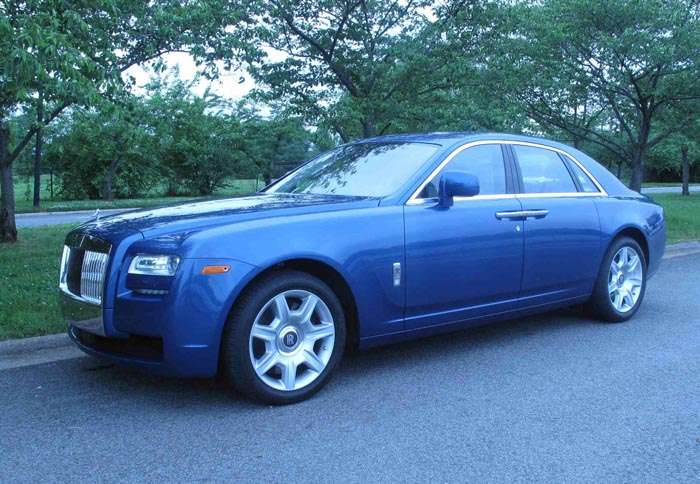 During a recent test drive of the all-new 2011 Rolls-Royce Ghost, I constantly felt like another “Spirit” was with me.  Could it have been from the Silver Spirit model produced from 1980-1998?, or could it have been the “Shadow” of the original Roll-Royce Silver Ghost, now pegged as the world’s most valuable automobile.  Umm, Ghost, Shadow, and Spirit – all former Rolls-Royce model names that evoke a presence, and the new Ghost certainly has that.

I approached my drive of the Ghost with an open mind, as I had recently returned from Scotland where I previewed the latest from now rival Bentley, the Mulsanne.  Would the Ghost be better than the Mulsanne?  Which company would now wear the crown that denotes the best that traditional British luxury has to offer?  The short answer is that the Ghost is a much different motorcar than the Mulsanne, even though they are in the same general price club.  The longer answer is that they are both terrific.

Where the Mulsanne excels at providing large scale luxury (It’s a very big car at 6,800 pounds) the Ghost excels at being the kind of motorcar that is equally at home at the opera and on the backroads of your favorite Sunday drive route.

The Ghost can truly be called a vehicle with dual citizenship.  Whereas the Mulsanne (Bentley is owned by German brand Volkswagen) was fully developed and built in Crewe, United Kingdom, the Ghost feels very much like a British BMW (and that is not a bad thing at all).   Many of the influences of parent company BMW could be seen and felt during the driving experience.

Let’s start under the hood, where the traditional British 6.75-liter V12 motor has been ditched for a 6.6-liter unit derived from the 6.0-liter V12 found in the BMW 760.  The 48-valve engine features variable valve timing and direct injection, and outputs a massive 563 horsepower and an equally impressive 575 pound-feet of torque. The engine is mated to a super smooth eight speed automatic transmission. The engine compartment is nicely finished, and a giveaway to the BMW lineage are the resin valve covers.  BMW has long used composites under the hood to save weight.  The engine also features dual turbochargers, and moves the Ghost forward with alacrity.  Zero to sixty miles per hour comes up in a Ferrari like 4.7 seconds.  Less than five seconds in a nearly 5,500 pound car?  Ghostly indeed!

A strong BMW influence can also be felt underneath, where a double wishbone front suspension and multilink rear combine to make Ghost a super handler.  The Ghost also features Anti-Roll Stabilization and electronic Variable Damping Control (VDC), which analyzes multiple parameters every few milliseconds to ensure optimal damping control for Ghost no matter the road conditions.  The VDC air suspension system works very well, borne out by a corner I approached at speeds that one would normally take with a smaller, lighter vehicle like a BMW 5 Series.  No problem, as VDC tightened up and reined in the nearly three-ton weight with no drama.  I never took my foot off the throttle, and the Ghost never complained.  Kudos to Goodyear as well for developing run flat, low rolling resistance tires for the car that can deal with its weight, handle without fuss, yet return very little tire noise to the well isolated cabin.  My test Ghost was equipped with optional 20 inch wheels, and all Ghosts feature a self-righting “RR” logo on the wheel centercaps.

Okay, so we know that the Ghost accelerates like actual ghosts were chasing it, and handles like a 5 Series.  But what about traditional British Luxury?  All there and then some!  The Ghost continues the Goodwood (the city where the Rolls-Royce factory is located) tradition of finely appointed cabins.

My test vehicle was finished in Metropolitan Blue, with Seashell leather and Wenge veneers (optional).  For some reason, I expected a letdown of sorts in the Ghost interior when compared to the ruling king of luxury the Phantom.  After all, open your checkbook on a Phantom, and you can outfit the interior with all sorts of wood, leather, and premium metal finishes.  A full tilt Phantom Drophead (convertible) can set you back a cool half million.  So at $245,000 base, and $295,875 as tested, how could the Ghost possibly compare?

Very well, with its own unique Rolls DNA.  The Ghost does not try to compare with big brother Phantom, or even with rival Mulsanne or Continental Flying Spur.  It carves out its own space by providing a full palette of luxury all within a very reasonable cost for a motorcar that still features the hand built craftsmanship that made Rolls-Royce famous.

Entering and exiting the Ghost is made easier by front and rear doors that open from the “B” pillar.  The rear doors open a wide 83 degrees, and can be closed at the touch of rear quarter window mounted button.  The doors elicited many positive comments from passersby at a local park where I shot the accompanying photos to this review.

The driver’s position is commanding, with great outward views front, side and rear.  You do not want huge blind spots in a $300,000 car!  The steering wheel houses controls for audio and standard Dynamic Cruise Control.  The gauge cluster contains a “Power Reserve” gauge to the left of the speedometer, which seems like a fancy vacuum gauge to me.  Plant your foot, and the needle shows how much juice you have left in the horsepower tank.  I’d rather see a voltmeter and oil pressure gauge sharing a single round pod like the fuel/temperature gauge combo—useful gauges to help monitor the health of your expensive twin turbo engine and accompanying electrical system.  The gauges are gorgeous though, with white faces, black lettering, chrome accents and black needles. Just below is an information panel that serves as a driver information center.  I found it useful when using the navigation system.  The nav system can be viewed on the center console screen, and you can also get turn-by-turn directions via the optional Head Up Display (HUD) unit.  I found the HUD a bit distracting during daylight driving, so I hit a convenient dash button, and my turn-by-turn directions were displayed in the driver information center.  To the left of the gauge cluster are direct access buttons for the HUD and for optional Lane Departure Warning and other features.  To the right is the electronic parking brake and a very useful “Hold” button.  The Hold button allows you to keep your Ghost firmly in place, at a traffic light for example, while you attend to a matter that may require you to take your foot momentarily off the brake pedal.  Hit the gas pedal when you are back in the saddle, and the Hold control automatically releases.

Moving to the center stack, the Ghost features a version of the BMW iDrive system, yet it seems far more intuitive.  I especially like the built it driver’s manual, so you can immediately access via the car’s harddrive all you need to know about Ghost operation and systems.  Very nice!  A total of seven cameras can be outfitted to your Ghost, with five viewed on the center screen: Rear park camera with two side cameras, effectively giving you an all around view when reversing; and two front “wing” mounted cameras for checking pullouts where you may have limited visibility. There’s also one camera forward for the Lane Departure Warning system, as well as an infrared camera for the optional Night Vision system.  The center screen can be hidden behind a beautiful veneer panel should you want a less intrusive driving experience.

Below the center screen and two Bull’s Eye air vents with “Organ Stop” controls lies an array of eight programmable buttons.  At first glance, these handsome, crystal-like buttons look like the presets for your radio stations.  In fact, while they can serve in that capacity, they can be programmed as direct access buttons for your favorite features.  For example, button one was programmed by the Rolls-Royce PR team to help me find my way back to the hotel that served as the base of operations during my test drive.  Button two was programmed to provide direct access to control whether I wanted my “Spirit of Ecstasy” hood ornament to rise or lower automatically or manually to prevent theft or car wash damage.  I programmed button three to take me directly to the onboard digital owner’s manual.  I absolutely love this feature, and you can always revert to accessing menus and features via the rotary controller on the center armrest.  FYI – rear passengers also have a rotary controller to guide them through two rear mounted screens if you opt for the Rear Theater Configuration.  Veneered Picnic Tables are another must have option for the comfort of your rear passengers, and the whole interior was made brighter with the addition of the optional Panorama Sunroof.  Finally, a 16 speaker Lexicon audio system provided the mandatory concert hall listening experience.  The system features 16 speakers (with subwoofers) 10 channels and 600 watts of power.  Of course, iPod integration, satellite radio and Bluetooth are standard equipment.

Though I did not get the chance to drive the Ghost at night, Rolls-Royce has built in static sensors that respond to your hand motions. For example, reach into the door pockets at night, and sensors softly illuminate LED lighting so you can see what you are reaching for.  I can only imagine how nice the preset keys and white faced gauges look at night as well.

Just to the right of the center console is a nicely done analog Ghost clock, though it’s a bit hard to read from the driver’s seat.

The Rolls-Royce Ghost is a very complete driving machine.  I never thought I would ever use the term “driving machine” to describe time spent in a Roller, but times have changed and Rolls-Royce has adapted.  I don’t see this car as a cheap Phantom.  I see it as a driver’s Phantom at a much more desirable pricepoint.