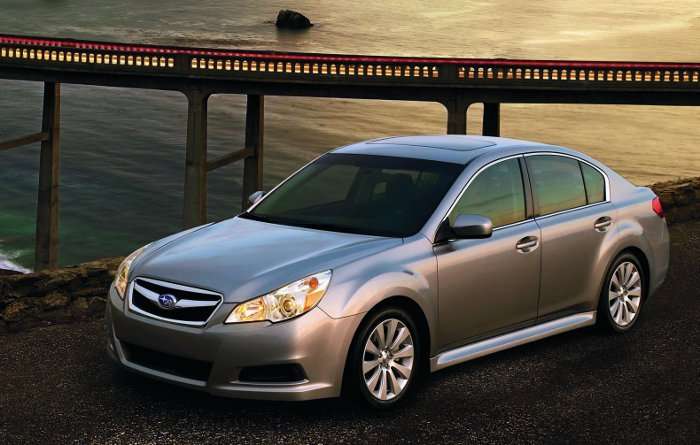 The Subaru Legacy has been with us since 1989 and still ranks as the company’s flagship model. It entered a new era with its 5th generation lineup for the 2010 model year. The global midsized sedan was enhanced last year in virtually every dimension, while only gaining an additional 50 pounds.

Three basic versions of the Legacy will continue to grace the Subaru stable for 2011 – all designated by engine size: Legacy 2.5i; 2.5GT; and 3.6R – all are available in two trim levels: Premium and Limited, except for the 2.5 GT, which is no longer available in Premium trim, and all are equipped with Subaru’s symmetrical all-wheel drive. The 2.5i draws its motive energy from a 175 horsepower 2.5-liter SOHC, horizontally opposed (Boxer) four-cylinder engine that develops a like amount of torque in pound feet. The 2.5GT gets its driving force from a 2.5-liter DOHC 4-cylinder boxer engine that is turbocharged and intercooled (the turbo unit is mounted beneath the engine), generating 265 horses and 258 pound feet of torque. The naturally aspirated 3.6R replaced the 3.0R, delivering 256 horsepower and 247 pound feet of torque in the form of a DOHC, 6-cylinder horizontally-opposed boxer engine.

The 2.5i with its 6-speed manual gearbox channels power through a Continuous All-wheel Drive system with a viscous-coupling locking center differential – when equipped with the CVT transmission, there is Active All-wheel drive with an electronically managed continuously variable hydraulic transfer clutch. The 2.5GT comes with a 6-speed manual transmission and the Continuous All-Wheel drive system, while the 3.6R engine mates to a 5-speed electronically controlled automatic transmission and Subaru’s Variable Torque Distribution system that utilizes a planetary gear-type center differential in combination with an electronically controlled, continuously variable hydraulic transfer clutch.

The Legacy’s predecessor was noted for its sportiness and reliability, and the 2010 model lineup held the course with a new platform, on a longer wheelbase that yielded nearly four inches of additional rear seat legroom

The 2010 Legacy became the roomiest ever with an increased level of comfort, quiet and refinement, and a bold new design that stands apart from other mainstream midsize sedans, with pricing comparable to front-wheel drive midsize competitors that was lower than 2009 model Legacys. Both the 2.5i Premium and Limited models are available with a PZEV emissions rating.

The new 2011 Legacy, rivals many midsize segment leaders in roominess, yet stands apart with a bold and high-tech look that comes across as somewhat masculine. The Subaru badge is the focal point of the new grille, which features a squared off lower edge. Character lines travel in an arc from the grille, forming power bulges on the hood and then tapering off into the A-pillar. A coupe-like silhouette consists of a larger greenhouse, and the powerful wheel arches and shorter deck provide a sporty look. Folding mirrors become standard on all models for 2011, and the 2.5 GT Limited, which is the sole turbocharged model now includes a standard power moonroof and fog lights which were previously optional. Option packages have been consolidated on Premium models (2.5i and 3.6R), and the harman/kardon Audio Package, which is standard for Limited and optional on Premium models, now includes factory-installed XM Satellite Radio® with a three-month trial subscription.

Inside, the 2010 Legacy stepped up in refinement with a sporty four-dial instrument panel augmented in all Legacy models by a multi-information display with a trip computer located in the center of the dashboard. Appointments were richer in appearance, with a sporty 3-spoke steering wheel (leather-wrapped in all but the base 2.5i and 3.6R), and an electronic parking brake – with an electronic Hill Holder System – that eliminates the traditional parking brake handle.

All 2011 Legacy models are equipped with Vehicle Dynamics Control as standard fare, which combines stability and traction control capability. Also standard is the 4-wheel disc Anti-lock Brake System with Electronic Brake-force Distribution and, new for 2010, the Brake Assist safety system.

My test 2011 Subaru Legacy was a 3.6R in Limited trim with the five-speed electronically controlled automatic with steering-wheel mounted paddle shifters. The exterior was sprayed in the new Caramel Bronze Pearl metallic finish that replaced Harvest Gold, while the interior was executed in a two-tone Bone and Charcoal theme with leather seating and Satin Silver toned accents. The base price was set at $28,295 while the price as tested with no options, after adding for Destination and Delivery, came to $30,015.

SUMMARY: The 2011 Subaru Legacy 3.6R Limited with its 5-speed automatic transmission featuring paddle shifters leans to the sporty sedan side of the market in all shifting scenarios.

The AWD adds stability and aids in tight cornering. Steering input delivered nimble response in a positive manner, and the ride quality is appropriately firm without undue harshness. The dash-mounted electronic Park brake eliminates clutter in the cockpit, and engages by pushing on the switch and releases by pulling the same switch.

My test car was pretty plush as it came but one can always upgrade with popular available options.

In the final analysis, the 2011 Legacy stable provides more than enough variety in model choices to satisfy a very wide range of consumer wants and needs, at reasonable prices.