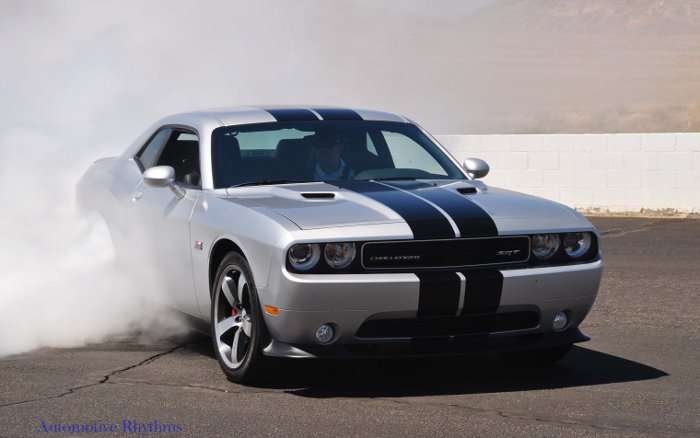 Times are changing in an enthusiastic and obvious direction for the Chrysler Group’s SRT division — aka Street and Racing Technology — to the point where the once smaller spin-off of the company’s performance unit has now evolved into its own brand. Lead by Ralph Gilles, the revolutionary designer, innovator and think-tank leader, SRT welcomes three top draft picks to join the team’s captain, the 2012 Dodge Challenger SRT8. According to coach Gilles the new squad will receive a modernized playbook instilled with five new pillars for success: Awe-inspiring powertrains; outstanding ride, handling and capability; benchmark braking; aggressive and functional exteriors; and race-inspired, high-performance interiors. After one-on-one drills with each player in Southern California, I can honestly predict that the SRT team is going to the playoffs this year.

SRT was manifested in 2002 as Performance Vehicle Operations (PVO) to showcase Chrysler’s competence and ability to craft quality and fervent performance vehicles that matched or overachieved the benchmarks of competitive, in-house customization divisions. Think of Mercedes-Benz’s AMG vehicles or Cadillac’s V-Series cars and you can imagine what an all-new 6.4-liter HEMI V8 engine can do under the hood of either the 2012 Chrysler 300 SRT8, 2012 Jeep Grand Cherokee SRT8 or my personal preference, the 2012 Dodge Charger SRT8. There’s something spectacular about its massive yet defining “tunnel holed” grille that welcomes any adrenaline seeker’s anticipation of exciting times behind the wheel.

To interpret the power, uniquely bold exteriors and invigorating interiors of the four horsemen, SRT set up a track day at Willow Springs Raceway for a full session of inspiring 2.5-mile long hot laps. Since The Nine Turns of Willow presents an array of technical challenges for any driver, we were able to comprehend what these SRTs were all about. My favorite was turn 8 or The Sweeper, which challenges the vehicle to maintain high-speed composure while exiting at full throttle. My drive partner and I ran through the full line-up beginning with a morning drive to Willow Springs International Motorsports Park from Los Angeles in the Jeep Grand Cherokee SRT8. What joy it was intimidating onlookers with the domestic SUV’s dominant profile and astounding athletic advantages. It’s like Troy Palamalu on a go-kart! Scary indeed.

Of course the heart and soul of SRT is the aforementioned HEMI 6.4-liter HEMI V8. Each of the vehicles are tuned to individual personalities, with the Challenger being the most aggressive and the 300 defined as the plushest, with seat bolsters, suede seat inserts, leather wrapped steering wheel, carbon-fiber trim, and panorama sun-roof. One thing they all have in common is that every line or scoop has a purpose and is fully functional to optimize vehicle dynamics. Each inherits 470-horsepower that peaks at 6,000 rpm along with 470 lb.-ft of torque. The Grand Cherokee SRT8 though, receives 465 lb.-ft. of torque at 4,200 rpm. Top speed is set at 175 mph for the cars and 160 mph for the SUV while 0 to 60 times are estimated in the high fours or 4.8 seconds for the Jeep. That’s a lot of speed for a full-size SUV that can also challenge opponents in adverse weather conditions and off-road. With massive 15” Brembo brake rotors, 6-piston front calipers and the new Jeep Selec-Track system featuring Auto, Snow, Track, Sport, and Tow modes, the Jeep’s abilities are enhanced and its offensive options are expanded. The package slightly reminds me of the Ram SRT-10 in its heyday when we would blow away sports cars and victoriously BBQ asphalt with that gigantic set of 22s.

The new HEMI is more fuel efficient than the 6.1-liter HEMI it replaces, and features Fuel Saver Technology (automatic transmissions) that de-activates half the engine when full power is not needed. Premium fuel is a HEMI prerequisite, yet the niche enthusiast group SRT is pursuing understands the quality and pricing criterion for the track-laden performance anticipated from their motorsports kin set of wheels. This is the reason the cars have Sport modes and the Jeep gets Track mode so drivers can have a bit more fun on speedways. On the Jeep, Track can be set to disengage electric stability control (ESC), allowing the vehicle to hang out a bit in corners. However, with AWD, the Grand Cherokee SRT8 is much tougher to slide through corners than say the Challenger. Add in adaptive damping suspension (ADS), which compliments your driving mood, Active Exhaust with glorious audio notes and paddle shifting for manually controlling power, and you can imagine the fun we had at Willow Springs.

The benchmark has been raised internally as telematics and audio have received major boosts. Well, the Charger and 300 benefit specifically with Uconnect Touch, which is Chrysler’s new media interface. I’m not a fan of touchscreen, but this one is particularly friendly with large icons and very intuitive operations such as real-time weather, fuel prices, sports scores and theatre showings. Harmon Kardon has expanded the playing field with a 19-speaker, high-efficiency, 12-channel surround-sound audio system with 900-watts of power that overrides any need to go the aftermarket route.

Chrysler Group SRT is onto something. They may be small in numbers, but they’re big in power. With great strategy and technique, we can foresee additional players being added to the roster. Lets hope so. And, just so we are clear, SRT offers a one day training course to owners of any of these vehicles by way of the Richard Petty Driving Experience, so they too are empowered with the skills and understanding to handle and operate their HEMI to perfection. Are you game? If so here are your pricing options.

Fuel Economy: 14/23 both auto and manual