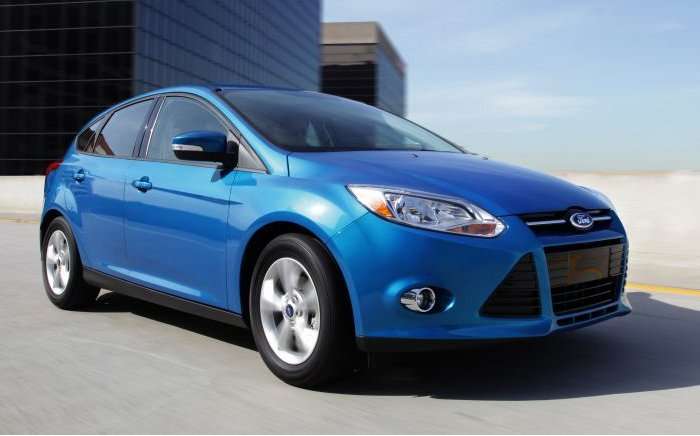 Wow! It’s as if a magician stuffed a rabbit into a hat and said, “hocus pocus,” with the end result being the 2012 Ford Focus. Amazing is what I thought upon first approach of the domestic small car during a recent test drive in Los Angeles.The new Focus looks, feels, and acts nothing like its predecessor. And it has adopted a cadre of intelligent technologies that would properly place it on par with Star Wars or Tron Legacy. Don’t believe me? Try visiting a Ford dealer and report back when done.

Literally, your mind begins playing magic tricks when you gaze at the new Focus. Like the Fiesta, Edge, Explorer and Taurus, the Focus has defined character, funky styling and muscular body parts. The front fascia takes a page from Audi and Mitsubishi with an elongated, fish mouth grille, but sets the tone with in-house artwork that results in perforated wheel arches, door indentations, integrated fog lights, creative headlamps and a nice choice of 17” and 18” rims. The Focus satisfies various consumer needs since it’s offered as a sporty 5-door hatchback or a 4-door sedan. My preference is the hatchback for more flexibility. Structurally, the Focus workout regiment has paid off due to a compilation of over 55% high-strength steels including strategic placement of super strong boron steel to the B-pillar (the vertical framing in between the front and rear door).

Inside, niftiness continues. My drive partner and I first took out an SE 4-door 5-speed manual with the optional MyFord Driver Connect Technology and SYNC package (standard on SEL models). SYNC with MyFord Driver Connect consists of two 4.2” screens placed within the instrument cluster and the center stack. Both are controlled by a 5-button pad on the right and left of the steering wheel and displays such information as trip odometer and EcoMode for the left screen and text messages and turn-by-turn navigation on the right screen. Overall, SYNC capabilities include voice-activated instructions and commands, traffic updates, weather reports, sports news, movie listings, a mobile app and much more; almost too much to detail! Although my partner drove first, I didn’t really play with the system because the screen was too small compared to what I’m accustomed to.

The general design and setup of the center stack is really cool, resembling the logo badging of the Transformers. Add in two-toned leather and those magic tricks start reappearing. Everything is futuristic about the new Focus! Though, a minor nuisance was the storage slot in between the driver and the shift lever. I suspected it was designed for cell phones, but falls short in length for both an iPhone and Blackberry.

Before my turn behind the wheel, we made a pit stop for an informational session detailing some of the highlights of the Focus. One of which was a virtual downhill skiing game, which compares to the Focus’ standard torque vectoring control says Ford. Skiers use the pressure of the outside ski to track themselves back into the intended direction. Torque vectoring is normally used on performance enhanced all-wheel drive vehicles like the Mitsubishi Evo and shifts traction from side to side. So in turns a vehicle is able to maintain acceleration with optimal grip. The Focus runs a 2-liter, direct-injection 4-cylinder with 160-horsepower and 146 pound-feet of torque. The engine is very efficient and achieves 40 highway mpg, but it’s hardly a performance package, even with the sports suspension. On the ride back I took the wheel of a Titanium hatchback with the 6-speed PowerShift automatic transmission, which struggled up hills and offered no prominent acceleration. At times I had to downshift and max out the rpm to initiate any type of reasonable passing power. The Focus definitely needs Ford’s EcoBoost or some type of turbocharging.

The Hatchback was equipped with a full navigation system that comes with an 8” touchscreen and the advanced MyFord Touch. I think Ford is playing it forward with the new connected, multi-media interface, but as intuitive as it was, I didn’t feel comfortable accessing the small and multiple touch inputs. Of course you can use voice commands, but I don’t talk to cars unless they talk back. And you have to primarily guess the commands and hope MyFord Touch understands you. After a Consumer Reports “no buy” recommendation of the 2011 Explorer due to the distractions of MyFord Touch, Ford said they are working on a software update to simplify the sci-fi interface.

Yet Ford made sure they stayed ahead of the curve with additional add-ons like a 10-speaker Sony sound system, WiFi, rain sensing wipers, rear view camera, dual USB ports, HD Radio with iTunes, song tagging, electric power-assisted steering and Active Park Assist which works similar to BMW’s system. The Sedan S is the base model, while SE, SEL and Titanium trims can be had with the sedan or hatchback. Pricing ranges from $16,270 to $22,765 with additional options available.

Not very often do you see a small car with so many advancements for the price point. Again, is someone playing tricks on me?