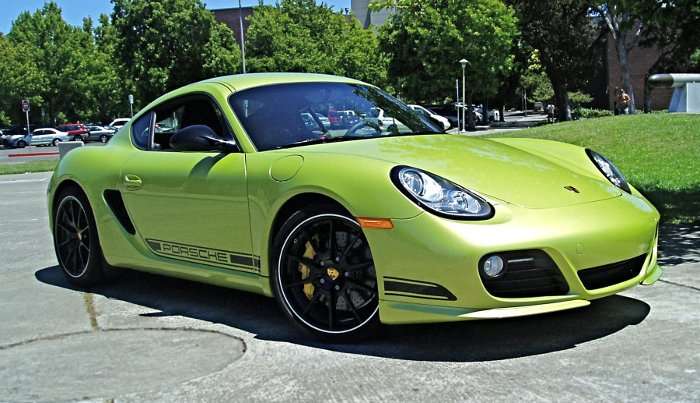 The Cayman designation seems to be growing more and more within the Porsche family. First introduced as the Cayman S, Porsche followed suite with the base Cayman, and now in the interest of radicalism we have the Cayman R for the 2012. Oh, there’s also a special Cayman S Black Edition.

The Cayman takes its name from the tropical American crocodilian of the genus Caiman and related genera, similar to alligators but with a more heavily armored belly: family Alligatoridae (alligators, etc) from Spanish caiman. Then of course, there’s always the Cayman Islands. I’m not sure what ultimately possessed the Porsche powers that be to choose the name, because the Cayman R that I tested came with an exterior finished in Peridot metallic, a very bright lime that renders it more closely to a Ninja Turtle – not a reptile or an island.

The styling of the Cayman has always been distinct and alluring – perhaps more so, than 911 or Boxster models. I first encountered Porsche’s Cayman S in 2005 as a 2006 model when it was introduced to the motoring press in Sienna, Italy. Back then, there were those who eluded to the new two-seat, mid-engine Porsche model as simply nothing more than a Boxster S with a fixed roof. They couldn’t have been more mistaken, even though 40% of the components used in the Cayman S were shared with the second generation Boxster including the hood, headlights, front guards, doors and taillights. The Cayman S was originally unveiled at the 61st Frankfurt International Motor Show. The second generation Cayman S, was introduced in 2008 as 2009 model, featuring new front and rear panels, larger halogen headlights and integrated direction indicators and new LED rear lights. For 2010 the Cayman and Cayman S came with a three- spoke Sports steering wheel as a standard feature. The Cayman Series falls between the Boxster S and the 911 in Porsche’s stable. To purists and aficionados, the Cayman coupes are arguably modern descendants of the legendary Porsche 904 and its precursor, the Porsche 550 Coupe.

The latest iteration Cayman R Coupe represents a radical departure from other Cayman models. Features include or exclude a fixed rear wing, special 19-inch light alloy wheels, carbon fiber sport bucket seats (standard sport bucket seats may be ordered as replacements), lack of a radio (one may be optionally added), air conditioning and interior door handles (a woven cloth strap is used to open the doors from the inside).

In addition to the weight loss, the 2012 Cayman R cranks out more horsepower than even the Cayman S — 330 horses at 7,400 rpm to be exact, while the torque rating remains the same — 273 pound feet at 4,750 rpm. The engine is still a 3.4 liter DOHC, 24-valve, horizontally-opposed 6-cylinder with electronic fuel injection, VarioCam Plus and high performance exhaust manifold. The Cayman R comes with a 6-speed manual gearbox with dual mass flywheel as standard fare, while a DPK dual clutch automatic is optionally available. The centered twin exhaust outlets are finished in black and emit a truly exotic note, which may be further enhanced by Porsche’s highly recommended and optional Sport Exhaust system.

The concept of the Cayman is really quite simple – maximize performance through minimization to achieve improved power to weight ratio. The Cayman R weighs 121 pounds less than the Cayman S and produces 10 more horsepower. It’s also lower by .79 inches and rides on a retuned sport suspension.

My test 2012 Porsche Cayman R Coupe came with the standard Peridot metallic exterior finish (other colors are available) and a Black interior with Alcantara seating surfaces. It was also fitted with the 6-speed manual transmission rather than the optional PPDK automatic. The base price was set at $66,300. Options included: Ceramic Composite brakes; Sound Package Plus with storage; Sport Chrono Package; Black painted alloy wheels; Sports Exhaust System and Destination Charge, which kicked the final count and amount to $81,685.

SUMMARY: The 2012 Porsche Cayman R Coupe delivers the same non-conformist, non-conventional attitude as the Boxster Spyder. Individualism is key here, coupled with an unbridled level of performance. The tilt/telescopic three-spoke steering wheel aids in achieving a comfortable driving position – that is, after actually getting into the car, which is not easy if you’re much over six feet tall, given the rigid seat edges and exceptionally low entry level.

Once settled in however, the seats are highly supportive and pretty comfortable. Turn the ignition key, fire up the engine and press both the Sport and Sport Exhaust buttons to produce what may well be the ultimate orgasmic driving experience. The thunderous exhaust tone and added throttle response are totally exhilarating.

The acceleration rate is most gratifying when pushing the pedal to the metal. The Cayman R is also quite pleasing in more docile scenarios, such as boulevard cruising. Around town, there seemed to be no need for anything above third gear, and actually, first and second gears worked very well – not perhaps the best for optimum fuel economy (EPA estimates are 19 mg city / 27 mpg highway).

Handling is nimble and responsive, with positive steering feel and the ride quality is surprisingly comfortable despite the sport suspension tuning. It’s exceptionally firm and stable, but not in the least harsh.

In the bottom line analysis, the Cayman R is a stellar two-seat coupe with phenomenal capability. It is nearly on par with the 911 in terms of overall performance, without the lofty price tag. The Cayman R with the manual gearbox scoots from 0-60 mph in 4.7 seconds. Bringing the vehicle to a halt is equally impressive with the Ceramic composite brakes. The only negative perspective I can think of is that there’s no open-top Cayman model!

PrevPrevious2012 Scion IQ: Move over Smart
Next2012 BMW 650i Coupe: Power on DemandNext