Welcome to another generation of Toyota’s family of Prius vehicles, which has now expanded to include a cadre of newer editions — all of them hybrids. Toyota has labeled the latest additional model for 2012 the Prius V, which is essentially a station wagon. The Prius V is a more family oriented version of the popular hybrid designed to serve the needs of those requiring more interior space but still favoring a hybrid vehicle. The Prius V is six inches longer, an inch wider and three inches taller than the regular Prius Hybrid sedan.

Officially labeled a mid-sized wagon according to the EPA, it’s big enough to hold three rows of seats for a version that will be sold in markets outside the U.S. Some of the extra interior space comes from the use of smaller lithium ion batteries that store the same amount of energy utilizing less space and weighing less. The Prius V provides 34.3 cu. ft. of cargo space with the seats in the upright position, but if you fold the rear seats down, that space increases to 68 cu. ft. Amazing. That’s 58% more cargo room than the current Prius liftback. Yet, the Prius V gains only 232 pounds in overall weight.

There are few mechanical differences between the station wagon and the liftback. They both utilize the same 1.8-liter four-cylinder powertrain, but the wagon uses lithium ion batteries to provide the electrical power. The front suspension is the same, but with revised bushings as well as spring and shock rates. These factors are a function of varying load size expectations. The rear suspension is a single beam trailing arm. The Prius V employs a new pitch and balance control system, in which the engine management computer senses and changes torque to react to the front suspension’s up and down movement in the interest of smoothing out the ride characteristics for increased comfort and efficiency.

Toyota chose lighter materials in the cabin, which still provide the same level of safety. For example, the sunroof is not glass but resin. Yet, in spite of all the modifications, the EPA fuel efficiency numbers drop to 44 mpg in the city and 40 mpg on the highway for an average efficiency of 42 mpg. This represents a fair drop from the Prius sedan which achieves 50 mpg overall, so the ownership cost of the bigger vehicle figures to be higher.

While the Prius V retains basically the same interior, there is a newer, better-looking and more effective instrument panel. A navigation system is available as well as an optional JBL audio unit. It is the first Toyota to have the company’s new audio control system that they call Entune, which syncs smart phones to the wagon. 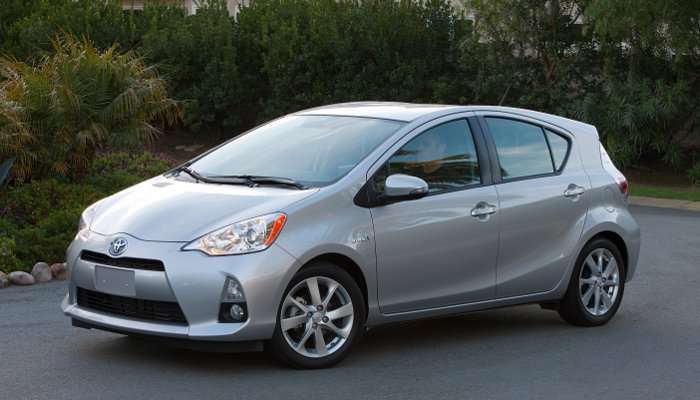 There are plenty of technological features, such as the advanced parking guidance system, adaptive cruise control and a pre-collision system which reduces the seriousness of accidents. The Prius V comes with Toyota’s Star Safety System and includes the normal electronic safety assists, such as traction control, vehicle stability, antilock brakes etc.

There will be three trim lines: Prius V Two, Prius V Three and Prius V Five. Each offers various levels of features and equipment. Prius has the highest brand awareness of any hybrid on the market, and Toyota has sold more than 2 million copies globally with half having been sold in the U.S. It also has the highest owner loyalty rating of any mid-sized car — hybrid or conventional — while outselling all other hybrids combined.

Eventually there will be four Prius models. But for now, there’s the Prius sedan and this fall the Prius V Hybrid wagon, which will come with a slightly higher price tag than the existing liftback sedan. Toyota officials see the Prius V wagon representing 15% of total Prius sales. The Prius Plug-in will arrive next year along with a smaller model, based on the PriusC concept car, which will debut in the future.

Prius began life as a serious niche car for people wishing to make an environmental statement. Now with the Prius V Hybrid wagon, one can make that same statement while hanging with the family.