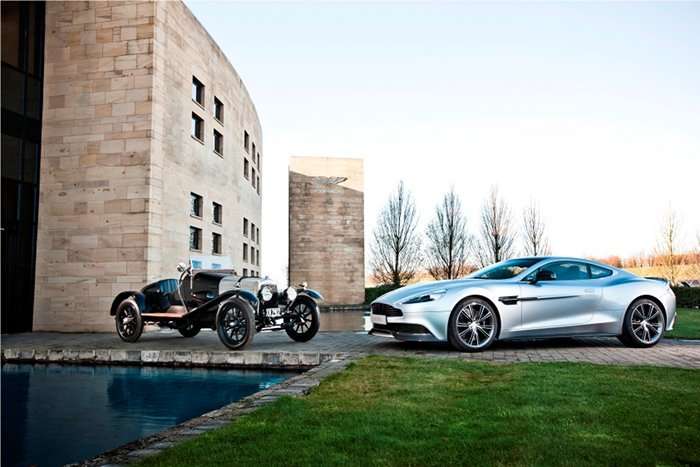 2013 sees Aston Martin celebrate its centenary with a year-long calendar of exceptional events.

The globally-renowned British luxury sports car maker will mark its first 100 years with a series of UK and international celebrations highlighting the unique success of the brand worldwide.

Boasting the strongest product line-up in its 99 years to date, Aston Martin has recently introduced its new ultimate GT – the exceptional Vanquish – and timeless new DB9. The new cars have been unveiled to global media acclaim and, in the case of the Vanquish, numerous prestigious awards.

Aston Martin has also played a key role in one of the year’s most hotly-anticipated films, with the iconic DB5 stealing the automotive limelight in the latest James Bond blockbuster, Skyfall.

15 January 2013 marks the official incorporation of the company 100 years ago and to commemorate the historic occasion the oldest surviving Aston Martin – A3 – and a stunning new Vanquish, the brand’s ultimate GT, will take their places at a photo call at Henniker Mews in Chelsea – the original home of Aston Martin – where a commemorative plaque will be unveiled.

In the evening of 15 January the Aston Martin Heritage Trust Walter Hayes Memorial Lecture will take place in central London with A3 and Vanquish again guest starring alongside actor Sir John Standing as Lionel Martin, telling the story of his early days and his experience of making the first Aston Martin in Lionel Martin’s own words.

The centrepiece of the celebrations will be a week-long festival of all things Aston Martin which is set to take place from 15 July to 21 July next year. Designed to appeal to owners and enthusiasts of the brand, the Centenary Week will include open house activities at Aston Martin’s exclusive Gaydon headquarters, including factory-based events and driving tours.

The week will culminate in a 1,000-guest ‘birthday party’ on Saturday 20 July and a spectacular Centenary Concours event in central London on Sunday 21 July.

This highlight of the centenary celebrations will be held in central London in partnership with the Aston Martin Heritage Trust and the Aston Martin Owners Club. It will feature the 100 most iconic cars in a concours display and up to 1,000 Aston Martins forming the largest gathering in the 100-year history of the great British marque.

A number of centenary drives will also be held to coincide with the birthday party and the concours event. These will include a James Bond-themed route around England and Wales taking in a number of the iconic Bond film locations, a drive through the Highlands and Islands of Scotland and a rally through six European countries in six days. In America, the Pebble Beach centenary drive programme offers an opportunity to visit some of California’s most scenic regions before spending the weekend at the legendary Pebble Beach Concours d’Elegance.

To mark its first century in business, Aston Martin has created a special centenary logo: a dynamic spiralling design derived from the nautilus shell, one of the most perfectly proportioned and mathematically precise objects found in nature. Ninety nine points arranged in an elegant helix spiral out from the Aston Martin logo and culminate in a red ‘100’ to mark the celebration year. The logo has been designed to express forward motion while also acknowledging the importance of the past.

They called their company Bamford & Martin which later became Aston Martin, acknowledging Robert Bamford’s success at the Aston Clinton Hillclimb in Buckinghamshire, where he had successfully raced their very first cars.

Bamford and Martin began their business in Chelsea’s Henniker Mews in London, becoming well known as providers of sporting machines to enthusiastic racers and discerning enthusiasts.

In the century that followed Aston Martin has come to represent many things, from sporting prowess through to technical innovation, beautiful design, fine craftsmanship and superior performance.

In Aston Martin’s first 90 years the company built fewer than 15,000 cars. The open bodied two-seater sports specials of the pre-war years gave way to the David Brown era of the 1950s and beyond which saw the introduction of the legendary DB2/4, DB4, DB5, DB6 and DBS, before the V8 Vantage and Virage led Aston Martin to the DB7, original Vanquish and on into the modern era.

A second celebration sees Aston Martin mark its first decade at Gaydon, in Warwickshire, moving in to its purpose-built premises on 3 January 2003. Since that date Aston Martin, overseen by CEO Dr Ulrich Bez, has produced 45,000 cars to huge critical and commercial acclaim.

The original DB9 and Vantage were joined by the Rapide, DBS, Virage and now the timeless new DB9 and ultimate GT, the Vanquish – Aston Martin’s latest flagship sports car.

Aston Martin is, too, no longer focused on the domestic market but an international player, exporting 75% of its annual production around the world to 146 dealerships in 41 countries.

For further updates view the centenary web page and sign up to receive the newsletter www.astonmartin.com/100.