There are more than one million of the popular Lexus ES sedans currently on the road. The latest ES350 is all-new while the first ever hybrid in the ES series makes its debut as the ES300h which is the first ES to become available with Lexus Hybrid Drive.
The 2013 Lexus ES displays a longer wheelbase than its predecessor along with an increased overall length. Its width remains the same, but it sits lower, while showcasing a progressive new design, enhanced performance and handling characteristics with elevated levels of refinement. 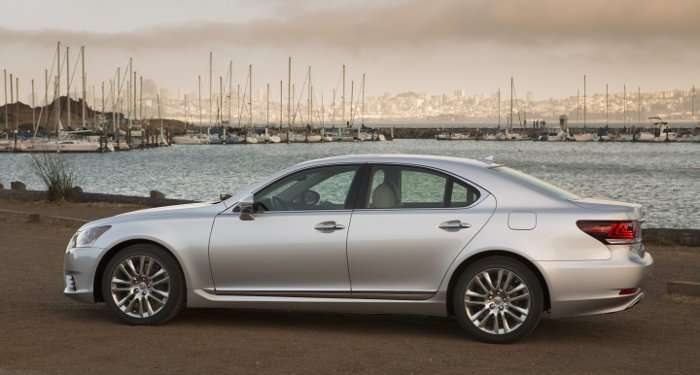 In terms of exterior styling and design, both four-door, five-passenger ES models appear the almost identical except for the rear fascia, badging and specific wheels. Both will lead off featuring Lexus’ signature spindle grille (more reflective of an hour glass really). The grille is flanked at the top by the wraparound headlamps and in the lower fascia by integrated fog lamps. The profile is low and sleek with simple, smoothly flowing lines from front to rear, where the greenhouse, with its blacked-out “B” pillar and coupe-like imagery sweeps almost to the trailing edge of the abbreviated decklid. The lower rocker is pinched in with an accent line movement to the rear wheel well, and the shoulder flows along just outside the hood to the taillamps. The rear fascia differs from the ES300h to the ES350, in that the ES350 displays split dual exhausts integrated into a blacked out diffuser panel, while the ES300h features a subtle horizontal lip, with the exhaust nearly hidden from view.

The interior of both cars is equally similar in appearance except for the trim accents – the ES300h trim pieces are executed in Bamboo, and the ES350 elements are done in polished Maple. The cabin design provides a sense of both openness and security. Rear seat leg and knee room have been increased, along with additional headroom and foot room. Seats are sculpted and now provide even greater comfort than before, with 10-way adjustable power (a 12-way power seat is optionally available with an extendable thigh support cushion. Double hand stitching add an elegance to the interior ambience.
The cockpit is divided into two separate zones: a display zone, and an operational zone. The instrument panel features a long layered look, placing the main information display directly in the driver’s line of sight, supplemented by a center-mounted 3.5-inch TFT multi-information display. The Remote Touch Interface (control mouse) has been enhanced for more intuitive operation and menu selection.

Power for the ES350 is delivered by a 3.5-liter, DOHC, 24-valve fuel injected, dual VVT-i V6 with electronically controlled sequential fuel injection and all-aluminum construction. The V6 produces 268 horsepower and 248 pound feet of torque. The ES300h is powered by a 2.5-liter Atkinson-cycle, DOHC 16-valve inline four-cylinder with electronically controlled sequential fuel injection and Variable Valve Timing (intake) with intelligence. It generates 156 horsepower from the engine alone (total horsepower from the Lexus Hybrid Drive system is 200), while producing a like amount of torque (156 ft./lbs.) Both engines reside up front in a transverse orientation, and both are front-wheel drive, with the driving force for the ES350 geared through an electronically controlled 6-speed automatic with intelligence and sequential shift, while the ES300h is equipped with an electronically Controlled Continuously Variable Transmission There are three selectable drive modes: Eco; Normal an Sport.

I was afforded the opportunity to drive pre-production versions of both ES models: a ES300h with a Silver Lining (a new color) metallic exterior finish and Black interior with Bamboo accents; and an ES350 sporting a Matador Red exterior and Gray interior with the polished Espresso Bird’s Eye Maple trim. Official pricing will not be available until close to the August on sale date. Expect a minimal increase over 2012 ES350 model pricing, whose base price was $36,725 but with added value packaging. There is no precedent for the first ever ES300h hybrid.
Both 2013 ES models deliver an outstanding ride quality, along with the handling characteristics that one would expect from a luxury sport sedan.

The power output is noticeably different between the two models – the ES350 being the better overall performer. The ES300h adds an EV mode that allows for short distance drive on electric power at reduced speeds (up to 25 mph) from the Hybrid battery pack only, with a seamless transition between gas and electric operation.
Safety features for both models include: Blind Spot Monitoring; Rear Cross-Traffic Alert; Lane Departure Alert; Automatic High beam control; Auto Location; Whiplash Injury Lessening front seats; Pre-Collision System; 10 airbags (best in class); and Lexus Safety Connect with Enhanced Roadside Assistance and an Emergency Assistance Button, along with Stolen Vehicle Location services and Automatic Collision Notification with a one-year trial subscription.
Personal connectivity is provided through Lexus Enform with App Suite along with the optional HDD navigation System with voice command. Lexus Enform allows being in touch with Bing™ search, iHeartRadio, MovieTickets.com, Open Table, Pandora, Yelp and Facebook Places through compatible smart phones. A Premium audio system is standard with the availability of a 15-speaker 835 watt Mark Levinson audio system with an 8-inch display screen.
Enhancements that would make the ES models even better would be paddle shifters for the ES350 and a repositioning of the Remote Touch Interface closer to the driver as it is in the Lexus RX350 F-Sport for a more ergonomically pleasing operation.
All new Lexus vehicles come with a 48-month/50,000 mile basic limited warranty with roadside assistance for 48 months/unlimited miles. Powertrain and restraint system coverage is provided for 72 months/70,000 miles. Corrosion perforation protection is covered for 72 months, regardless of mileage. Hybrid-related components, including the HV battery, battery-control module, hybrid control module and inverter with converter, are covered for eight years/100,000 miles.
Bottom line, the new 2013 Lexus ES series models, which comes in three trim levels (Premium, Luxury and Ultimate Luxury) now offers the equivalent of what the earlier LS models used to offer. It is a truly fine and luxurious automobile.