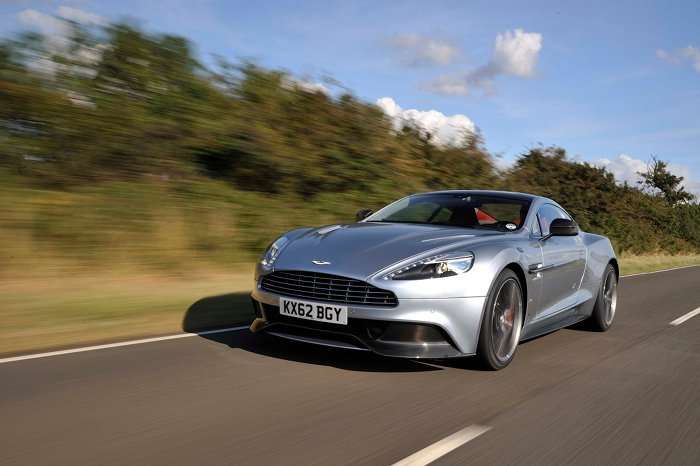 It is hand built in the United Kingdom through sophisticated craftsmanship and meticulous artisan techniques requiring 250 man hours to construct completely from the ground up. Its exoskeleton is framed from aluminum and carbon fiber for a competent, yet lightweight structure. Exemplary British fortitude equates to magnificent frontiers defining the exquisite nature of its tantalizing silhouette. A breath of life is initiated through the chronicles of 12-cylinder enhancement by way of tempered enthusiasm for motorsports performance within unwavering luxury conciliation. Ladies and gentlemen, welcome the re-invigorated 2014 Aston Martin Vanquish Super GT.

What may seem to be hyperbole to friendly automotive competition equates to truth and belief for connoisseurs of the finer things in life specifically related to the British auto industry. Where many supercars have ephemeral lifespans and limited production runs, Aston Martin keeps raising the bar with one awesome sports car after another. Whether it’s V8 Vantage, V8 Vantage S, V12 Vantage, DB9, Virage, Rapide, V12 ZAGATO or One-77, the sports car maker from Gaydon is primed for success given their reputation for beautifully styled, detail oriented Coupes and Volantes (convertibles) that spark deep emotions within their owners. Thus, each has dual temperaments that cast off signals as sizzling as a forbidden romantic partner or as mysterious as a double agent entrapped in British espionage. And now that the Vanquish name has been restored to order, ultimately “vanquishing” the DBS into retirement, Aston Martin can begin its newfound future with the flagship of the family dictating orders.

To define the technology and characteristics of the new Vanquish, Aston Martin set up racetrack sessions and technology workshops at NOLA Motorsports Park in New Orleans. Any racetrack is the perfect scenario, as Aston Martin is endowed with motorsports history and track experience. The first classroom tutorial emphasized the structure of the Vanquish, which integrates aluminum and carbon fiber to complete the VH architecture and carbon fiber body panels (first all carbon vehicle) to improve torsional rigidity by more than 25%. To be specific, the hood, trunk and doors are all carbon fiber. Aston Martin chose this manufacturing process since carbon fiber has the following properties:

Needless to say, some of the intricate details of the Vanquish were made possible due to engineering such as the integrated rear spoiler, which is embedded into the decklid and allows the wind stream coming from the roofline to pass through its aero duct creating supplementary downforce. And the more you walk around the Vanquish the more lines you discover such as the two insets within the carbon fiber roof (borrowed from the One-77) that guides the aforementioned air flow through the rear of the vehicle. Actually, every defining part is for aerodynamic purposes. Not one piece is for show. Even the grille insets have been restyled to allow in more air for cooling the powerful V12.

On the circuit, I enhanced my feel for the car behind the rectangular, F1 style steering wheel (optional — borrowed from the One-77) before lesson two began. Partnered with legendary British driver Les Goble who taught Daniel Craig all of his DBS moves from Casino Royal and Quantum of Solace, I felt secure and confident. Generating 565-horsepower and 457 lb.-ft. of torque from Aston Martin’s naturally aspirated 6.0-liter V12 engine, the authoritative coupe sprints 0 mph to 60 mph in 4 seconds. Top speed is set at 183 mph. Shifting is enabled by Aston Martin’s rear-mid mounted 6-speed Touchtronic 2 automatic transmission with shifters mounted on the steering column. Yet, I prefer my shifters on the actual steering wheel. Aston Martin also lowered the engine 19 mm in the chassis for optimal performance. The Raceway was flat but flowing and allowed the Vanquish to showoff one of its key attributes which is the Adaptive Damping System with three interchanging damping modes: Normal, Sport and Track. In Normal mode the vehicle is a bit loose and rounds corners with a lean. Sport tightens all systems up a bit while Track turns the Vanquish into a true GT whereas it hits turns like Jamaican sprinters in the 4 x 100 relay.

Sitting astute with flair and poignancy, the Vanquish receives some styling cues from both the DBS and the One-77. The remaining 75% parts are all new. Both the front and rear end are broad with bolstered wheel arches that house Pirelli P Zero 255/35 ZR20 front tires and extremely wide Pirelli P Zero 305/30 ZR20 rear tires. Sizeable ventilated carbon ceramic discs slow the Vanquish down with six-piston front and 4-piston rear calipers. A plethora of procedural safety systems include Dynamic Stability Control with Track mode, Anti-lock Braking System, Electronic Brakeforce Distribution, Emergency Brake Assist, Positive Torque Control, Traction Control and Launch Control, which was yet another track tutorial. Simple to engage, admittedly I was not impressed with the takeoffs the system provides. It felt no different then when simply flooring it.

Sexy and succulent is an understatement when describing the lavish interior of the Vanquish. For example, the resilient red & black full leather cabin and carbon fiber trim I experienced in the Skyfall Silver model was exemplary. Contrast stitching, Alcantara headlining and an embedded carbon fiber center stack was most impressive. Insert the glass key into the center positioned starter and the Vanquish comes to life like a grizzly bear fresh out of hibernation. Sounds like one as well since the exhaust system has too been borrowed from the One-77! The driver and passenger also receive more room due to the entire fascia being moved forward and the “soft close” trunk is much larger. The 6.5” LCD screen rises out of its flush position to display Aston Martin’s new infotainment system (Ami), which was a must to align them with highly engaging multi-media units from their competitors. Of course I didn’t experience Ami much as we spent the day on the track, but from what I gathered the haptic feedback interface is heading in the right direction. Especially since it features a Wi-Fi hub, rear view camera, Bluetooth technology, and iPod connectivity. Another favorite is the 1000-watt Bang & Olufsen 13-speaker audio system which is standard.

Aston Martin has the 2014 Vanquish set to launch in the spring of 2013. Currently taking orders, the 2+2 starts at $279,995 (includes $2,600 gas guzzler tax) with a $2,115 destination & delivery fee. Of course your Vanquish can be made to order by altering colors, materials, and trims or one can choose from AM’s itemized list of features. Some of which include Black-vaned grille, Magnum Silver or Black Mesh finish, Matt black textured tailpipe, Black, blue, yellow or red calipers, and exposed carbon fiber roof panel, door mirror caps, side strakes, and door handles for example. Bespoke builds are the British way — it’s in their nature!