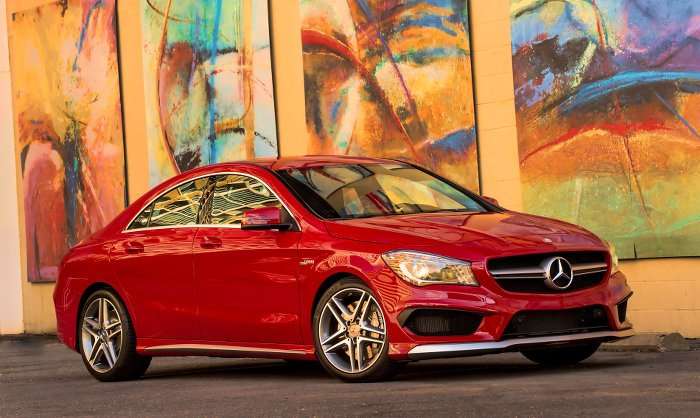 Growth is the name of the game in the luxury automobile business. One year you are selling 50,000 segment models and the next two years you are tripling production to stay ahead of or with the current leaders. Fortunately for Mercedes-Benz they are sitting atop the number one spot in overall luxury sales this year, slightly ahead of BMW. In fact, Mercedes will be launching 30 new or revamped products in the next seven years! Well, we all know with business, to be the best you have to beat the best. So the German automaker from Stuttgart decided to create a new vehicle within its product portfolio titled the CLA, which they’ve been developing for the past five years. Think of a C-Class Coupe with fours doors, or a smaller CLS.

Beginning at $29,900, the 2014 CLA250 is one of the first Mercedes-Benz vehicles that will become a multi-product platform with the GLA Sport Ute coming shortly behind it. All of sudden they are competing in a segment with the likes of the Volkswagen CC. We’re not sure if this is good or bad in terms of brand perception, but at least they are giving it a shot. This new fervor within the company stems from the desire to reach a customer they have yet to speak to. The CLA attracts an auto population who never considered the brand before and helps them with becoming more relevant with Gen Y. It’s the reason the CLA was launched socially on Instagram. Eventually Mercedes will set it up to be a volume car like the C-Class, but knows this movement will take time. “We aim to reach new target groups with the CLA – including those who never wanted to drive a Mercedes,” stated Dr. Joachim Schmidt, executive vice-president Mercedes-Benz Cars, Sales and Marketing.

To experience this younger and vigorous new vehicle we headed to lively Georgetown in Washington, D.C. for a day of testing around the city and the country environs of western Virginia. Right off the bat I must say the CLA250 is not the most exciting Mercedes-Benz on my wish list. It looks short and stubby, is very small inside, and doesn’t offer the level of sophistication of its bigger brothers. This is to be expected with a vehicle starting under $30,000, but again, your first thought is “it’s a Benz!” It is wider, lower and about 1.5” longer than the C-Class, but the proportions aren’t too attractive. Upgrading to the $47,450 CLA45 AMG adds passion to both the performance and aesthetics of the vehicle.

In a nutshell the CLA rides on a Front-Wheel Drive (FWD) platform and performs with a 2-liter, I4 turbo engine with 208 horsepower and 258 pound-feet of torque. An All-Wheel Drive (AWD) 4MATIC version will make its way into the stable next year. Fuel mileage is impressive at 26 mpg city and 38 mpg highway. Acceleration was fair and top end torque for pulling away in higher gears was decent. After all, the 0 to 60 mph time is only 6.9 seconds. Using the smaller paddle shifters is the better route for extracting every bit of power out of the engine. Steering is firm and the torque steer found in most FWD turbo powertrains is not part of the acceleration equation. A 7-speed Dual Clutch Transmission (DCT) with three driving modes was engineered specifically for the CLA and shifts admirably. The ignition requires a physical key and is devoid of a Push/Start button. But it does have a Start/Stop engine cut-off system for fuel efficiency. The steering wheel is thick with thumb indents for a sporting feeling while the tilt/telescope operation is manual. We didn’t have a sunroof in our test vehicle but it was equipped with the optional $2,370 Multimedia Package that gives you the COMAND System with Navigation through the 7” LCD that sits externally on top of the dash. Both front occupants have standard powered seats while the heating feature is optional at $580.

On the other end of the spectrum is the CLA45 AMG which is greyhound fast. It’s not super aggressive like teammates who hone V8s and V12s, but it gets the job done. The 2-liter I4 turbo with 355 horsepower and 322 pound-feet of torque is snappy and fires off like 4th of July celebrations with the assistance of AMG’s variable performance exhaust. How nasty do you want to hear it is the question. Optional $850 Black 19” alloys are adorned with red brake calipers for a “fatal attraction” appearance. The CLA45 AMG also utilizes the 7-Speed DCT but much more effectively since there is more torque to manipulate. This vehicle represents the first AMG with a 4-cylinder engine, and scoots from 0 to 60 mph in an estimated 4.5 seconds. Torque is delivered 100% between 1,250 and 4,000 RPM and meets the pavement through Mercedes’ standard 4MATIC AWD. Powerful, small cars are some of the most exciting vehicles on the road and the reason why this segment is so popular. Trust me, I did not want to hand over the keys when the drive portion was complete.

Open the doors and expected AMG amenities greet you. Beginning with the new, huggable, AMG Performance Seats by Recaro and two-toned Black/Red leather, the cabin is simply electrifying. Even the seatbelts are red followed up by red stitching on the door panels, steering wheel, and dash. This go around we had the $1,480 Panorama Sunroof as well as a harman/kardon Premium Sound audio system, that is part of the $2,300 Premium Package. Harman is a household name and engineers some of the better systems in the business. The gear shifter is now positioned within the middle console opposed to the stem shifter on the steering column of the CLA250. Other items to beef up your CLA45 include AMG Carbon Fiber Interior and Exterior trim, AMG Night Styling, and the AMG Driver’s Package.

In terms of safety engineering the CLA receives a cadre of Mercedes-Benz innovations. With that in mind you feel safe and secure even when pushing the vehicle to the limits. The laundry list of items include side curtain air bags, Lane Keeping Assist, driver knee air bag, Blind Spot Assist, COLLISION PREVENTION ASSIST, ATTENTION ASSIST, and DISTRONIC PLUS.

The CLA is a brave move for Mercedes-Benz and the potential is there to capture a percentage of younger, technologically savvy buyers. Only time will tell if this new vehicle will help or hurt the company’s bottom line.

PrevPrevious2014 Jeep Cherokee: All in the Family
Next2014 Rolls-Royce Wraith: Where it does not exist, design it!Next