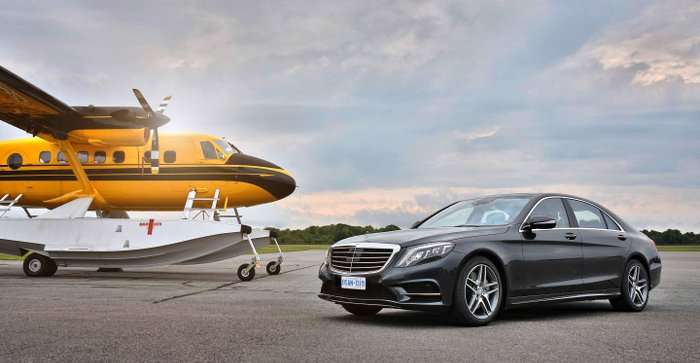 The German luxury maker from Stuttgart, Germany, walks around with an “S” on its chest, and for many reasons. Maybe because Mercedes-Benz reigns supreme in almost every luxury and performance category when it comes to its passenger cars and SUVS? Or simply because the “3-pointed star” is represented as the status quo for high society and globally recognized as a life-enhancing achievement? To demonstrate its lofty status, Mercedes just introduced to the world the 2014 S-Class, which once again defines perfection in an opulent touring sedan.

The flagship sedan has earned 110 years of brand loyalty, dating from the era in which Wilhelm Maybach developed the Mercedes Simplex 60 hp in 1903, a vehicle that opened the pathway to ultimate fulfillment behind the wheel. The S-Class has always been ahead of its time in technology, convenience, and comfort. It is traditionally the vehicle of choice for political leaders, executives, athletes, entertainers, entrepreneurs and achievers. With the S-Class at the helm, Mercedes is once again the number one luxury automaker in the United States and spares no expense to stay there for the remaining six months of 2013.

To unveil the breakthrough S-Class to international media, the German manufacturer set its sights on Toronto, Canada, with a base at the immaculate Four Seasons Hotel Toronto in Yorkville, the city’s fashionable district. Internationally known by tourists, businessmen and women, Toronto is one of the fastest growing cities in North America and plays host to people speaking 40 languages. It’s a strong and diverse region, and a staple for Mercedes customers. The company is seeing triple-digit percentage sales in Canada and felt compelled to host the S-Class here. In fact, a special S-UPPER Club was built in Germany and installed at the Four Seasons to highlight new features of the vehicle, including its superlative rear executive seating that literally put me to sleep during my rear passenger chauffeuring experience.

While some automakers devise ephemeral vehicles to play on temporary desires, the new S-Class is a permanent fixture in the company’s stable. Additionally, it seems plausible that this vehicle will set the automotive safety bar for some years to come. I was absolutely mystified at its level of innovation, engineering and safety. For example, Active Lane Keeping Assist will steer the S-Class back into its lane if the data from the stereoscopic and radar sensor detects that it crossed from its lane. The system warns the driver first by vibrating the steering wheel and then actively corrects the steering by braking the front outside wheel. Active Lane Keeping Assist is one of many driver and safety assistance technologies with the Mercedes-Benz Intelligent Drive package. The S-Class is like an owl by night and a feline by day as it’s able to detect and display areas and objects with 360 degree vision. Another feature is Night View Assist Plus, which, as its name implies, spots people and animals after sunset and alerts the driver by way of the night vision image in the instrument cluster. Collision Prevention Assist is a feature that all cars should adapt, especially with the advent of texting and driving. Essentially it helps prevent rear-end collisions by reacting to an impending impact by stopping the car if the driver fails to brake. It works in conjunction with Adaptive Brake Assist. The other programs related to Mercedes-Benz Intelligent Drive include: Adaptive High Beam Assist Plus, Active Parking Assist, Attention Assist, DISTRONIC PLUS with Steering Assist and Stop&Go Pilot, BAS PLUS with Cross-Traffic Assist, PRE-SAFE Brake with pedestrian detection, PRE-SAFE PLUS, and Traffic Sign Assist with a wrong way warning function. You could argue that the new S-class is a magic carpet populated with wondrous solutions for daily commuting that gratifies the soul physically and holistically.

Mechanically, the 2014 Mercedes-Benz S-Class is defined by its streamlined stance and efficient and dynamic mechanics. It starts with the S500’s 455-horsepower and 516 lb-ft of torque V8 engine and 7G-TRONIC PLUS transmission. Shifting between modes is accomplished by the unique column gear lever and the seven speeds can be manually shifted by paddles mounted on the steering wheel. The vehicle has power and handling, especially in Sport mode. But keep in mind this is not an SL-Class two-seater. It is long, wide and tall, and should be driven like a comfort vehicle, not a sports car. The upcoming AMG variant will handle sports duties for those who want them. There is also the option of the 306-horsepower S400 HYBRID and 258-horsepower S350 BlueTEC diesel, both with V6 engines.

My favorite S-Class feature is Magic Body Control, a chassis system that recognizes road irregularities and adjusts the suspension accordingly with 80 mm of travel either up or down. When we rode over a speed bump we felt nothing. It was at if it disappeared as the S-Class rolled over it. Magic Body Control replaces the base air suspension as a $4,450 option.

Other pleasantries and safety wizardry consist of the heated middle console, pillow-like headrests, airbag seatbelts that spread the energy load of an impact across the body, an AIR-BALANCE package for air filtering and fragrance, a powerful Burmester 3D Surround Sound System, and the First-Class rear suite which so captivated me. It’s available as an option on long-wheelbase models—the only ones sent to the U.S. The executive seat has a 43.5-degree recline and a massage center that put me to sleep within five minutes. The door houses controls to move the front passenger seat forward for full extension of your legs. Or you can choose executive mode and flip out the foldable tables to work on your laptop. So these amenities don’t compromise safety, the seatbelt also has an airbag system to prevent the passenger from sliding under the belt in an accident. A 10.2” entertainment screen is mounted on each front seatback and is operated through a remote control.

If you’re spending time up front, additional highlights are at your disposal beginning with the new COMAND system developed by HARMAN, more massaging, and the aforementioned 24-speaker and 1540 watt Burmester 3D sound system that will run you an added $6,400. When turned up the sound is similar to an iMax experience at the theatre. Two 12.3” TFT screens host all info and data from the digital tachometer to the highly intuitive and graphic navigation display. COMAND uses a central controller and 12 favorite control inputs. There is also a digital manual with video tutorials to explain the depth and breadth of this vehicle’s state of the art technologies. The Telematics componentry of COMAND offers a WiFi Hotspot provided by Verizon and apps for the iPhone, including TuneIn. In totality, all of what the S-Class offers put me in good spirits. I adapted to its sophistication quickly, connected Bob Marley to COMAND and set the driver’s seat on Active Workout massage since I had run around Toronto earlier that morning and later drove off towards a pristine lake, where the day was complemented by a well-deserved and heart-healthy Mercedes lunch!

Available in dealerships in September or October, the new S-Class already has collected 20,000 pre-orders, which should help the company meet 300,000 units sold by end of year. Official pricing ha
sn’t been announced, but expect it to start around the current base price of around $95,000. Don’t worry. This carpet is well worth its weight in gold!