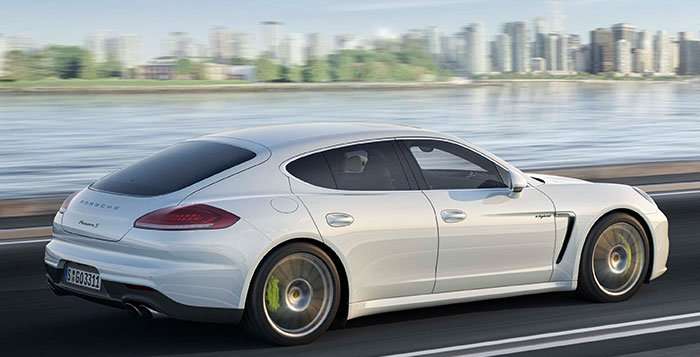 The underlying mission in most sports is to advance against opponents as quickly and effectively as possible without compromise. Dominant players and teams have no qualms lighting up scoreboards with exuberant highlights and fancy play. It’s what the fans want and expect. Porsche, too, dominates its sport with infectious energy emanating from a cadre of entertaining vehicles and SUVs amplified with unsurpassed performance engineering, unforeseen design techniques and unexpected interior craftsmanship. As always, the automotive objective relies on continually progressing forward with inventions that parallel societal expectations or overwhelmingly exceed them. Porsche has done that with the 2014 Panamera four-door sports car.

It’s 2009 and I’m sitting in a Panamera 4S with three others occupying the cabin. The driver, industry writer Lawrence Ulrich, is behind the wheel cruising softly in the heavy rains falling. But out of nowhere he shifts the PDK transmission abruptly and guns it down the motorway we were navigating, Germany’s famed Autobahn. Speeds were increasing rapidly as Lawrence was trying to hit the neophyte’s 180 mph plus limiter before traffic reappeared. I was dubious of his impromptu and silly antics until I heard him shouting, “we’re going to do it!” Well, close enough as the German sport came within one mph of tapping its top speed before Lawrence had to brake dramatically on the wet roads. Unbelievable I thought as we all extolled the greatness of Porsche’s new vehicle that carried four grown men, in the rain, without slipping, to the limits with no problems whatsoever. From that point on we were all believers of this new-to-market performance machine akin to the antics of the one they called The Great Gatsby; simply mesmerizing to the public without a trace of history or personal accomplishment.

That first year of Panamera sales was tremendous for Porsche as the small manufacturer of speed autos aggregated 6,812 sales in the U.S. and 22,518 globally. To date, over 30,000 Panameras have been driven off of dealer lots in America and more than 100,000 internationally. You can definitely say Porsche’s fourth model line is somewhat of a phenomenon. And like the widely popular Cayenne SUV, which now accounts for more than half of Porsche’s sales, the Panamera is not just another player on the team, it’s been anointed Captain’s honor. “Sales results for Panamera continue to exceed expectations. Today, roughly one out of every five Porsche models sold in the U.S. and Canada is a Panamera,” said Detlev von Platen, president and CEO, Porsche Cars North America, Inc. “The refreshed Panamera line will certainly play a key role during the remainder of 2013, as we are on track to achieve another all-time yearly sales record in the U.S.”

To ensure the company stays on a minimal level of parity with the likes of Mercedes-Benz and its S-Class, Audi’s A8, Maserati’s Quattroporte and BMW’s 7 Series, Porsche decided to enhance its successful formula with a re-engineered and re-invigorated 2014 Panamera. The adaption of the latest model is now galvanized with three new teammates in the form of the S E-Hybrid plug-in and two renditions of the stretch Executive models that are offered as a Panamera 4S and Panamera Turbo. I drove most of the latest Panameras (nine variants in North America) including those propelled by Porsche’s new 3-liter twin-turbo engine which replaces the 4.8-liter V8. It was full of power and acceleration, achieves better fuel economy (up to 17%) and receives 20 added horsepower and 15 lb-ft of torque for a total of 420 horsepower and 384 lb-ft of torque. This powerplant sees work in the Panamera S, Panamera 4S, and Panamera 4S Executive and functions fluidly with the 7-speed PDK (double clutch) transmission. PDK pre-selects gears for faster shifting during high-octane driving. In total there are five engine choices for the 2014 Panamera.

I began my misty and wet Oregon day in a $142,695 Rhodium Silver Metallic Panamera 4S with a $4,185 leather interior in Black/Carrera Red that invoked passion, spirited driving and heightened levels of luxurious comfort. Although it’s a heavy vehicle, acceleration is 4.9 seconds from 0 to 60 mph (4.6 with Sport Chrono package) and hones a top track speed of 178.3 mph. Unlike many bigger cars, the Panamera felt light on its feet and agile around seriously curvy roads. Since the Panamera’s cockpit plants you low in the driver’s position in correlation to the center console, you literally feel like a pilot, especially with its advanced array of switches, toggles and input buttons to engage various systems. For example, press the center console switch with a picture of “exhausts tips” and the vehicle sings enchantingly through every gear. Here is where adjustments can be made manually to the suspension height, transmission and throttle response, traction control, rear spoiler deployment, temperature settings and more. Select “Sport” mode, and the system begins measuring the Panamera’s road reactions and adjusts steering, throttle, damping and gearing accordingly. “Sport Plus” elevates those algorithms and remains aggressive at all times through all gears, while also holding each gear without upshifting. The busy but intelligent cockpit layout continues into the center stack which features another set of buttons to operate the navigation, audio, telematics and each convenience and entertainment service bundled in the Porsche Car Connect app. Bose audio sets your mood and the sunroof sheds light upon the impeccable craftsmanship of the interior. The five gauge circular instrument cluster is race inspiring and uses one of the gauges to repurpose and display content such as navigational instructions so you remained focused dead ahead.

Next up were the $181,185 Agate Grey Metallic Panamera Turbo and a White S E-Hybrid plug-in which both represent equally opposite spectrums of the Panamera. The Turbo expends power through its authoritative V8 which sees a 20 horsepower increase to 520 horsepower, effectively allowing the sports car to accelerate 0 to 60 mph in a quick 3.7 seconds and reach a top speed of 189 mph. Porsche’s most dominant Panamera is all about fun and play, which I enjoyed on the open Oregon country roads. Power shifting is done through embedded paddles on top and under the stealthy steering wheel. Both the right and left paddles under the wheel downshift the transmission and both top buttons upshift. Alternatively, using the gear selector in manual requires a back throw to downshift and forward to upshift. Either technique requires adjustment time if you’re unfamiliar with Porsche’s engineering formula. The S E-Hybrid plug-in on the other hand is civil and well-mannered. Acceleration is gradual and quiet as expected. It plugs into typical home outlets for convenience and is able to regenerate power for the 9.4 kWh lithium-ion battery when driving (E-CHARGE). Starting at $99,000, this model can deliver up to 22 miles on a good day in full electric mode (E-POWER) and can be spotted by its Acid Green brake calipers and trim highlights.

Keep in mind the refreshed design is minimal to non-enthusiasts. The most notable observation is the rear hatch which is less rounded. The headlights and size of the air intakes have also been modified. My day came to end with an escorted drive in the back of the $161,100 Turbo Executive which adds 5.9” of  legroom and a group of stately features such as an optional cooler, reclining seats, pillow soft headrests, and even leather wrapped and painted air vents if you so choose. It’s perfect for those who desire the best craftsmanship the industry has to offer.