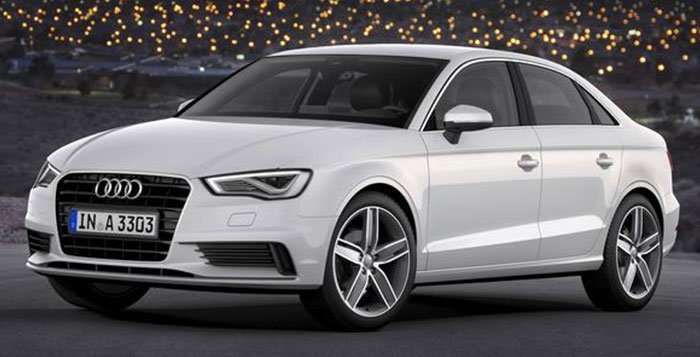 The Audi brand of today is certainly not the Audi of yesteryear. From new innovative products to defining consumer comfort features, their growth and stature has immensely increased in the last few years. For example, in 2013 the German automaker was the number one nameplate “in consideration” out of all luxury brands, the top European brand recommended by Consumer Reports, and is regarded at the the number one luxury brand among Gen X, Gen Y and Millennials. Moreover, Audi has seen average transaction prices rise to $52,000 (up from $46,000 just a few years ago) with almost no financial incentives for consumers. The new 2015 Audi A3 will help them retain this positioning and is why they have jumped into the growing “entry premium” segment early. Who wants to play catch up?

It’s no secret that I am one of the biggest fans of Audi and their quattro all-wheel drive technology. I’ve been to the 24 hour endurance race in Le Mans, France to see them dominate the competition utilizing skilled drivers and revolutionary R10, R15 and R18 supercars that power through the night burning diesel fuel (and running on hybrid power) channeled through grippy AWD traction. Automotive Rhythms has also had several long-term Audis in our press fleet, with the A8 as our all-time favorite. And I own the latest generation Q7 TDI with the S Line package and 21” gunmetal rims. In my eyes, Audi typically does no wrong. The A3 Sedan we recently evaluated outside Silicon Valley in San Francisco is another refreshing reason why Audi is trending, but I would have liked a stronger design story with this vehicle. Although it drives like a “small wonder,” there is nothing revolutionary about the exterior styling nor inviting with the interior of the latest A3. The single-frame grille is domineering as usual, but the remainder of the shape is basic. Inside, the most impressive feature you’ll gravitate towards is the retractable, slim LCD screen. When it is hibernating within the center stack, the bland console is adorned only with jet turbine looking air vents. However, for such a diminutive vehicle it has plenty of space to move around comfortably mainly due to the front wheels which now sit 1.5 inches forward.

Audi says they have not watered down the A3 and that it is still representative of true Audi driving performance, technology and packaging.

My $32,900 2.0 TFSI (all 2.0s are quattro AWD) tester was packed with an impressive 220 horsepower which felt more like 290 horsepower. It was peppy on the Northern Californian roads and offered lots of zest. And as usual, quattro assures confidence around bends at high speeds. The second engine choice is the 170 horsepower 1.8 TFSI ($29,900). Both are paired with a standard 6-speed S tronic transmission with smooth power transitions. But don’t expect paddle shifters which this vehicle is devoid of. It also lacks keyless ignition capability.  But opt for the Audi Drive Select system and the driver’s ability to adjust throttle, shifting, and the electromechanical steering algorithms are in your command. In addition, your A3 can be enhanced with either the $2,550 Premium plus (18″ rims, aluminum interior and keyless entry) or the $8,450 Prestige package (Premium plus in addition to the S Line exterior, Driver Assistance, Bang & Olufsen premium audio, Audi MMI Navigation Plus, Audi connect, Convenience Package and full LED headlights).

But no matter how exceptionally an Audi performs, its dominant attributes will always remain in the technology sector. The A3 for example receives the latest advancements from Audi engineers and from a cadre of innovation partners. One of which is with Google, a progressive partnership established in 2004. In fact, Google Earth was seamlessly integrated into Audi’s MMI multi-media system before you could even get it on your mobile smartphone. This along with Audi Connect, NVIDIA graphics, e.solutions and a Qualcomm modem, brings you Google Street View, the ability to connect a multitude of devices online simultaneously with their AT&T partnerships and voice responses for Facebook, Twitter and RSS Alerts. One of the top three telematics systems in the business, MMI has been ahead of the curve ever since its introduction. AT&T’s 4G LTE service is making its debut (out of all industry vehicles) in the 2015 A3 with a 6 month/5 gig package for $99 and a 30 month/30 gig plan for $499. When the kids can connect their iPads to the Internet and your spouse is able browse online deals, the drive experience becomes serene opposed to hours of ruckus. Also, the MyScript Touch Pad interface, introduced originally in the A8, allows you to write out vehicle commands, but I’ve never saw fit for its usage. Sometime you need to let a car be just a car.

Our Scuba Blue (black interior) A3 Sedan 2.0T quattro S tronic (Premium Edition) had a base price of $32,900 and was instilled with leather seating surfaces, speed-sensitive electromechanical power steering, “Xenon Plus” headlights with LED DRLs and taillights, and a panoramic sunroof. Already this vehicle is pretty well equipped. If you want to elevate your game as we did then of course amenities await. Our vehicle’s add-ons increased the final transaction price to $35,750 and included the $1,900 MMI navigation system, $500 Cold Weather Package (heated front seats and heated washer nozzles and exterior mirrors), $450 Aluminum Styling Package, and the $895 destination charge. Surprisingly, the 705-watt, 14-speaker Bang & Olufsen sound system is priced at $850 when it is roughly $6,500 in bigger Audi vehicles.

Sales will commence early April for the 2015 A3. To meet traffic expectations Audi dealers are preparing now for the growth that is coming such as Audi of Central Houston which recently built a 142,000 square foot dealership with 30 lifts and a 10-vehicle showroom. This $25 million investment will galvanize sales even further with impending A3 family variants like the A3 Cabriolet, A3 TDI, S3 and A3 e-tron PHEV. The future is looking quite bright for Audi and the 2015 A3.