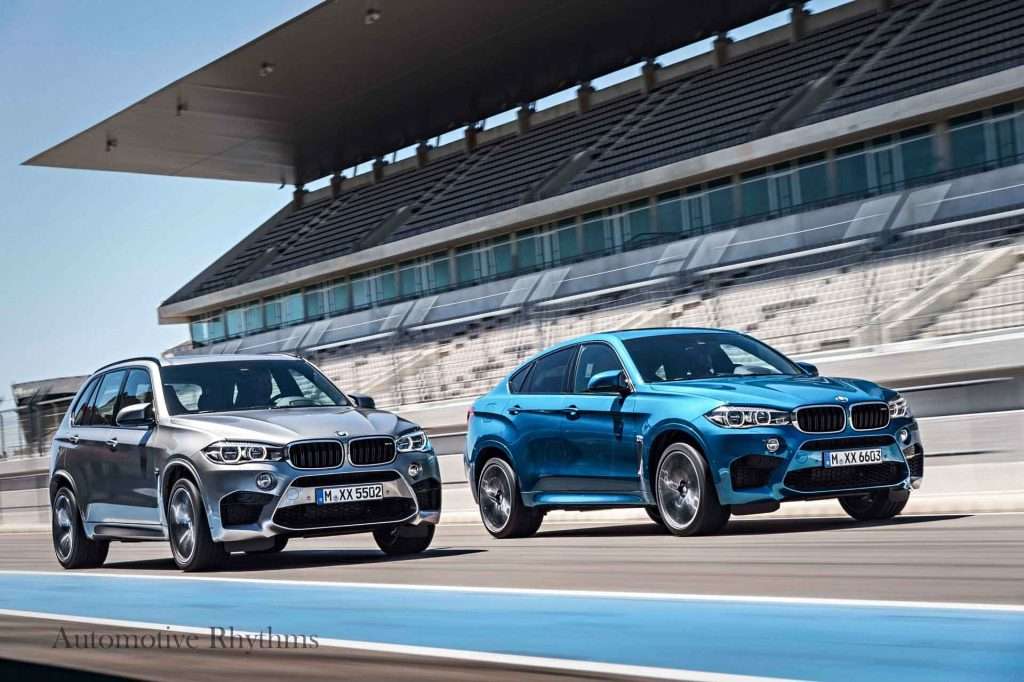 The new  BMW X5 M and X6 M see BMW M GmbH setting the pace once again in the high-performance Sports Activity Vehicle (SAV) and Sports Activity Coupe (SAC) segment. When the previous generation of the two vehicles arrived in 2009, it was the first time the high-performance character distilled by BMW M GmbH had been transplanted into an all-wheel-drive BMW X model. The result was class-leading dynamics. The new BMW X5 M and BMW X6 M pull no punches in writing the next chapter in this success story with another significant step forward in dynamic excellence, distinct M design and outstanding efficiency. The 2015 BMW X5 M will be offered at $99,650 and the 2015 BMW X6 M will start at $103,050, including $950 Destination and Handling.
The new BMW X5 M and new BMW X6 M combine the characteristic features of the successful BMW X family – exclusivity, robustness, agility and everyday usability – with the commitment to high performance that defines an M vehicle. The latter is resoundingly highlighted by the vehicles’ impressive performance figures. Both models complete the sprint from 0 to 60 mph in 4.0 seconds in conjunction with the new eight-speed M Steptronic transmission.
Innovative engine technology. 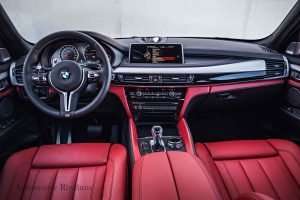 The new M TwinPower Turbo V8 for the BMW X5 M and BMW X6 M is the most powerful engine ever developed by BMW for an all-wheel-drive vehicle. Boasting innovative M TwinPower Turbo technology with a pair of TwinScroll turbochargers, cross-bank exhaust manifolds, VALVETRONIC and High Precision Direct Injection, the 4.4-liter V8 produces maximum output of 567 hp between 6,000 and 6,500 rpm. That represents a 3 percent increase over the predecessor models. The step up is even clearer when it comes to the power development of the new engine. Peak torque has been boosted by 53 lb-ft which equates to a rise of 10 percent. Its 553 lb-ft can be enjoyed across a broad rev range between 2,200 and 5,000 rpm.
At the same time, fuel consumption of the new BMW X5 M and BMW X6 M in the European cycle (official EPA values will be available closer to the start of sales) has been cut by 20 percent, CO2 emissions are likewise down by more than 20 percent, to 258 g/km. The two models accelerate from 0 to 60 mph in 4.0 seconds through the standard eight- speed M Steptronic transmission with Drivelogic. Top speed is limited to 250 km/h (155 mph).
Powerful looks and exclusive equipment. 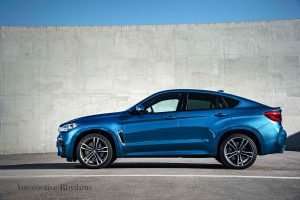 With their striking use of forms, the looks of the new BMW X5 M and BMW X6 M foretell their performance potential. With their exteriors painted fully in body color, both models cut a low-slung figure on the road, while mixed tires showcase their sporty track width. Additional exterior design modifications, moreover, elevate the M models even further than before from the standard BMW X5 and BMW X6. Large air intakes at the front end, side gills with a model badge and Air Breathers, signature M exterior mirrors in twin-stalk style, a typically M four-tailpipe exhaust system and a rear spoiler (for the BMW X6 M) give them a standalone look M fans will immediately recognize. Setting the seal on this exclusive range of features are standard M-specific, forged 21-inch M light-alloy wheels.

The high-quality interior impresses with its well-thought-through combination of sporty features, exclusive materials and flawless workmanship. The M instrument cluster, M leather steering wheel with aluminum gearshift paddles and M gearshift lever – which works in the same way as the familiar M Double Clutch Transmission gearshift lever – are complemented by electrically operated M multi-function seats for the driver and front passenger, an M driver’s footrest and the optional Head-Up Display which, in addition to the standard information, also includes an M-specific display with gear indicator, rev band and shift lights.

At BMW M GmbH, high performance is about more than engine output and top speeds alone. Here, high performance means all of a vehicle’s components working in perfect harmony and the precise interplay of various details resulting in maximum performance, agility, precision, poise and assurance out on the road. This sense of balance is a defining feature of all the vehicles produced by BMW M GmbH and is, needless to say, also present in the new BMW X5 M and new BMW X6 M.

The function-led design of the new BMW X5 M and new BMW X6 M is immediately clear with athletic, muscular looks betraying their high-performance credentials before they so much as turn a wheel. The four large air intakes and flaps at the front end, and the diffuser at the rear, are fully functional, they are an essential part of the engineers’ drive to optimize aerodynamics and ensure efficient cooling.

Thanks to a clever aerodynamics concept, the airflow is guided so efficiently around the vehicle that drag is minimized and lift is also reduced. The engine, powertrain and brakes are all kept sufficiently cool, even when placed under extreme loads on the track. Elements which look like pure design accents when they first catch the eye, in fact, fulfill functional tasks. For example, the M-specific Air Breathers behind the front wheels reduce turbulence in the front wheel arches.
Optimum temperature management.
The high-performance engine under the hood of the new BMW X5 M and new BMW X6 M requires a high-performance cooling system in order to guarantee the optimum operating temperature in all conditions – i.e. normal everyday driving, stop-start traffic and extreme action on the race track. A highly efficient, newly developed combination of low-temperature and high-temperature radiators, which also handles the cooling of the turbochargers, charge air and transmission oil, maintains an optimum temperature, even with all components working flat out.
New Eight-speed M Steptronic transmission with Drivelogic.

The new BMW X5 M and new BMW X6 M send their engine power to the wheels via the newly developed eight-speed M Steptronic transmission with Drivelogic, which closely follows the operating philosophy of the M Double Clutch Transmission used by other M models. With its instantaneous responses, rapid gear changes and direct reaction to load changes, the torque converter automatic transmission links up seamlessly with the new higher-torque turbocharged engine and showcases its talents. At the same time, its wider ratio spread allows it to offer a clear drop in fuel consumption over the six-speed transmission offered in the previous generation, as well as an increase in driving comfort and improved performance.

The new eight-speed M Steptronic transmission allows drivers to sit back and enjoy automatic shifts or change gear manually using the gearshift paddles on the M leather steering wheel. And for the perfect getaway, the driver can activate the Launch Control system adapted from use in racing vehicles. Here, the driver keeps their foot on the brakes and pushes the accelerator down almost to the floor, which prompts the system to dial in the ideal getaway rpm. Releasing the brakes prompts Launch Control to let the vehicle off the leash, and it accelerates off the line with maximum propulsion.

The driver can also use the three-stage Drivelogic function to choose whether to prioritize fuel economy, comfort or Sport performance. This functionality is available both in automatic and manual shifting modes.

BMW xDrive intelligent all-wheel drive and Dynamic Performance Control play a key role in the outstanding dynamics of the new BMW X5 M and new BMW X6 M. The xDrive system employs an electronically controlled multi-plate clutch to allow fully variable distribution of drive between the front and rear axles – from 100 percent at the rear to up to 100 percent at the front. This ensures the best possible traction in all road conditions. In the interests of greater agility, xDrive normally operates with a rear-biased torque split-in the BMW X5 M and BMW X6 M.