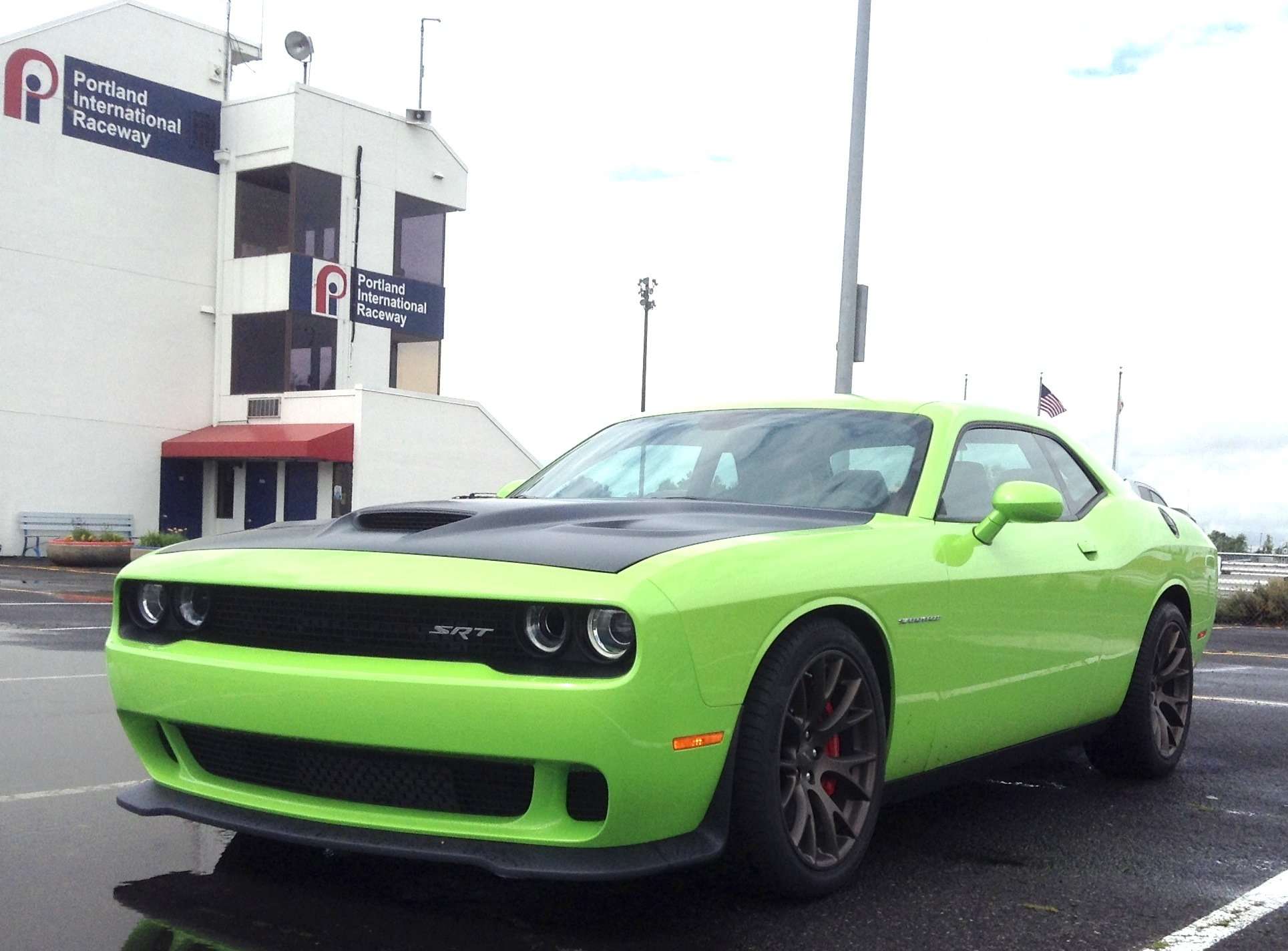 The secret is out and the Chrysler Group has engineered the most (currently) powerful muscle car on the planet. Added protein intake, countless hours in the gym and retooling of the technical aspect of the mind as it relates to sports performance and engineering has bequeathed fans with one of the mightiest of all the gladiators. Rightfully titled the 2015 Dodge Challenger SRT Hellcat, this American beast is deemed to set the streets ablaze when it arrives shortly. Not only was it created to break barriers amongst its Mustang and Camaro challengers, but the Hellcat was especially born to run like cheetahs in the wild.
Let’s get right to it, the Hellcat spits out enormous power from its 6.2-liter HEMI V8 engine which began life as a 392 HEMI (SRT reworked it by 90%). In fact, they have never offered a factory supercharged V8 until now, blessing the company with the strongest workhorse powerplant ever produced in-house. So this is a pretty momentous achievement for the boys and gals from Michigan. With 707-horsepower and 650 lb.-ft. of torque the Hellcat felt like Amtrak’s Acela train blowing by on the wet roads of Portland, Oregon during our test drive. It’s fast, formidable and sometimes uncontrollable if you call up too much power without proper agility preparation. And since we experienced a downpour at Portland International Raceway the performance aspect of our testing exacerbated quickly. Instilled with a twin-screw supercharger, new forged-alloy pistons, 275/40ZR20 Pirelli tires wrapping Slingshot, split 7-spoke, forged aluminum rims, an upgraded Brembo brake package (6-piston front calipers and 15.4” 2-piece rotors for better fade performance), a rear limited slip differential, a fully active exhaust system and the TorqueFlite 8-speed automatic transmission including paddle shifters ($1,995), the potential of the Hellcat is simply mindboggling when the aforementioned is formulated with 1200 rpms immediately available. Also, the new V8 can be paired with an updated version of their 6-speed manual with Rev Matching. Though, I instinctively prefer the paddles!
Oh, lest not forget The Matrix influence. Leave the house with the Black key fob and you’re relegated to only 500 horsepower. Take the Red fob and all 707 American steeds are in your command! 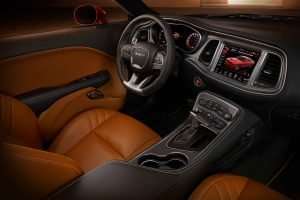 It goes without saying. “The new 2015 Dodge Challenger SRT Hellcat is the most powerful muscle car ever,” said Tim Kuniskis, President and CEO — Dodge Brand and SRT Brand, Chrysler Group LLC. “With 707 horsepower and 650 lb.-ft. of torque, we have unleashed a true GT car with an all-new driver-focused interior, the TorqueFlite eight-speed transmission and the first supercharged HEMI engine Chrysler has ever produced. The Challenger Hellcat has been released!” And for $59,995 including the $1,700 gas guzzler tax the Hellcat is the most affordable 700+ horsepower sports car on the market.
I’ve always been fond of the new Challenger ever since its debut in 2008. Naturally the muscle car is more menacing and prodigious than the Camaro or Mustang even in base form. But of course if you step up to an SRT model or customize your vehicle with Mopar parts the Dodge Challenger is always going to be the winner in my book. In fact, the vehicle continues to bring conquest buyers into the family while also maintaining high loyalty rates. After its arrival each model year continued to outsell the prior model year. Typically sales decline with buyer cycles, but the Challenger has done just the opposite. Astonishingly, sales doubled in 2009!
Sitting behind the wheel of a Sublime Green exterior and Black interior felt energizing, especially knowing what could be achieved with that type of power under my right foot. However, the left foot felt abandoned since the Challenger’s dead pedal was barely wide enough for true comfort. Dodge said they paid attention to the electronics first and didn’t focus on this detail. However, a few spirited accelerations and pinpoint braking demonstrations took precedence over any minor flaws. 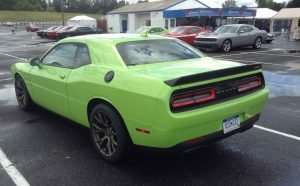 Symbolically the Hellcat makes you feel like “The Special” on The Lego Movie. Its interior needed a makeover and now parallels the exterior which was modeled after the heritage of the 1971 Challenger. The cockpit is performance oriented with a cadre of technology features you would expect in luxury performance vehicles such as heated/cooled seats, paddle shifters, flat bottom steering wheel, performance seats, electric power steering, adaptive cruise control, Park Sense, a 7” TFT gauge cluster and Uconnect telematics. Uconnect ranks in Automotive Rhythms’ top five for multi-media systems and uses an 8.4” touchscreen (or 5” screen) for most operations. Navigation is precise and detailed and apps such as Sports, Wi-Fi Hotspot, Fuel Prices, Movie Listings, Performance Pages, Dodge Performance Control and Weather keep you as connected as a smartphone. I was even able to go online with my iPad from utilizing the vehicle’s hotspot. Though, the download speed was as slow as turtles. Personalizing your Drive Modes (new feature) is also accomplished through Uconnect if your SRT is equipped with the automatic transmission. The vehicle is pre-configured for Sport, Track and Default modes in correlation to controlling horsepower, transmission shift speeds, paddle shifting, traction and suspension settings. Custom manipulates the settings to your specificity.
Of course the 2015 Challenger has the identity and soul of the original so Dodge didn’t want to reinvent the package to much. But they did desire to enhance its vantage points. A few things were done such as tweaking the brow and trimming the fat for a more athletic stance. The Challenger SRT Hellcat specifically received a more aggressive grille, a power dome, aluminum hood with the “air catcher” inlet port, the “Slingshot” Matte Black or Brass Monkey/dark bronze finished wheels, a larger and more assertive front splitter, “SUPERCHARGED” fender badges and a distinctive, taller rear spoiler. You also won’t find fog lights on the Hellcat as with most supercars.
The Hellcat is ready to run and with a NHRA certified 10.8s quarter mile time at 126 mph on drag radials all you have to do is burn baby burn. Your friends, family and admirers will envy you forever.