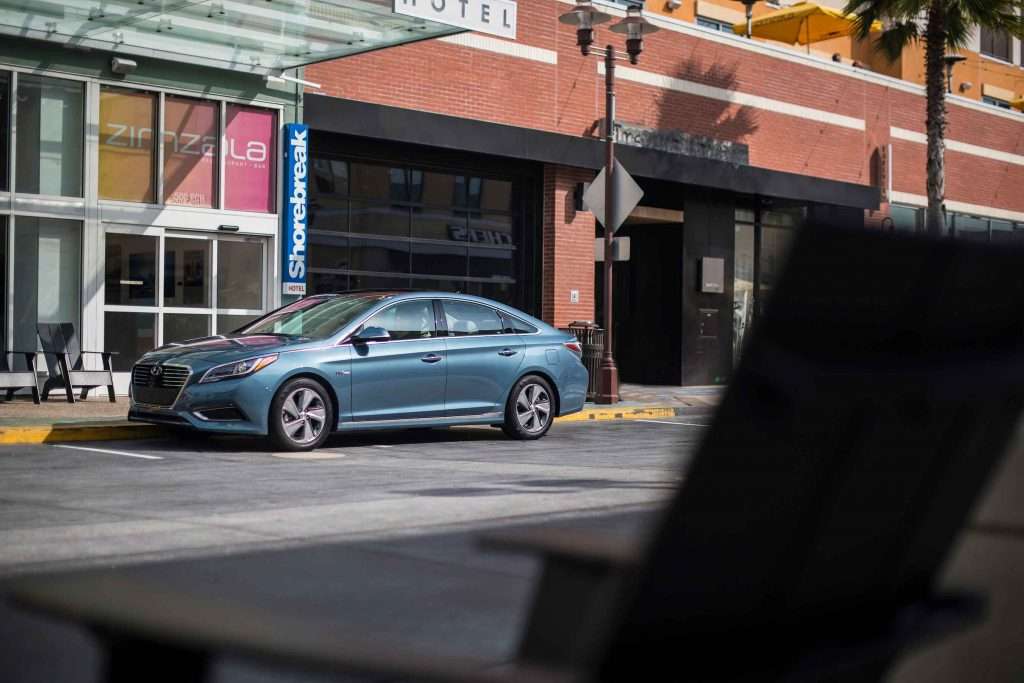 Face the reality, it’s no longer a trend but a lifestyle. Green living is becoming a conscious topic of discussion from all walks of society as it relates to the foods we eat to the vehicles we drive. The current, harsh certainty is that mankind has sickened Mother Earth and will do more harm if sentient change doesn’t come soon. For that reason brands like Hyundai are playing a pivotal role in the sustainability of the planet by way of green sensible products such as their zero-emissions Tucson Fuel Cell and the 2016 Sonata Plug-in Hybrid.

Blue is the new green in the eyes of the Koreans. This hue creates positive vibrations, tranquil emotions, clean energy and sustainable ideas. Think of the purifying Caribbean waters, the garden-fresh smell of rainfalls in forests or the liberating skies that shine sunlight upon our days. Hyundai’s Blue Drive strategy falls in line with this philosophy of a healthier world through inventive products that produce, nourish and recycle clean energy while simultaneously reducing carbon footprints. The aforementioned Tucson Fuel Cell for example excretes water for emissions and for a $499 monthly lease requires no maintenance costs from the customer. Plus, the fuel is complementary. Only 67 vehicles have been sold in Southern California (Orange County) but that will increase as infrastructure to support the energy form is expanded. This vehicle along with their hybrids has awarded Hyundai with the title of lowest CO2 production automaker over the mass marketers.

To inherit a better understanding of Blue Drive we headed to Costa Mesa, CA where Hyundai is headquartered to experience all three of their current green vehicles including the Sonata Plug-in Hybrid, Sonata Hybrid and the Fuel Cell. The plug-in hybrid is new and the standard hybrid has been updated. Both are more aerodynamic than the gasoline Sonata due to specific design implementations such as crisper front and rear fascias, defined rocker panels and frisbee themed rims that focus on minimal aero drag like that of performance road bikes. In fact, the Sonata Hybrid is tied with the Tesla Model S for Cd (Coefficient of drag) due to appropriate air management flow (Active Air Shutters, Lower Bumper Air Curtain, Rear Spoiler). A bit wider and longer than the gas model, the hybrids comprise of advanced high-strength steel that improve torsional rigidity by 41%.

With the success of any new product, whether the goal is performance or economy, the basis of accomplishment begins with the core foundation. For that reason Hyundai started from a fresh slate when they decided to construct a newfangled, eco-friendly headquarters with certified energy efficient electromechanicals (a 21% reduction from the old office). The building’s insulated and acoustic glass with automatic rising and lowering shades provides a consistent room temperature depending on the sun’s strength so the heating, cooling and electrical systems are less utilized. Moreover, Hyundai recycles the water around the property grounds. From this locale we took the coastal drive path in a fleet of electrified vehicles in route to an earth happy lunch at Torrey Pines.

From first approach the massive grille on my plug-in (two distinct grilles offered) which came with the intuitive Active Cruise was bold and strong. It’s edgy, but pure. An instagram comment from a Porsche follower said exactly, “now that’s a plug-in I’ll drive!” Keep in mind Porsche manufactures their own line of plug-in hybrids. The curvilinear rear features new lights and a slick spoiler which further improves wind resistance. Between the hybrid and plug-in hybrid the only delineating factor is the all-electric 24-mile range of the plug-in. And the thing about electric torque is that it delivers instant acceleration which I experienced on the highways. Of course it’s not the speed of the Panamera plug-in, but the Hyundai does a pretty adequate job. Combined with the smaller and 10% more efficient 2-liter GDI 4-cylinder (direct injected) gasoline engine and a 6-speed automatic transmission, total vehicle output for the plug-in is 202-horsepower. The vehicle attempts to first drive in electric mode until more power is needed in which it utilizes both the GDI and the 50 kW electric motor. Intelligence is presented by way of algorithms that monitor throttle inputs to determine what type of driver you are. You can observe the vehicle’s energetic mannerisms on screen as I did to see how much charge was being lost and gained within the 9.8 kWh Lithium-Ion Polymer battery. Charging is restored from plugging in the vehicle, regenerative braking (captures 10%) and also through coasting. 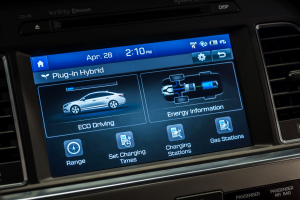 Step inside the Sonata Hybrids and you will recognize a similar interior to the gasoline models except for the unique instrumentation needed for visual analysis of the hybrid interworking. The vehicle monitors everything from charging to energy usage. The comfort of the seats are ok, nothing to brag about but the sky roof opened up the cabin with fresh air and sunlight. Head and legroom is good and the second row seats are 60/40 split folding. The trunk floor is completely flat and not compromised by the battery, which in turn provides more cargo area. Hyundai’s Navigation displays vivid graphics with a high level of intuitiveness and the Blue Link app lets owners take control of their vehicle by way of smartphones.

Hyundai has recognized their Hybrids being purchased by a younger and deeper educated consumer than the gasoline models. Offered in the states of California, Connecticut, Maine, Maryland, Massachusetts, New Jersey, New York, Oregon, Rhode Island and Vermont this fall, the Sonata Plug-in Hybrid warrants owners the eligibility of a $2,500 fixed federal tax credit and a variable federal tax credit. Other incentives include local deductions such as the $1,500 California clean vehicle rebate and the possibility HOV lane access. So there is more to eco living than just a green or blue thumb as you see.