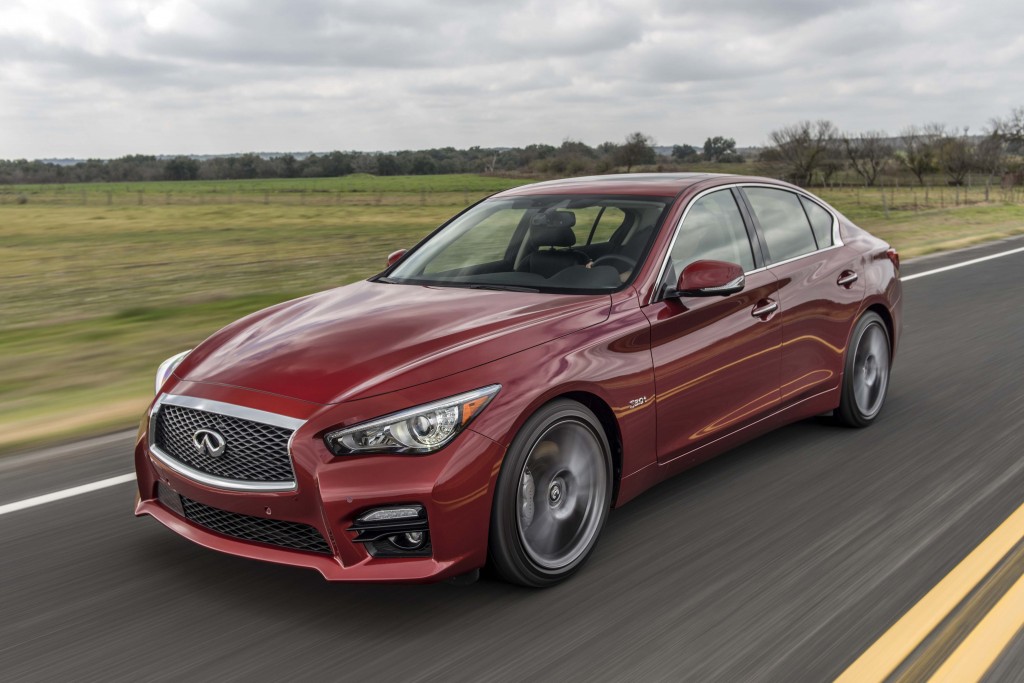 What I learned in San Antonio, TX recently is that Infiniti’s 2016 Q50 Red Sport 400 is on fire like Steph Curry from half court. Its power is voracious, its physique is impeccable, its posture is noble and its performance acumen is emblematic to Curry dribbling rings around opponents before launching and banking a “3” while fading out of bounds. Yes, the Red Sport 400 is not your average sports sedan with mundane interiors and a few pieces of body cladding. It’s “the truth” and inherent to a culture of gentlemen drivers that want more to brag about in a classy, intelligent form.

The Q50 represents Infiniti’s best selling model, so various iterations and spinoffs were important to continuous success and consumer diversity of the nameplate. If you want a hybrid Q50 then so be it. Maybe top performance is your number one pillar? Well, that’s available as well. Are you RWD or AWD driven? Either or Infiniti’s got your back with various versions of the Q50. I’m particularly fond with the agility, handling and traction of AWD sports cars, as well as SUVs and trucks. Starting at $33,950, selections include the Q50 2.0t, Q50 2.0t Premium, Q50 3.0t Premium, Q50 Hybrid Premium, Q50 3.0t Sport and the Q50 Red Sport 400. Each can be fitted with either rear-wheel or all-wheel drive and the choice of four engines are available to decipher between. Of course the multitude of options might become a daunting task when it comes to final selections, but nevertheless you have more at your disposal.

“With the expanded engine lineup, the Q50 now covers more of the market. The Q50 2.0t, for example, has a new starting MSRP of $33,950 – a great entry point for a sports sedan with the style, technology and available safety features of the Q50,” said Randy Parker, vice president, Infiniti Americas. “At the same time, we continue to offer the Q50 Hybrid, the only vehicle in its class to offer more than 355 horsepower with at least 34 mph highway fuel economy.” 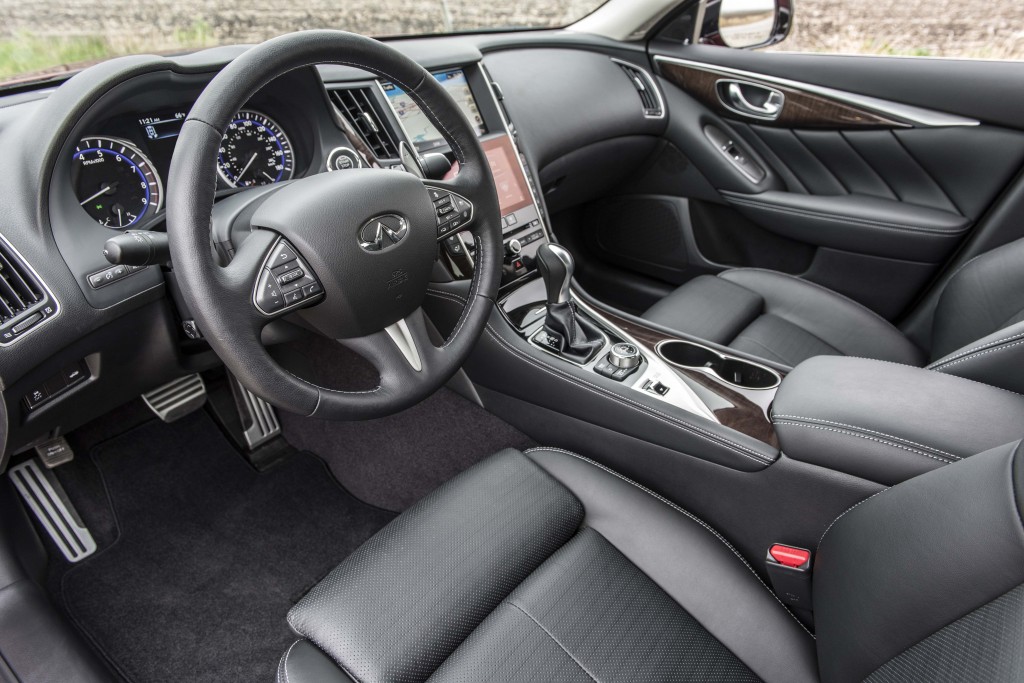 On the road the Red Sport felt just right. Its idyllic cockpit was adorned with a thick, multifunction steering wheel with magnesium butterfly shifters on the steering column, a Drive Mode Selector (DMS) with over 300 combinations (PERSONAL, SPORT, SPORT+, STANDARD, ECO, SNOW), sports seats, leather and wood infusions and a new gear shifter that feels good in hand. ECO mode however is the antithesis of how you want your vehicle to move because it’s too restrictive on throttle response. I was very uncomfortable in this setting.

Boy does the Red Sport get up to speed quickly because of the 3-liter Twin Turbo V6 engine with 400 horses, reduced turbo lag and an intercooler with dual water pumps. Requiring premium fuel, the VR-Series 3-liter for the Red Sport dishes out 350 lb.-ft. of torque between 1,600 and 5,200 rpms and partners with a 7-speed Adaptive Shift Control transmission with dual transmission coolers to manage heat. Automatic shifting is very fast and engaging to road variances, and in manual mode you can pull back on the gear shift lever to downshift and forward to upshift.

The Red Sport’s most riveting performance trait just might be its agility around high-speed turns with the help of a convergence of performance technologies. During a few skillful drills I accelerated swiftly through the test track’s slalom, then utilized abrupt ABS braking to show off the vehicle’s stopping distance, re-accelerated and sped through tight corners without breaking a sweat. For the heightened dynamics I can thank the Q50 Red Sport 400’s 2-mode Dynamic Digital Suspension which helps reduce body roll and Direct Adaptive Steering (introduced on the 2014 model) with numerous modes of personalization whether you want a heavier or lighter feel. During the driving routine I switched between the DMS’s settings to compare SPORT and SPORT+ modes, whereas SPORT+ is super stiff, allows more slip and really wakes the car up. Suffice to say I put those metal pedals through the ringer. 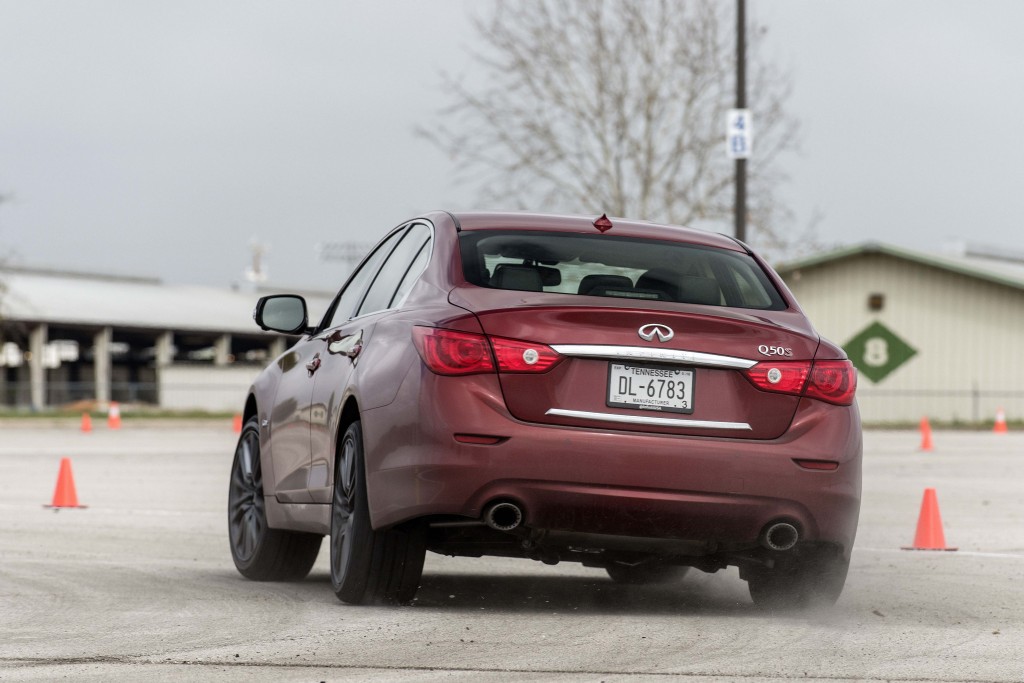 Your Red Sport will be distinguishable from the other 110,000 Q50s running the streets by its unique 19” aluminum-alloy, staggered rims wrapped in 245/40R19 front and 265/35R19 rear Dunlop summer tires (AWD is not staggered of course and receives four seasons), progressive exhaust tips and the Red S badge on the decklid and sides of the vehicle.

Inside, the cockpit is simultaneously luxuriant and technologically laden. The new integrated center stack for instance is clean and digital. Introduced on the 2014 model, Infiniti InTouch features two displays with 8” upper and 7” lower VGA LCD  touch actuated screens. InTouch will make its way in a few more Infiniti models as each receives a redesign. It handles everything from navigation to apps to customizing personal vehicles settings. Think of two iPad Minis sitting atop of one another to control all multimedia functionalities. Manual thigh extenders embedded in the sporty seats kept me comfortable while listening to the auditory vibes from the impressive BOSE 14-speaker surround sound.

Safety is always a top pre-requisite for me as well, especially with high-performing vehicles. Driver assist systems include Blind Spot Warning, Predictive Forward Collision Warning, Around View Monitor with Moving Object Detection, Forward Emergency Braking and Backup Collision Intervention (BCI) which actually and fully brakes the Q50 if an object suddenly jumps in your path. We were able to demonstrate BCI poignantly on the closed course, but thankfully I didn’t have to worry about the others. Not on all models, Active Lane Control, is another safety technology that helps to reduce fatigue in longer trips using a camera based system that monitors the lanes in the road.

Sporty, agile and as exciting to drive as it is watching the Golden State Warriors play, the Red Sport is sure to peak your interest after spending quality, one-on-one time with the Japanese sports sedan as I did.