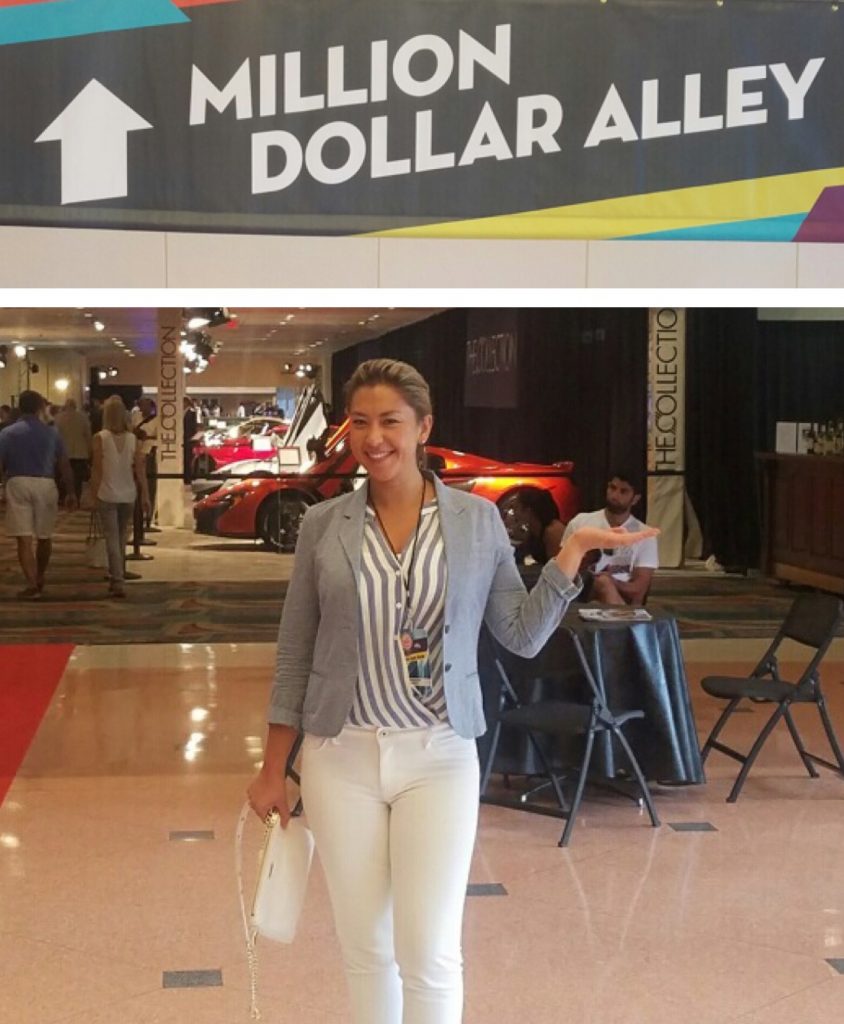 The media day of the 2016 Miami International Auto Show did not fail to bring the heat in every category this year. Starting at Lincoln Road Nissan kicked off the show by unveiling the 2017  Rogue, the latest addition to their “Year of the Truck” lineup. Performance, luxury and innovation continued to shine throughout the entire show as witnessed in the Genesis G90, the Fiat 124 Spider Abarth and the Lexus LC 500h.

There was also no lack of fun or entertainment on South Beach within the auto sector. Ally was the first company to introduce New Car Smell, an aroma counter where showgoers can sample eight different fragrances that capture the essence of different cars and their drivers. Some of the scents include Luxury Coupe, Muscle Car and Eco-friendly Hybrid. Due to its previous success, Ally brought back the Cars Meet Art exhibit including a collaboration with international artist DUAIV and the Corvette Z06 C7R Special Edition. In addition, make sure to get behind the wheel at an array of Ride & Drive events with Camp Jeep, Nissan, Mazda and Toyota to name a few. As the official NFL sponsor don’t miss a chance with Hyundai to win your very own tailgating grill set by guessing how many footballs are in the back of the Hyundai on display. Good luck tailgaters!

Though it was a race to the finish here are Automotive Rhythms’ “Top 5 Picks” from this year’s Miami Auto Show: 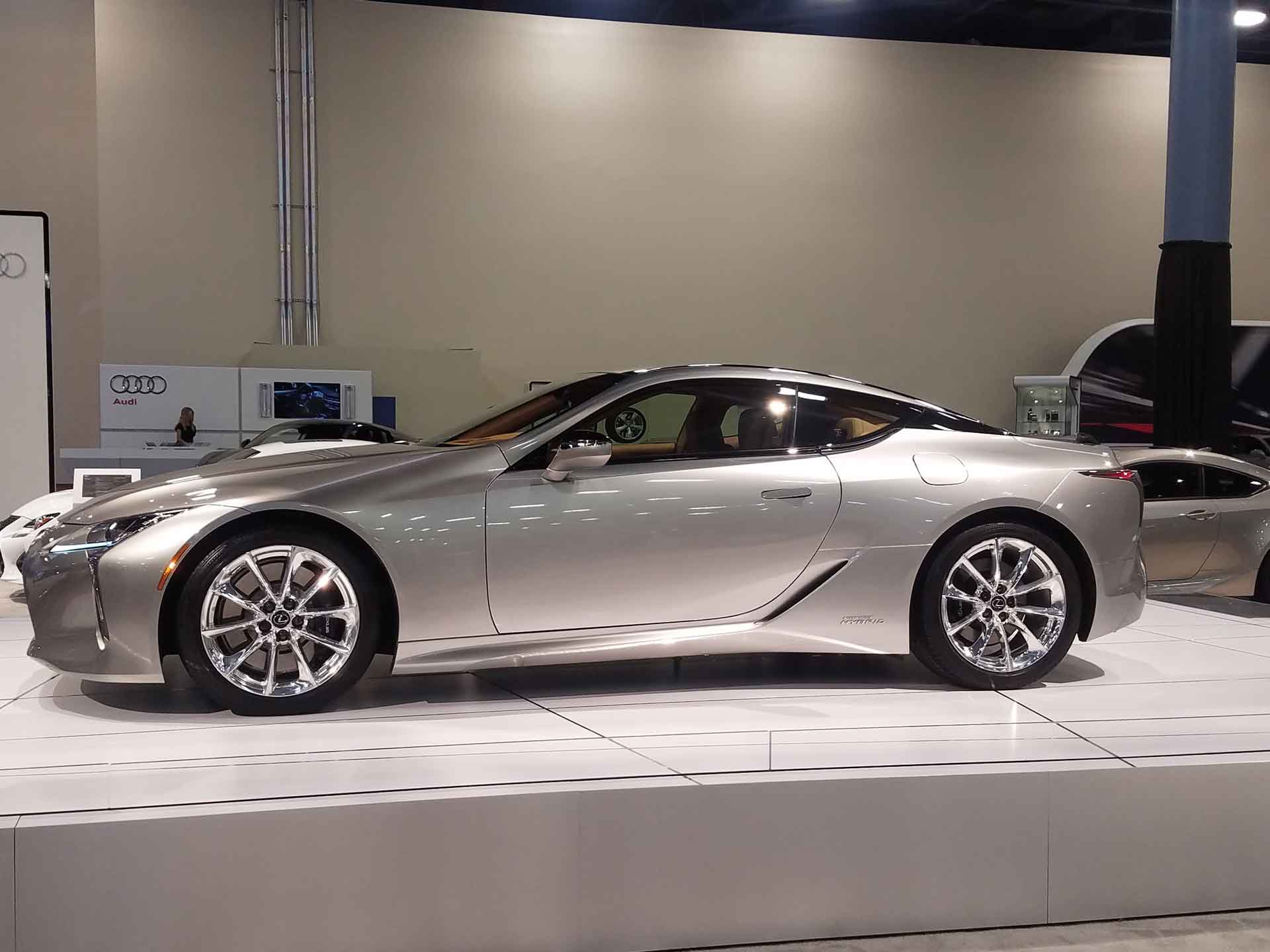 1) My number one selection is undoubtedly the 2018 Lexus LC 500h luxury hybrid coupe. This mean, eco-friendly driving machine presents a whole new meaning to going green. The next generation Multi Stage Lexus Hybrid Drive system with magnesium paddle shifters and the ability to go 0-60 mph in 5 seconds creates a beauty and a beast. Performance, luxury and security come in the form of 347-horsepower, Smart Access with push button start/stop and the Lexus Safety System. Sharing componentry with the RC-F and GS-F, a 3.5-liter V6, RWD and 20″ alloys bring the LC 500h to life. Expect the Japanese luxury coupe to hit the scene around April of 2017. 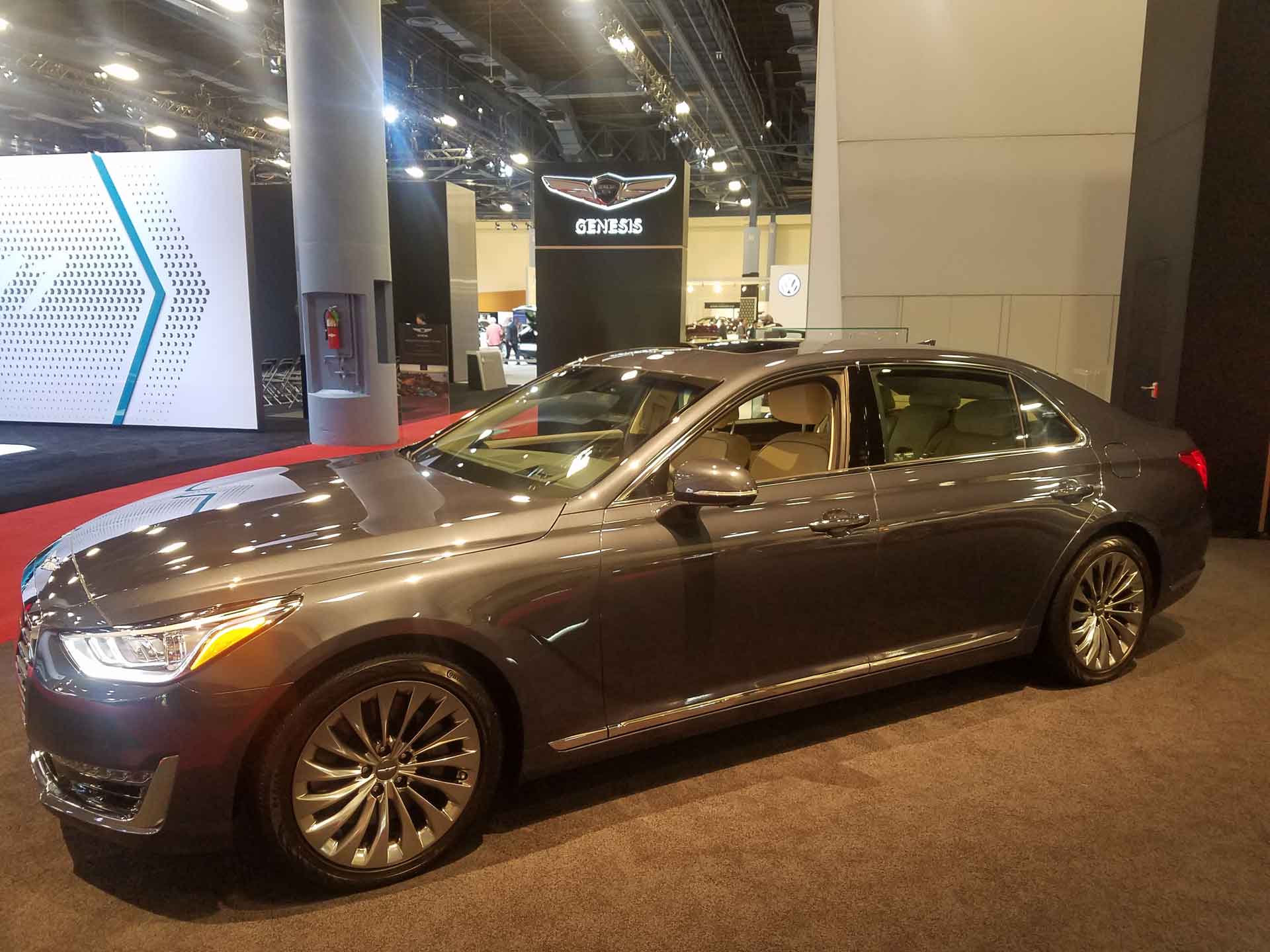 2) No wonder the Genesis was awarded “Best Luxury Sedan” by Ruedas ESPN this year. With its multi-link suspension system, Intelligent Drive Mode and Smart Cruise Control the Genesis G90 is creating a new standard by seamlessly integrating opulence, technology and comfort. Genesis stands out among its luxury competitors as the only company that will arrange a drop-off and pick-up of your G90 or G80 at home or the workplace while leaving a replacement until service is complete. Human-centered luxury…what a concept! 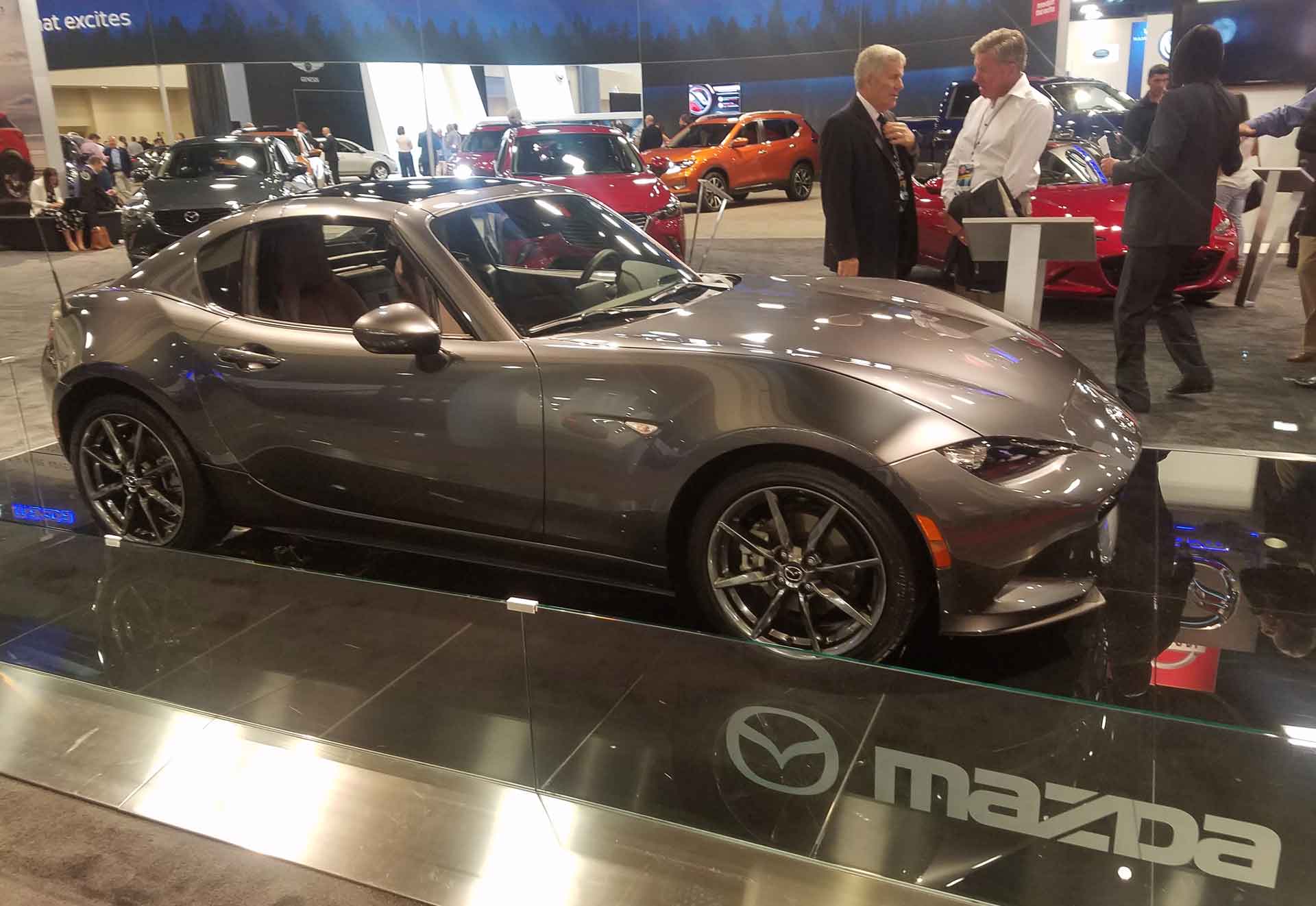 3) The 2017 Mazda Miata MX-5 Launch Edition makes the list because the only thing better than a convertible is one with a retractable hardtop that closes in twelve seconds and doesn’t impede trunk space. Its SKYACTIV G 2.0L DOHC engine can be paired with either a 6-speed manual or automatic transmission. The limited edition Machine Gray Metallic exterior with its delicious Auburn Nappa leather interior certainly whets the appetite. 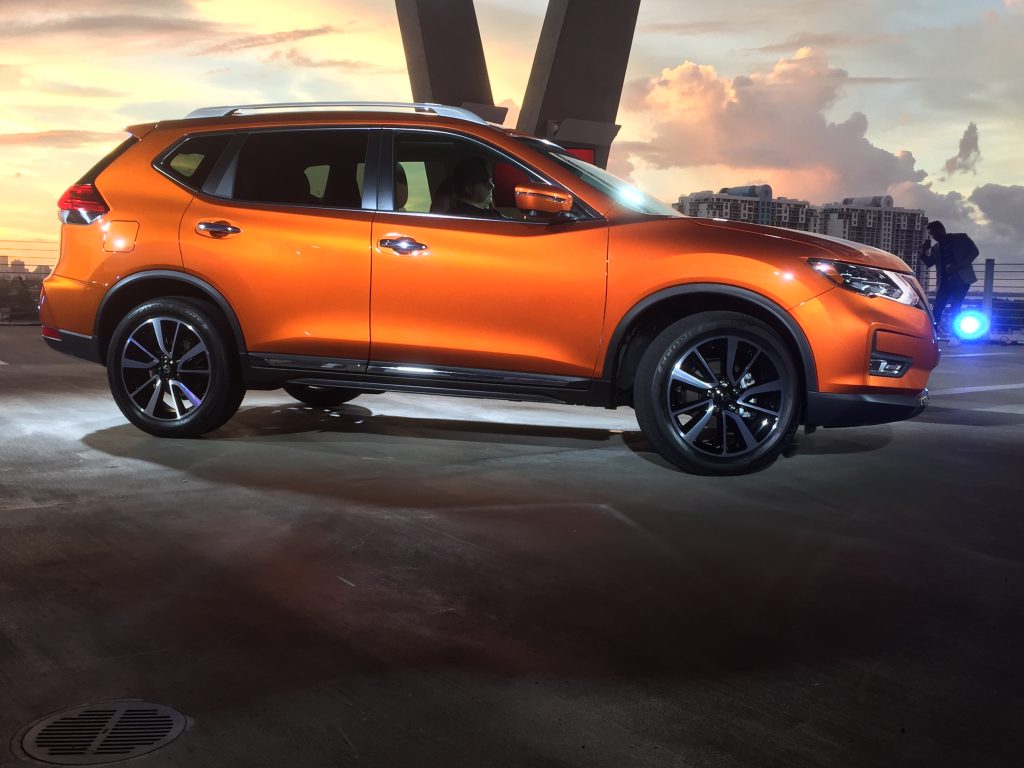 4) Jose Munoz, chairman, Nissan North America, Inc., spoke passionately about the importance of the 2017 Nissan Rogue to the company and its bevy of newfangled enhancements including the Hybrid model with an expected economy of 35 highway mpg for FWD Rogues. The new Rogue Hybrid features a 4-cylinder engine, compact Lithium-ion battery and electric motor to get the vehicle moving eco-friendly from the one-motor and two-clutch package dubbed Intelligent Dual Clutch system. With the ability to hold seven passengers with the optional 3rd row increased cargo and seating configurability are presented by way of 18 adjustments with Nissan’s EZ Flex Seating System and Divide-N-Hide Cargo System. 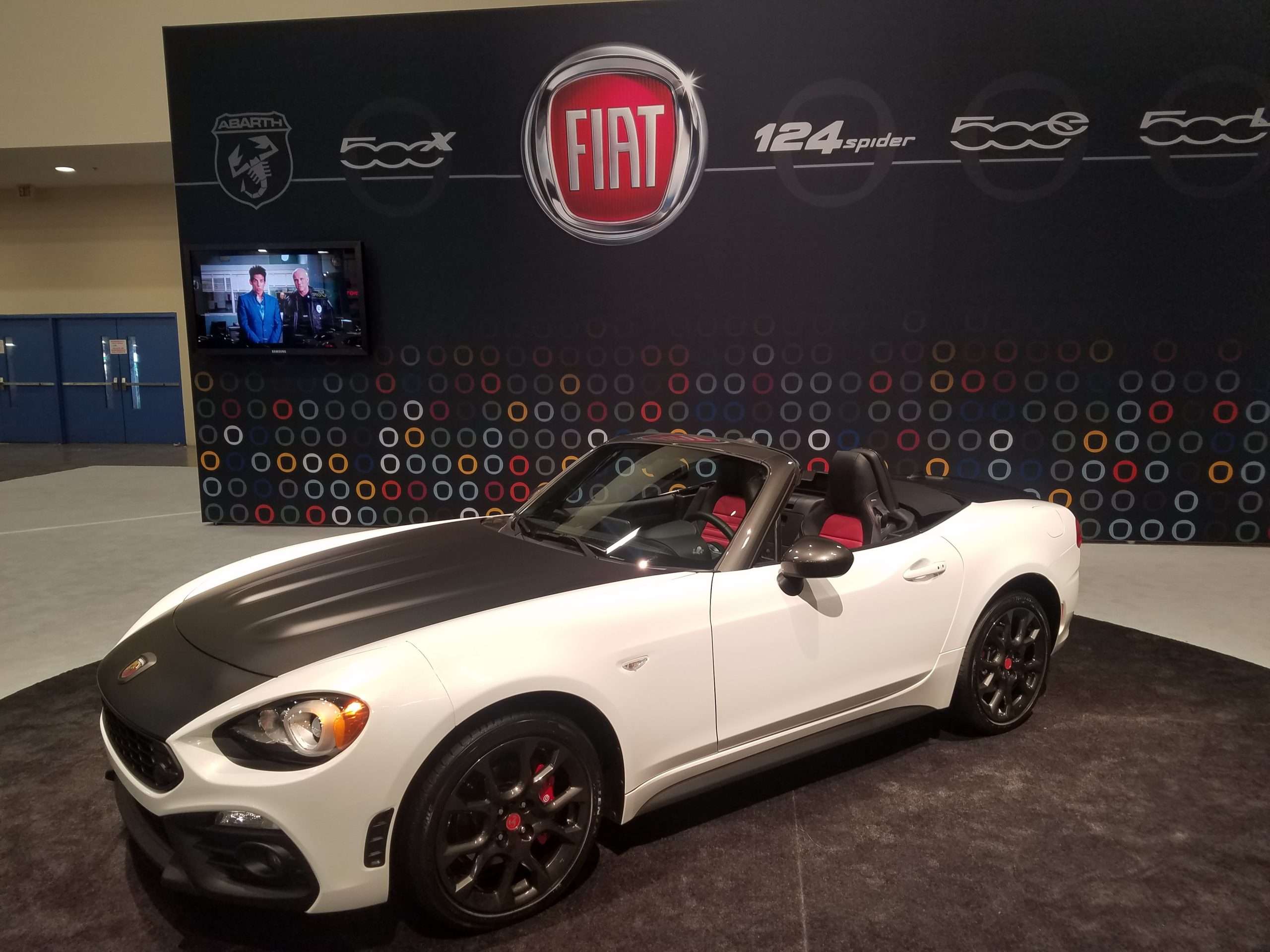 5) This year marks the 50th anniversary of the 124 Spider and what better way to continue the celebration than with the introduction of the 2017 124 Spider Abarth. The sport-tuned suspension, performance brakes, performance bucket seats and racing stripe options put this sports car in the winner’s circle straight out the gate. The ergonomic Fiat Connect 7.0 and Bose Premium Sound System option are music to the ears while gallivanting up the PCH top-down. Starting at $29,000 this fast and furious Fiat is a perfect addition to the family.