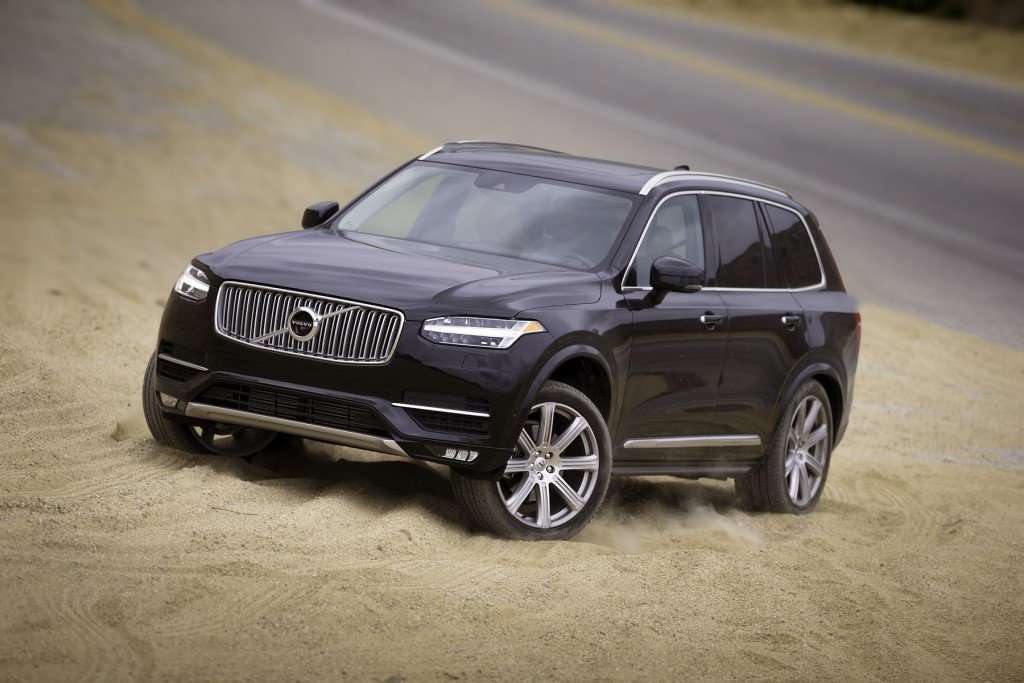 My close friends, family and business associates understand my deep and profound love for reggae legend Robert Nesta Marley. The melodious rhythms and positive vibrations of his tunes ignite passion in my soul incessantly. So the first task upon entering the ambitious and opulent cabin of the 2016 Volvo XC90 was to connect my iPhone to the iPad-resembling Sensus infotainment center, select the Marley playlist and let the music reverberate through the amplified Bowers & Wilkins (B&W) audio system. From Jamming to No Woman, No Cry I cruised through Santa Monica, California feeling inspirational. Yet, both the mode of transport along with the audio of choice played a key factor in my upbeat mood. Possibly, could Volvo have unknowingly channeled the King of Reggae to become the Top Rankin’ 7-passenger luxury SUV on the American market? Yes, possibly. 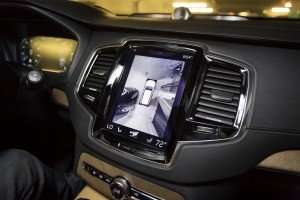 More than five years ago when my wife and I were researching a luxury sport-utility vehicle the XC90 came to mind alongside the Audi Q7, Mercedes-Benz ML, Acura MDX and BMW X5. All presented great cases for themselves except the XC90 which would become our last option after multiple test drives. The interior was the most mundane out of the bunch so we scratched it off the list and ultimately decided on the three-row Q7 TDI. No other brand had been able to meet the expectations required to dethrone the German until I was able to officially evaluate the all-new XC90 T6 and T8 Plug-in Hybrid. Scandinavian design and engineering has just Satisfied My Soul (no pun intended).

Day one at the beach called for a short test drive up and down the Pacific Coast Highway (PCH) in the XC90 T8 Plug-In hybrid. Describing the cabin as impressive is an understatement. Its aforementioned infotainment intelligence is on par with Apple iOS 8, the handmade crystal gear shifter is magical and the layout is clean, but technologically laden with multiple layers such as fine woods and soft Nappa leathers. The B&W tweeters are integrated within the door’s brush metal panels. A double-paned panoramic roof widens the cabin with light and the defined side view mirrors are as vivid as HD TVs. Another thoughtful touch is the frameless rearview mirror. A front-mounted, supercharged and turbocharged inline 4-cylinder is paired with a rear-mounted 65kW electric motor to produce a stealthy 400 combined horsepower and 472 lb-ft of torque. The T8 operates as FWD first until AWD traction is needed. But, you can specifically select AWD on the Drive Mode scroller for full-time traction. The other modes include Save, Pure, Hybrid and Drive-E. The hybrid system is paired with a pretty smooth 8-speed automatic transmission. Expect various Lithium-ion battery charge times of 2.5 hours to 6 hours depending on power source. On sale at the end of the year, prepare to pay roughly $68,000 for the T8 Plug-In hybrid.

The context of the XC90 story is simple; Volvo started on a clean sheet of paper and was able to revolutionize everything about the vehicle which debuted in 2002. Although my wife and I were picky with our SUV taste, 600,000 global owners were just as specific with their choices and made the XC90 a very popular vehicle to own. Since 1927 Volvo has established its prime manufacturing strategies on safety. With this element on lockdown, company executives could focus on other stratagems from design to performance and allow their owners to feel inspired. So far they have registered 30,000 sold units and 1,927 1st Edition vehicles that aptly represent Volvo’s founding year.

Never before could I have imagined a Volvo with opulent and tech savvy interiors on par with the British and German automakers. But in fact, the new XC90’s cockpit is a Scandinavian sanctuary which starts off with the premium seats with ventilation, lumbar support and leg extenders. Volvo spent seven years developing the legendary, comfort and technological seats and ascertained that neither of the three rows were afterthoughts. For example, designers trimmed the fat and decreased the size of each front chair which added more second row legroom. Stadium seating was introduced for optimal views and the 3rd row seats are also centered so passengers are not looking at 2nd row headrests. Moreover, each of the two 3rd row seats can be laid down individually by way of manual operation. Plus, all the three 2nd row seats individually lay flat. The optional 2nd Row Center Booster can be had for $250. Let’s go a step further. The Swedish SUV’s advanced safety technology features collapsible technology that help protect the spinal cord in injuries during collisions that involve the wheels leaving the ground.

Day two at the beach offered extended time in the 2016 XC90 T6 AWD which is powered by Volvo’s inventive supercharged and turbocharged 2-liter inline 4-cylinder engine. It presents greater fuel efficiency, reduced weight and size, increased flexibility and a wide span of power. Both the T6 and T8 can tow up to 5,000 pounds, but I do prefer the supplementary strength of the T8 Plug-In. The T6 offers 316-horsepower and 295 lb-ft of torque and is also paired with an 8-speed Geartronic Automatic transmission. Together the powertrain averages 22 combined MPG. Volvo tenders the XC90 in three distinctive trims for both the T6 and T8: the volume selling T6 Momentum at $48,900, the T6 R-Design at $52,900 and the $54,500 T6 Inscription which I spent all of my dive time in. The T8 lines increase the cost to entry considerably: T8 Momentum at $68,100, the T8 R-Design at $70,000 and the T8 Inscription at $71,600. My vehicle was loaded with accessories comprising the 21” rims ($750), 4-Corner Air Suspension ($1,800) and the 19-speaker B&W Premium Sound ($2,500). 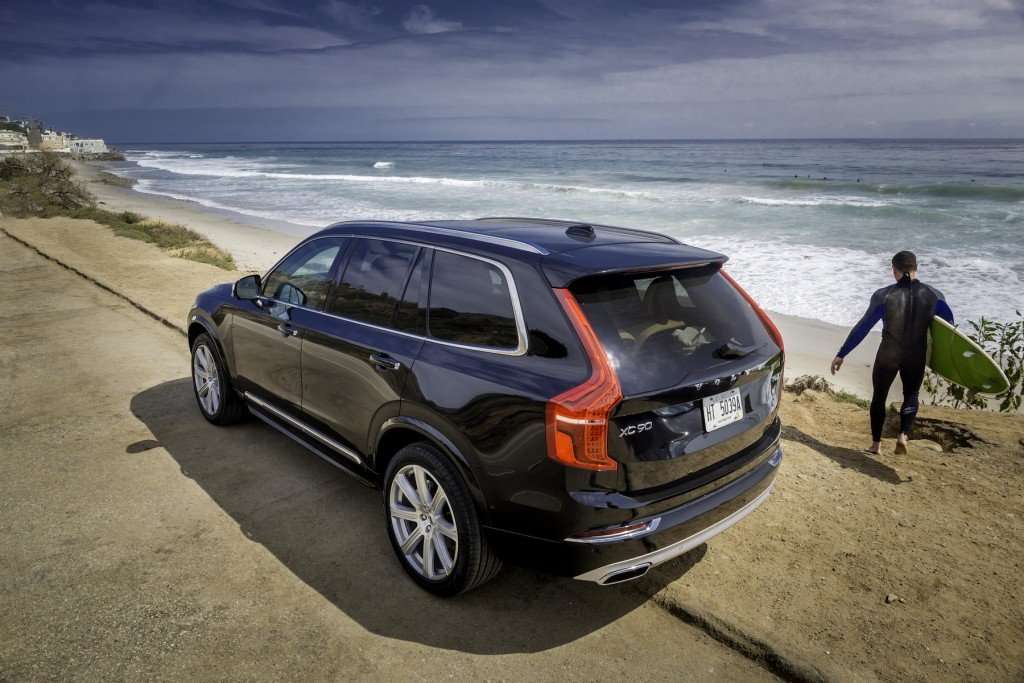 The T6 is respectful and drives with grace and a peaceful bliss. I don’t just feel safe in a Volvo, but now I feel important. Since Volvo decided to go full digital your XC90 also doubles as a mobile office and entertainment center. A 12.3” Digital Instrument Display (DID) over the steering wheel, Head-up Display (part of the $1,950 Climate Package), 9” touchscreen Sensus system and 360 Degree Surround View Camera and Adaptive Cruise Control with Pilot Assist for example puts me in the scene of a Tom Cruise movie. The screen takes time learning, but is meant as a secondary information station. Music and navigation can be adjusted through the steering wheel and monitored on the DID.

As stated, safety is key at Volvo. By 2020 the automaker envisions no deaths or serious injuries in their vehicles. Pretty lofty goal, but if anyone can pull it off Volvo can. But that’s just the tip of the iceberg. Other advanced safety technologies include Pedestrian & Cyclist Detection & Avoidance, Auto Brake at intersections, Rear Collision Warning (detects the possibility of a car about to rear end you), City Safety and Pilot Assist (possibility of stopping your car if the car in front of you stops). The Volvo XC90 is simply enchanting.

Cars are driven by people. The guiding principle behind everything we make at Volvo, there, is – and must remain – safety.” – Assar Gabrielsson & Gustaf Larson, 1927