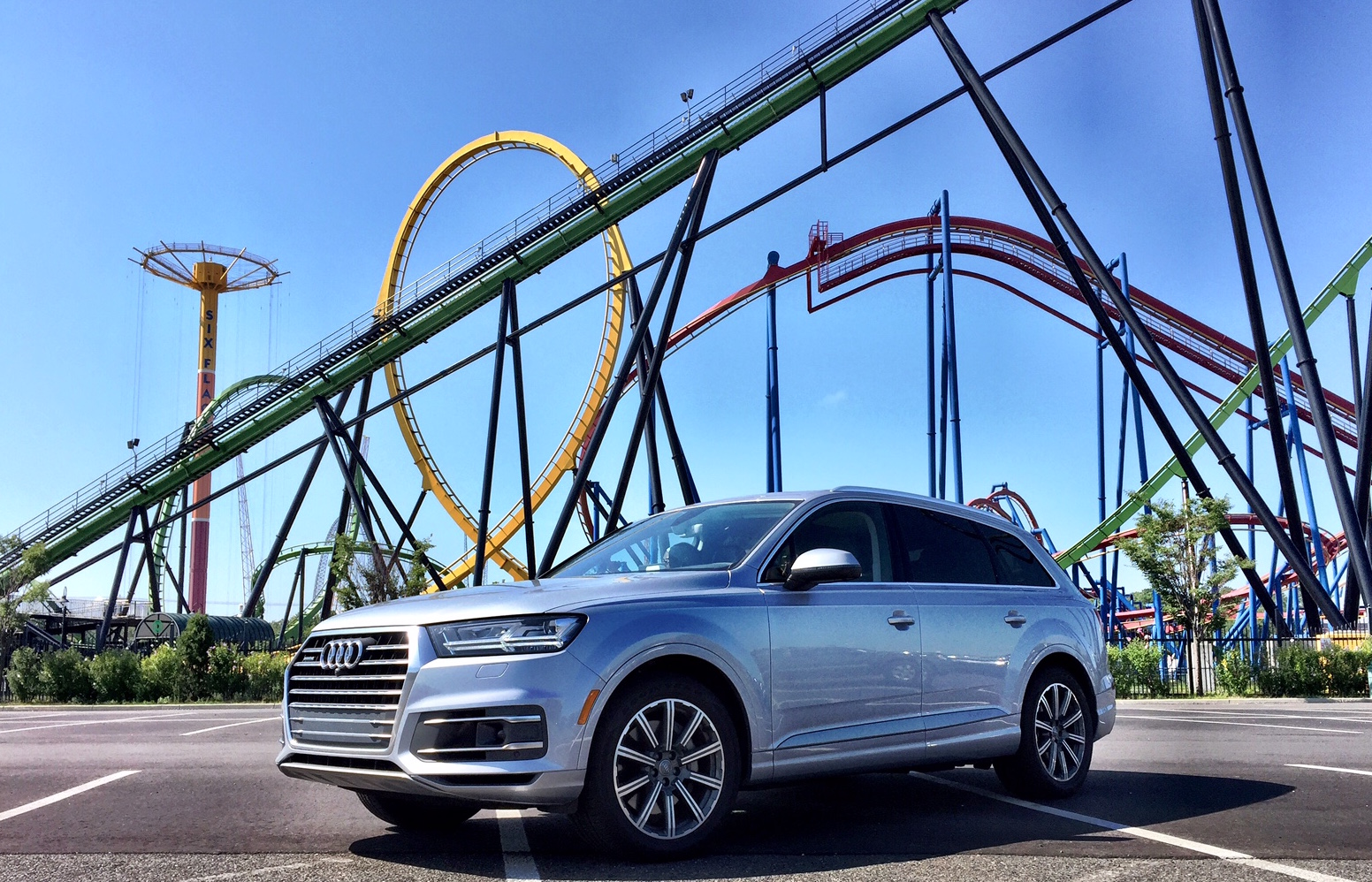 Audi is on a roll as they finally broke through 200,000 units last year and continue their streak of 67 consecutive months of records sales. In a segment that sees roughly 1.8 million premium vehicles sold annually, the German purveyor of finely engineered sports cars, sedans and SUVS is up in a market that is currently down, which says a lot for the brand and its hallmark products. One of the most important vehicles in the Audi fleet is the venerable Q7 utility that has undergone a complete 2nd generation makeover from design to interior accouterments.

During the week and weekend of my daughter’s 13th birthday I scheduled a Florett Silver Metallic Q7 3.0T quattro tiptronic for the drive from Silver Spring, MD to Jackson, NJ so we could all enjoy Mika’s favorite theme park and end the magnetic summer in energetic fashion. The anticipation of Six Flags Great Adventure built up over a few weeks since the Rawlins Family treats road trips like first class Hawaii excursions. My wife Misa was especially ecstatic as she currently owns a 2012 Audi Q7 TDI and is thinking about upgrading to a fresher ride with the latest safety engineering and advanced driver technologies. The new Volvo XC90 is also in contention.

Sine we were bringing along my two daughter’s cousins, the vehicle’s three rows and seating for seven was essential. The third row now has power controls from both the rear of the SUV and a secondary set to the side of the second row seating for added convenience. The second row also slides and tilts for passengers that need enhanced comfort. But the most defining feature may be the three-zone automatic climate control with a cadre of vents that extend across the entire dashboard. This was essential because our journey would come during the region’s hottest few days of the summer. With sweltering temperatures reaching a 100-degree heat index, the Q7’s A/C had its hands full but kept us all cool as penguins throughout the 4-hour drive. 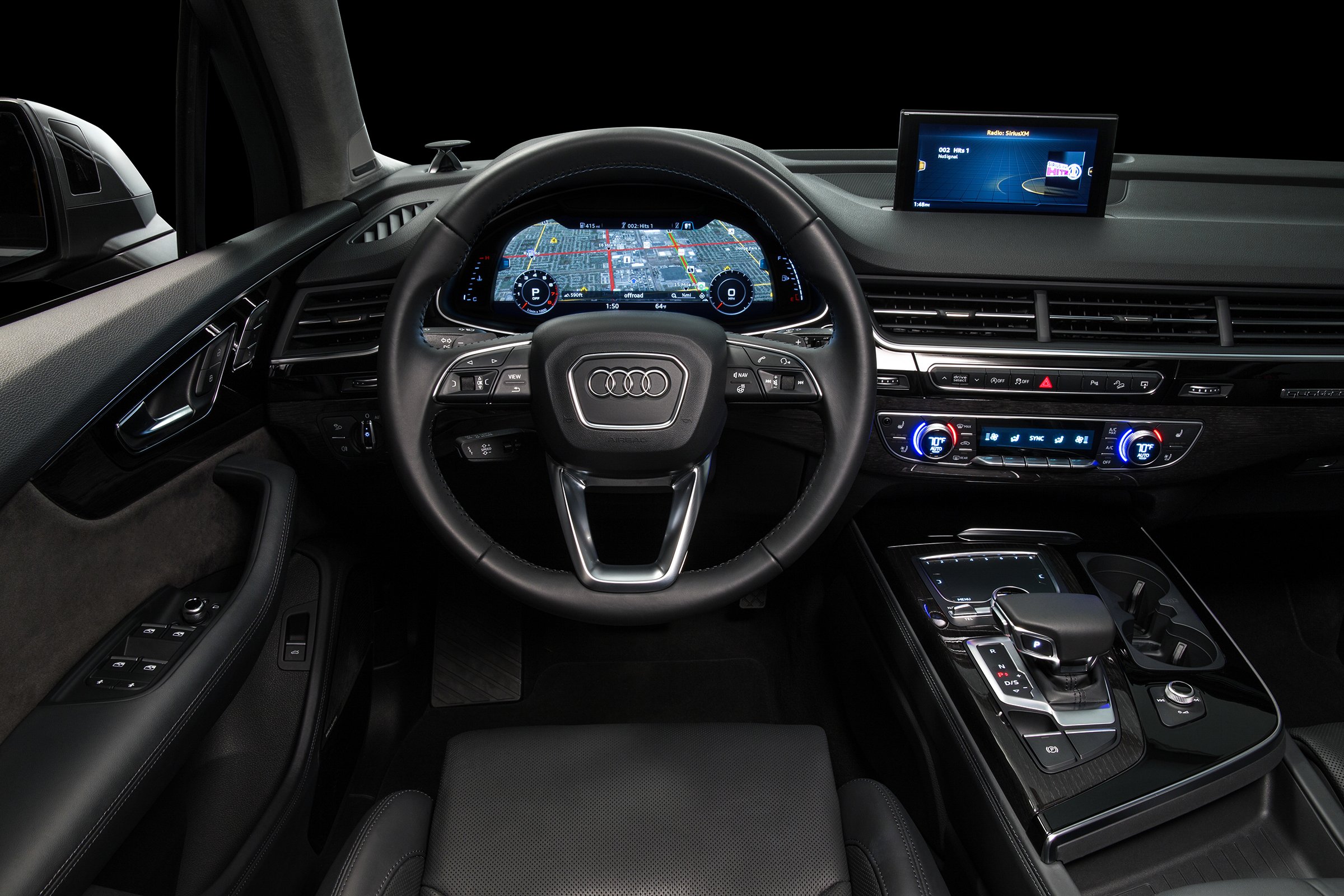 Starting at $54,800 our Q7 was enhanced with an array of add-ons that tallied to $68,925. Notable upgrades included the 20” 10-spoke star themed rims wrapped in Goodyear 285/45R20 all-season run-flat rubber, the BOSE 3D Surround Sound audio system, the towing package which was perfect for loading up our bikes on the Thule rack, Audi MMI Navigation plus with MMI touch, Audi smartphone interface, WiFi for the kid’s gadgets, Adaptive Cruise Control (ACC) and Audi Active Lane Assist (AALA). The Panoramic sunroof and sunshade are standard. I must say this new Audi has some of the most impeccable drive traits out of any SUV on the road today. The first Gen was a bit rugged so Audi made its replacement more refined and technologically focused. For example, the latest air suspension setup also provides rear wheel steering for precise cornering and maneuvering and ACC uses cameras to monitor speed limit signs. However, I am no fan of AALA. The proactive safety system kept adjusting and correcting my steering inputs, which became annoying.

Misa was in love with everything featured within the premium cabin as well as its power and mileage capabilities. Currently she has the TDI diesel and averages 580 miles per fill-up. Audi hasn’t released a TDI for the 2017 model yet but the 3-liter TFSI V6 with 333-horsepower and 325 lb-ft of torque is superb and the 8-speed Tiptronic transmission is fluid. We were highly impressed with its acceleration when the vehicle was weighted down with passengers and luggage. 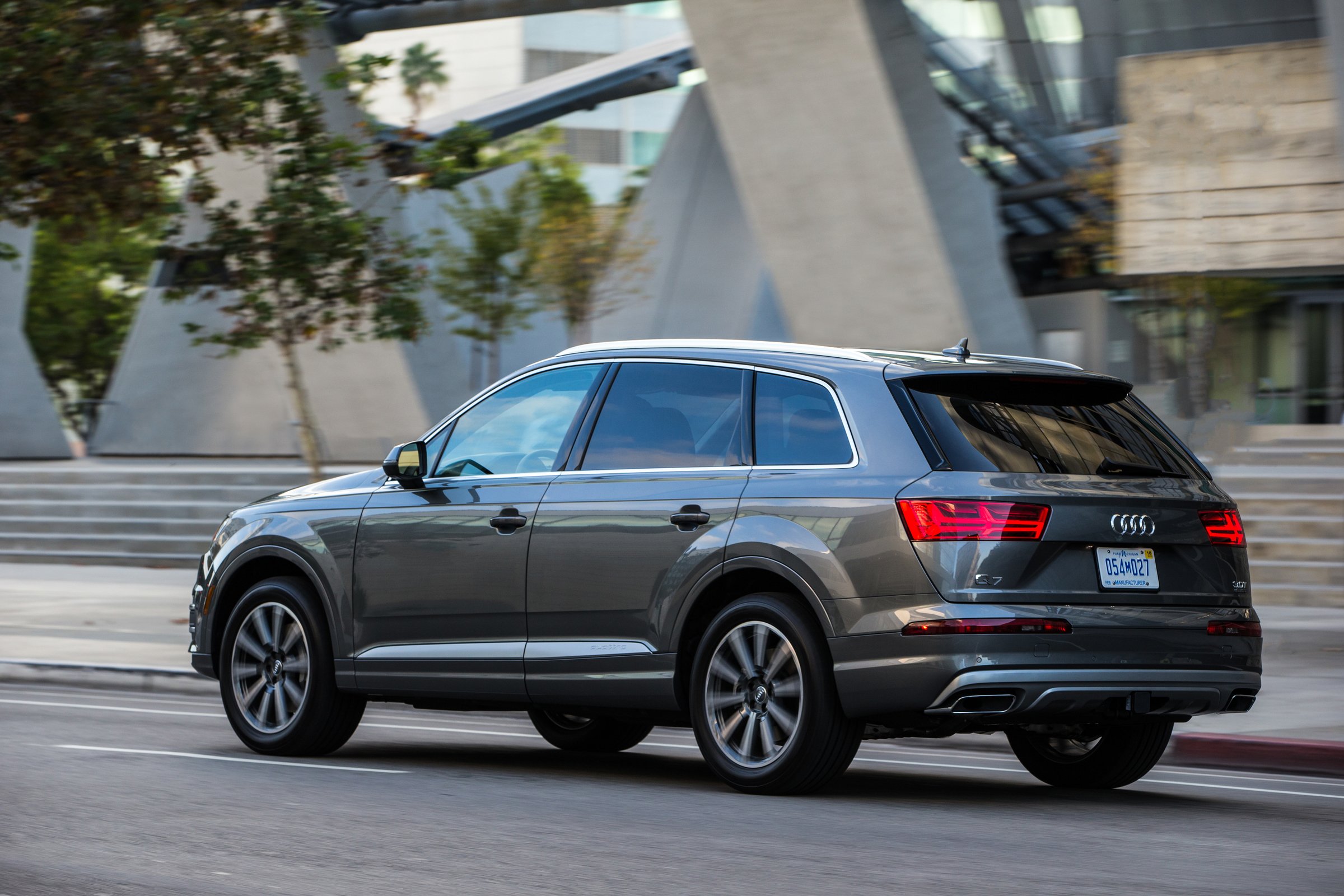 Visually, the new Q7 is the complete opposite of its predecessor. Gone is the rounded, bubbly design that gave the German SUV its pizzazz and definition. What you now get is the typical, angular motif that so many automakers roll with. Suffice it to say Misa wished Audi could have kept the original styling to go along with the elevated technologies which she is in enthralled by. I concur. On the return trip we kept eyeing 1st generation Q7s with allure but when we saw the new Q7 it did nothing to excite the senses. Even with the prominent, mammoth Audi grille, Alu-optic roof rails, tailgate spoiler, integrated dual exhausts tips and ability to outfit your ride with 21s, the Q7 still falls short of aesthetic authenticity.

But once you step back inside the opulent cabin and take the multifunction wheel you forget all about what’s outside and immediately focus on what’s inside. Conveniences include large door cup-holders, Apple CarPlay, soft touch ringed lights that illuminate with a slight swipe, key slot holder, the 8.3” TFT center display that retracts from the dash when the vehicle is ignited and the Audi Virtual Cockpit presented from the 12.3” TFT screen behind the steering wheel. The driver can select which view to take precedent such as full navigation. 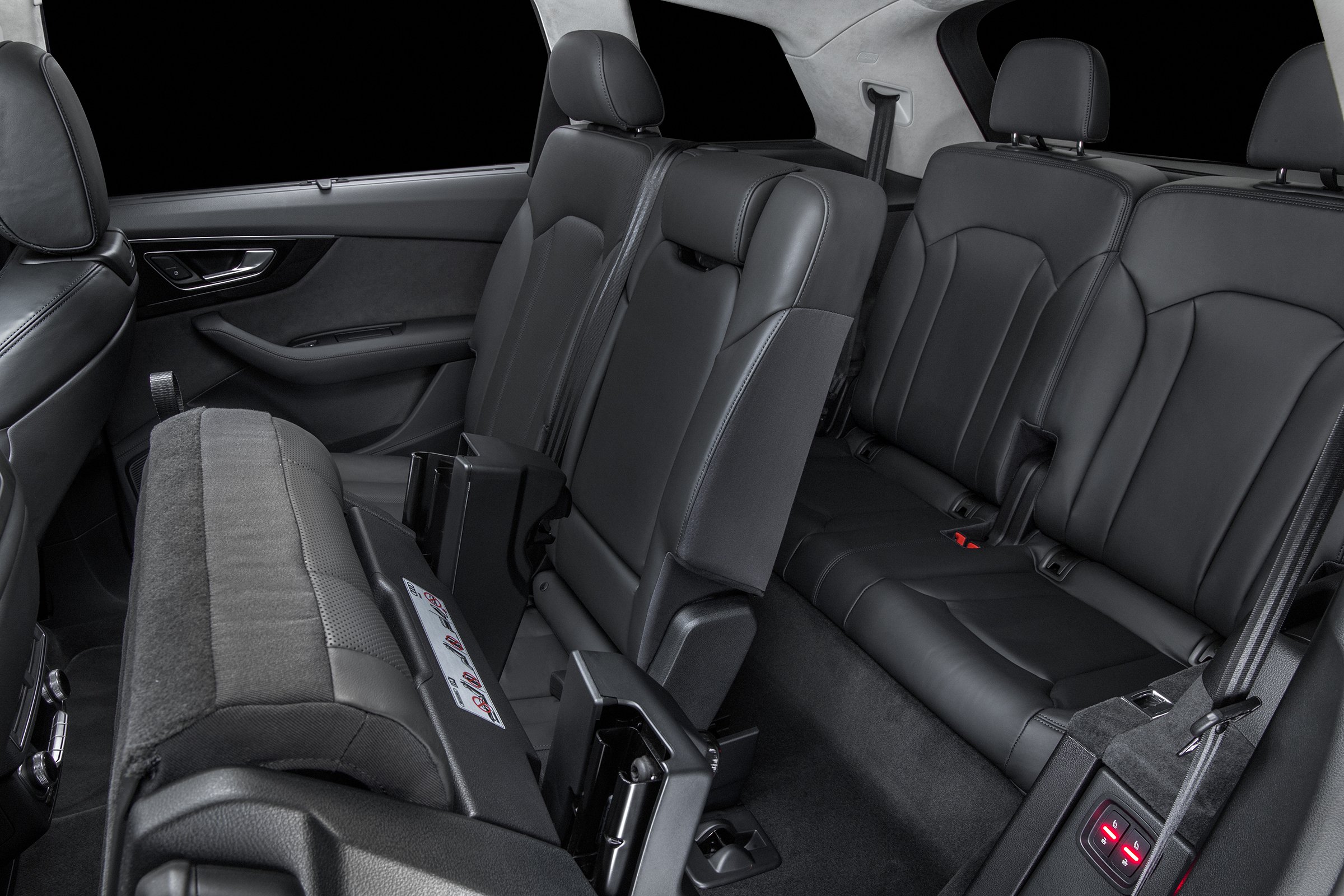 Overall the new Audi Q7 impressed when it was time to perform and the kids were satisfied which is essential during long drives. I can’t recall the last time either my wife or I called shotgun to drive home. That’s how great of a ride it is. The 2017 Q7 should definitely top your list of luxury SUVs alongside the BMW X5, Volvo XC90, Acura MDX and Mercedes-Benz GLS. 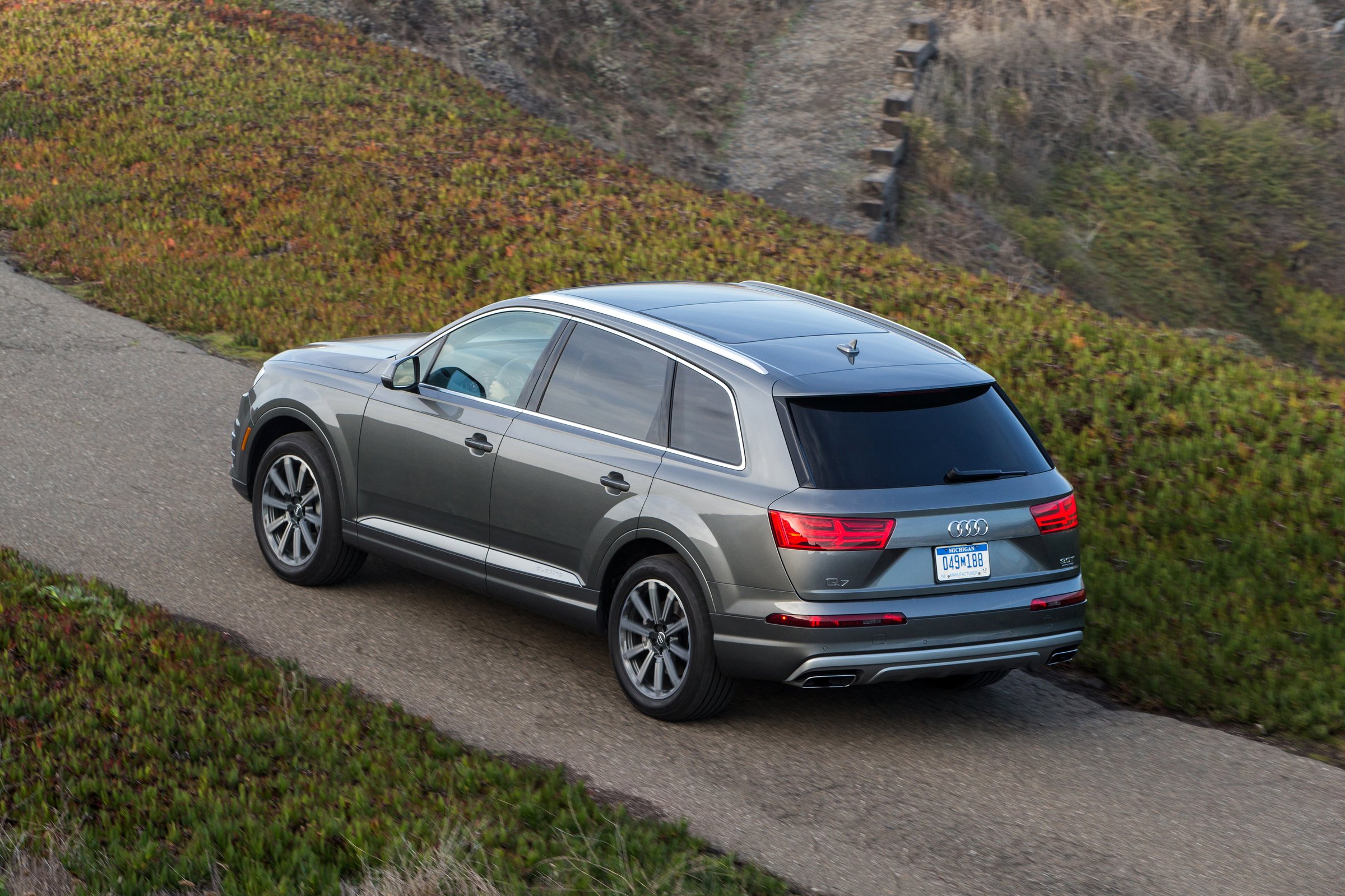