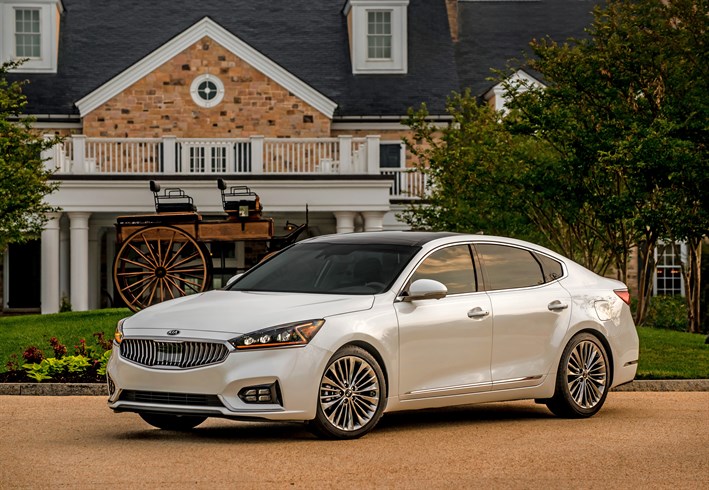 It’s absolutely remarkable how the Korean automaker Kia rebranded its image from the early days of 1994 when the Sportage first hit the scene. Known for cheap, value cars that did nothing to enlighten the soul or energize the consumer base, company officials knew they had to continue innovating products, focus steadily on quality and continuously identify opportunities for growth and fresh market segments. Today we see that in the form of the hip Soul, the high-flying Optima, the luxurious K900 and now the 2nd generation 2017 Kia Cadenza sedan.

Kia is currently as relevant as any other tier 1, pop culture brand. For example, a few weeks ago at Six Flags Great Adventure in New Jersey the Kia brand was omnipresent throughout the amusement park from the theme rides to actual vehicle displays for attendees to scope out. More importantly, since 2008 they have solidified positioning as the official auto NBA partner which is absolutely amazing. Better news came in 2016 as they were designated as the highest ranking nameplate among all auto brands in the J.D. Power 2016 U.S. Initial Quality Study (IQS). In 2015 they claimed the second overall ranking, so of course the evolution of Kia has been concentrated on satisfying customers with top, eminent engineering. Poignantly, this is the first time a non-luxury automaker has lead IQS.

This brings us to the second iteration of the Cadenza which bridges the gap between the Optima and the K900 and presents another fantastic opportunity to progress the design language. This is a language focused on dynamic designs, compelling interiors and the company’s authentic “tiger nosed” grilles. The resources are there since Kia opened a dedicated US design studio in 2007, a $1.1 billion plant in Georgia — that also created 15,000 jobs — and now another $1 billion plant in Mexico for additional growth opportunities. Since its introduction a few years ago in 2013 Kia has sold over 28,000 Cadenzas and plans to increase those sales numbers dramatically with the 2017 model. Especially being that 61% of Kia owners stay loyal and shop within the family when it’s time to upgrade.

“The new Cadenza adds an extra dose of excitement to the large-car segment with its striking looks and premium refinements,” said Orth Hedrick, vice president of product planning, Kia Motors America. “The Cadenza’s cabin has been improved in early every way, but it’s underneath where the Cadenza truly shines with a stiffer and lighter chassis, eight-speed transmission and vastly improved driving dynamics.” 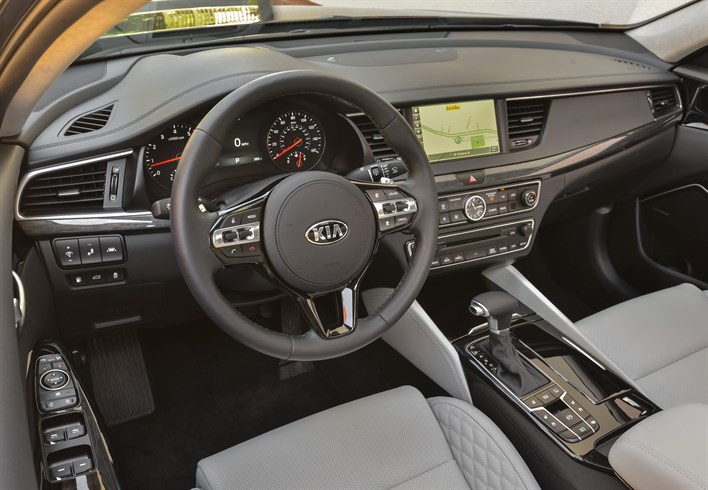 To experience the updated vehicle we were invited to Middleburg, VA for the national press launch where the historic Virginian roads were aptly suited for the updated engineering of the vehicle’s platform and architecture. It is the same length as its predecessor but sits lower and wider and has increased passenger legroom due to a slightly stretched wheelbase. With the Cadenza, Kia centralized their attention on identifying a clean cut, athletic and masculine, but elegant aura and physique. Actually they dubbed it a “tailored athlete” but I wouldn’t’ take it that far unless said athlete is a distance runner or swimmer; certainly not an Ashton Eaton, Conor McGregor or Julio Jones.

As with the progression of most autos from their prior form the Cadenza is lighter, stronger, more rigid by 35% due to increased advanced high-strength steel and features of course an optimized performing 3.3-liter Direct Injected V6 engine with 290-horsepower and 253 lb.-ft. of torque. Along with an 8-speed automatic transmission that helps it achieve 20 city and 28 highway mpg, the front-wheel drive (no plans for AWD) Cadenza felt fluid on the roads. A full underbody pan has been inserted to prevent noise intrusion and improve the drag coefficient and air curtains aid the sedan aerodynamically through the wind. One of the pivotal strategies for Kia was to ascertain the Cadenza replicated the solid, firm feel you receive in luxury vehicles. It’s getting there but isn’t quite there yet. For starters the multifunction steering wheel felt too light and is a bit thin in comparison to the driving characteristics and amenities emboldened in premium nameplates. Though, the Cadenza’s dexterousness around bends, acceleration on ramps and pinpoint braking were highly noticeable. Drive Mode Select allowed me to set the Cadenza in Normal, Eco or Sport modes for customized driving and the steering wheel paddles let me take control of shift patterns. 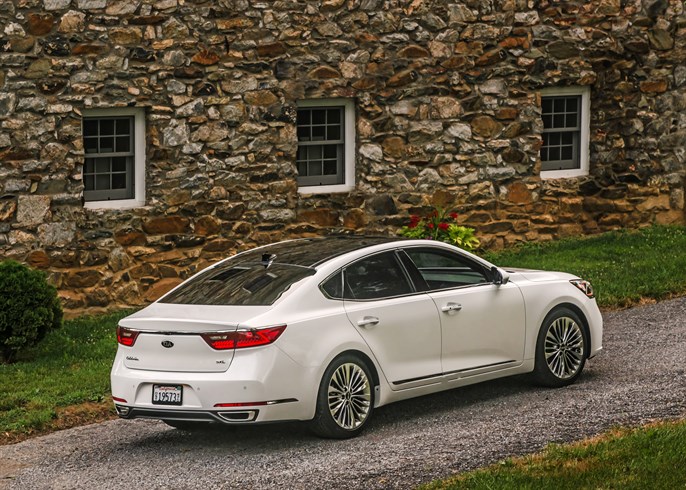 Offered as Premium, Technology and Limited models, the Cadenza will go on sale the end of October or the beginning of November. Two sets of wheels come in the form of 18” alloys or the 19” alloy wheels tucked in 245/40R19 Michelin rubber that my vehicle was outfitted with. Inside, the cozy cabin was laced with contrasting leather and diamond stich patterns, extendable front seat cushions, temperature regulated seat warmers, 1-touch opening/closing sunroof screen and glass panel and sunscreens for the rear three windows. In fact, not only is the Cadenza ultra comfortable, it is smart as well. It features wireless smartphone charging, Head-up display, Apple CarPlay, Android Auto, the enhanced 3rd generation UVO telematics operating through the 8” touchscreen and the rocking harman/kardon 14-speaker premium audio system with Quantum Logic Surround and Clari-Fi. Even the trunk with deep storage space is smart. When the vehicle detects the key as you are approaching the rear it automatically opens the trunk lid.

As you can see, Kia’s athlete in training brings good looks, admirable performance and elevated technologies to the forefront. While passing through a congested road I heard and then saw a congenial construction worker shout, “that’s a Kia, look at that!” I wonder if he’s family to the iconic brand because that’s the type of excitement they drum up. Pricing will be released at a later date but should be comparable to the 2016 Cadenza’s $32,990 MSRP.