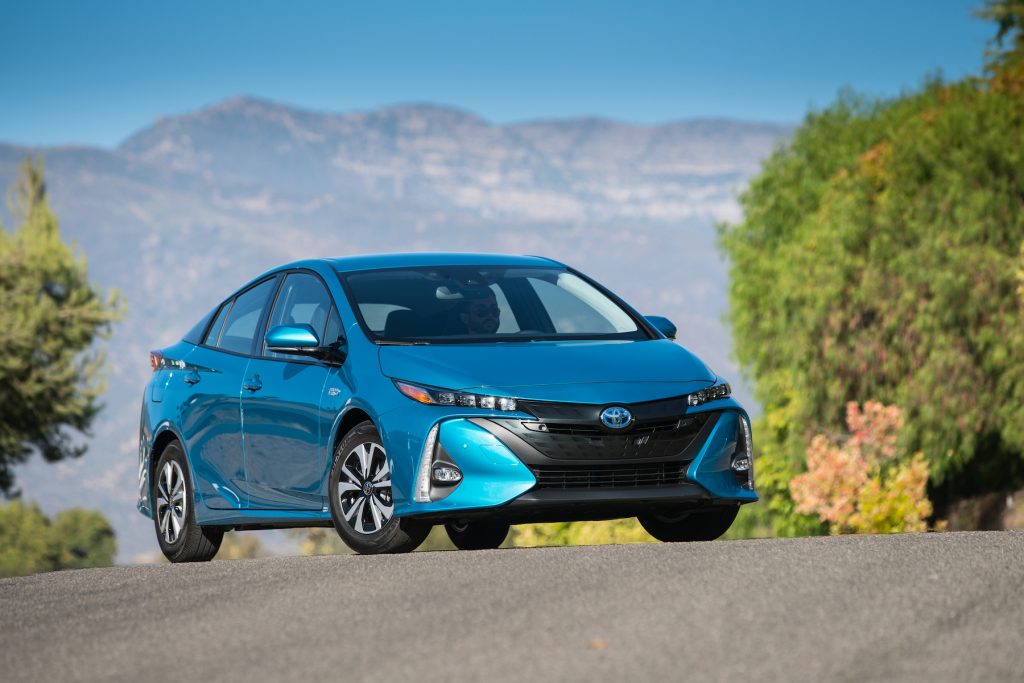 If you don’t believe in Global Warning and the erratic climate changes it produces then you must be living on Mars. I took note yet again when my leaves began falling in early August which was quite frightening. Who would have thought I’d be raking in the summer? Yes, the auto industry and every other major production sector that utilizes Earth’s great resources also contribute to this degrading phenomenon in some fashion or form. So the goal is to become a minimalist and engineer products that are healthier for the planet such as green vehicles whether they are hybrid, electric or hydrogen.

With an official EPA estimate of 133 MPGe the new 2017 Toyota Prius Prime set the bar high for competitors to step up their e-mobility game. During a media event in Ojai, CA I was able to experience the front-wheel drive Prius family which includes the Prime Plus, Prime Premium and Prime Advanced. Its powerful name alone — Prime — is enough to attract attention. Maybe it’s my love for the Transformers and their fearless leader Optimus Prime who could probably use an EV upgrade. Prime represents the best of what Toyota has to offer green and is their most efficient hybrid powertrain. With 55 city mpg, 53 highway mpg and an estimated 640-mile range the latest Prius will far exceed your expectations. Also, the plug-in hybrid’s 25-mile electric range (up to 84 mph) is up from 22. This means you can make your daily, local runs without burning any fuel at all. Of course I would like to see this stretched out to at least 50 miles of electric range in the near future. 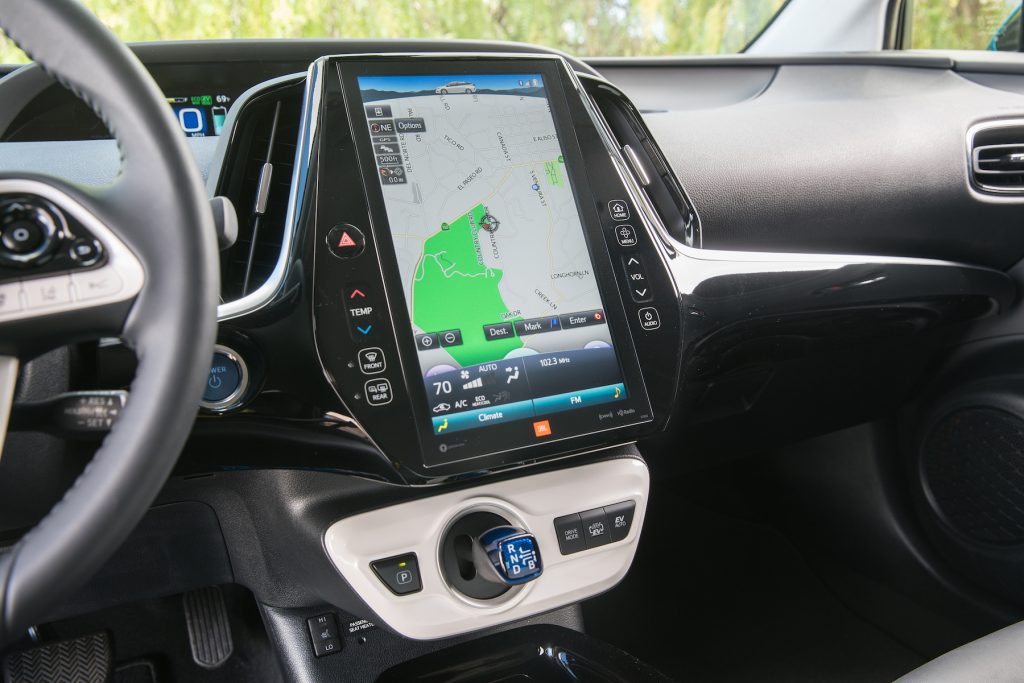 With a stable totaling 13 hybrid models between Toyota and Lexus, the Japanese auto manufacturer has a whopping 70% chunk of the industry segment. For almost two decades Toyota has been leading the charge and revolutionizing the hybrid market with the Prius brand. That’s pretty major and convincing for potential consumers looking to make the switch.

The poplar Prius looks and feels like something different and eco-conscious. For the 2017 model Toyota has lowered it by 1”, widened it by .6” and lengthened it by 4.2” over the Prius Plug-in while increasing torsional rigidity by 60% over the 2016 Prius Liftback. However, the Prime is heavier and drives less dynamic even though weight savings were achieved by reducing the size of the power control unit and optimizing the battery which can now be charged faster through regular home 120v outlets (less than 5.5 hours). With public level 2 charging or other 240v sources your Prime will be fully energized in about 2 hours. In addition, the Charge MGT System lets owners set specific charging times. 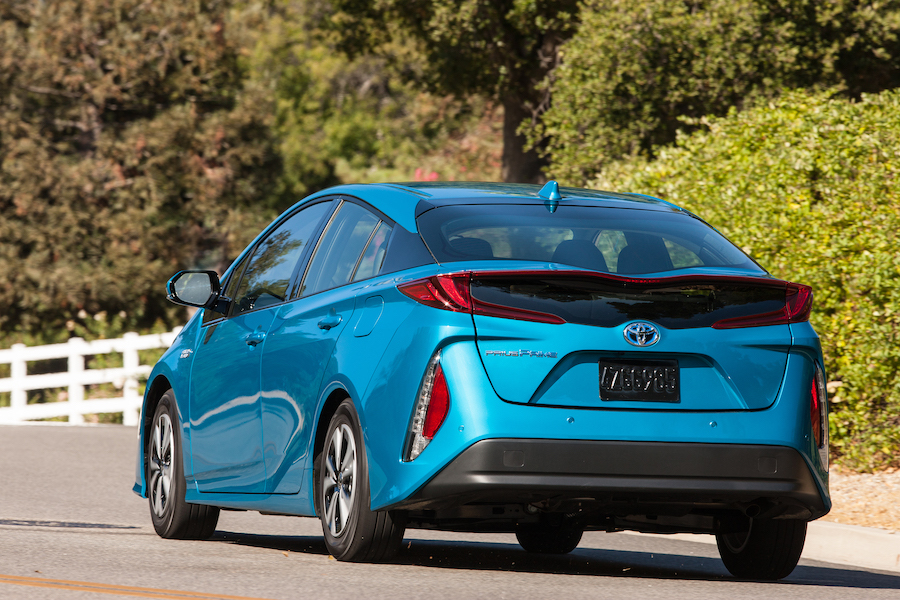 With some of the styling emulating the Toyota Mirai fuel cell vehicle, the LED headlamps specifically, the Prime is more aggressive than ever. Of course this Trekky design theme has alienated many but if I’m going “auto 2.0” I definitely want my ride to play and look the part. You get 15” wheels, patterned acrylic grille overlay, carbon-fiber-reinforced-polymer rear hatch, heated and folding mirrors, LED taillights and dual-wave rear glass to help reduce drag. Though, the rear window still obstructs the full view which forces you to utilize the integrated backup camera. 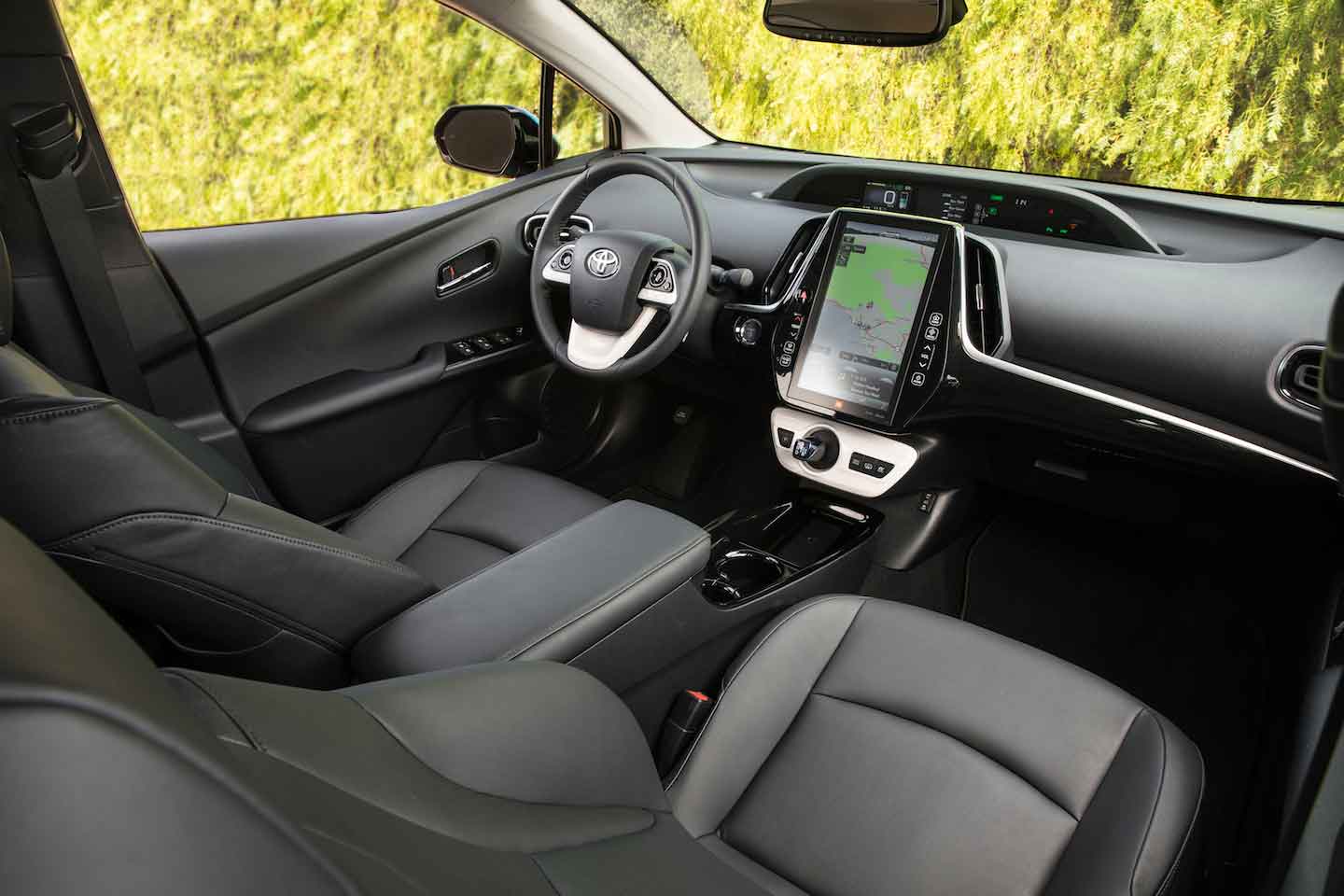 Inside, the Prius receives major updates starting with the sporty, redesigned and heated seats that are now lower to the floor. My Magnetic Gray Metallic Prime Advanced model had the 8-way power adjustable driver seat and Moonstone SofTex trim which also outlined the multifunction steering wheel. The base model features the Entune Premium audio with Integrated Navigation and App Suite with the 7” touch-screen, but both the Premium and Advanced follow the Testla route with the massive 11.6” iPad-like HD multimedia screen. It’s the largest display for Toyota and can be swiped and pinched and will always show the map on the top half of the screen no matter what menu you select. The Advanced receives the Entune Premium JBL Audio system with 10 GreenEdge speakers. I’m also fond of Qi-compatible wireless smartphone charging but unfortunately the iPhone 6 doesn’t support that technology.

Safety is a top priority with Toyota Safety Sense available in 18 Toyota models. It includes an array of safety systems from Lane Departure Alert with Steering Assist to Full-Speed Dynamic Radar Cruise Control. Then you receive the Star Safety System with Enhanced Vehicle Stability Control, Traction control and Smart Stop Technology to name a few.

With a variety of hues to decide from such as Blizzard Pearl, Magnetic Gray Metallic, Classic Silver Metallic, Hypersonic Red, Titanium Glow or Blue Magnetism, Prius Prime pricing is $27,100 for the Prime Plus, $28,800 for the Prime Premium and $33,100 for Prime Advanced. Your carbon impact on society will always be measured by the foods you consume to the clothes you wear to the cars you drive. It’s the reason why I’m a vegan and choose any assortment of EVs over tradition. Expect the plug-in hybrid to go on sale late 2016.