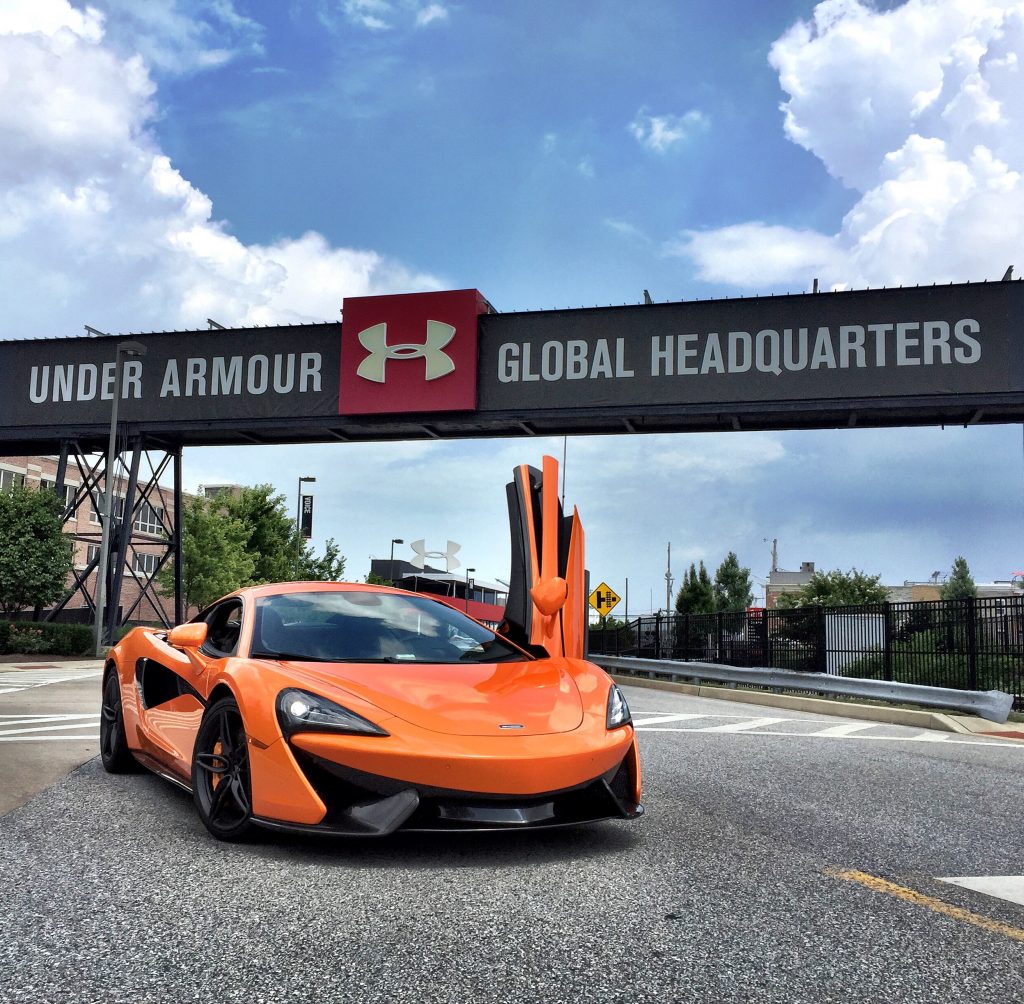 There are not many machines that can emulate euphoric hyper speeds aside from jets, sportbikes and supercars. With the ability to fly from 0 mph to 60 mph in 3.1 seconds or 0 mph to 124 mph in 9.5 seconds, the McLaren 570S is simply amazing. Loaned to Automotive Rhythms for a full five days for testing and showcasing at a few key events, our 2017 Ventura Orange McLaren 570S stole the hearts of fans, aficionados, professional athletes and of course my neighbors during the breathtaking timespan.

My introduction to the 570S, McLaren’s first Sports Series model, decidedly took place last summer while vacationing with family and friends in London. We were graciously invited to enjoy a factory tour of the state-of-the-art McLaren Production Center in Woking, England. Guided by none other than Amanda McLaren — the daughter of founder Bruce McLaren — the Earth friendly facilities and corresponding campus are astounding. The outside grounds for example are lush with two lakes, birds, foxes, rabbits and other natural elements. In fact, company officials planted 100,000 trees, shrubs and plants to ascertain the facility in totality would be as sustainable as possible. Witnessing the Sport Series come to life was a fulfilling gratification.

When the $221,850 ($184,900 MSRP) 570S arrived at Automotive Rhythms headquarters on a Thursday afternoon I let it sit for 24 hours to meditate on the vehicle’s defining sculpture, study its framework, admire the F1 themed componentry and artfully crafted carbon fiber enhancements and gaze at the light, aluminum upward-opening swan (dihedral) doors. I also needed time to respect the prodigious power from the British supercar’s rear, mid-mounted 3.8-liter twin-turbo V8 that emits 570-horsepower and 443 lb.-ft. of torque. 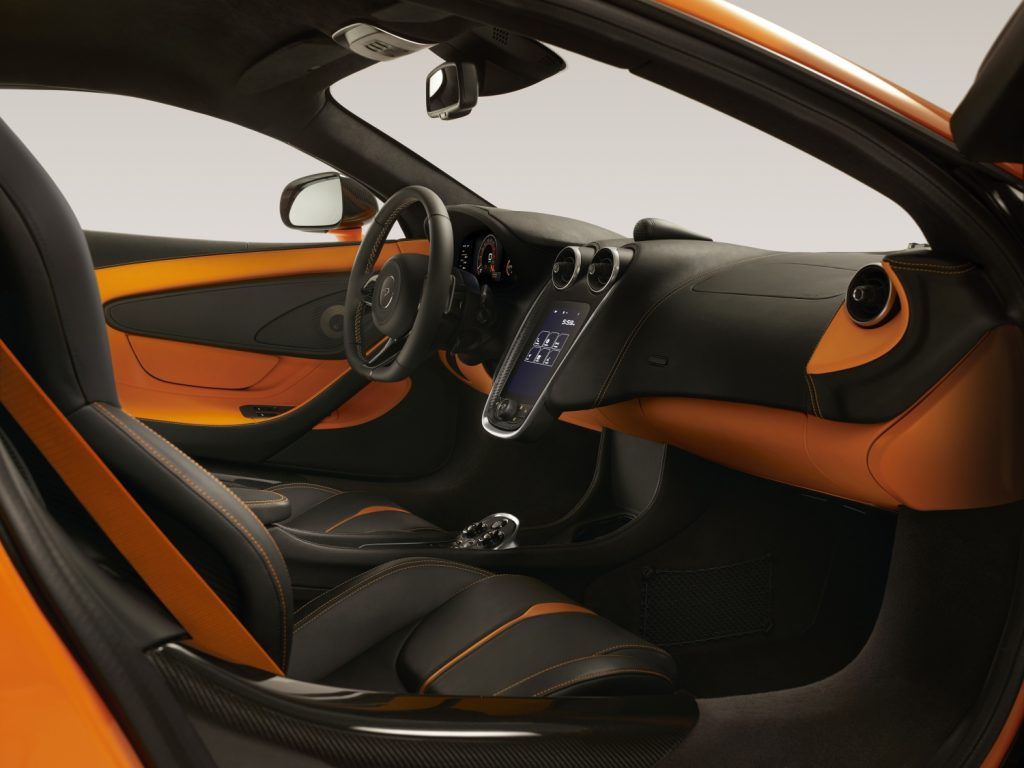 The next day I finally squatted low to enter the black/orange leather cockpit. Its 7-speed dual clutch Seamless Shift Gearbox (SSG) with three powertrain and transmission modes (Normal, Sport and Track) and large butterfly shifters created one of my most invigorating drive experiences to date. This is coming from a guy who has taken the wheel of Bugattis, Ferraris and Lamborghinis. The system also incorporates Winter, Normal, Sport and Track stability control modes. The  McLaren Adaptive Damping Suspension can also be set in Normal, Sport and Track mode. Another essential is Vehicle Lift, a mechanism to manually raise and lower the frontend for speed bumps or steep driveways. It will lower automatically when the vehicle hits 40 mph. Vehicle Lift was especially poignant in Georgetown where I faced an extremely high speed pump in a VIP cobblestone driveway.

Bred for the track, McLaren’s 50 years of Formula 1 expertise has spearheaded a campaign that comingles racing prowess with daily on-road mannerisms. Furthermore, they have instilled elevated automotive know-how into the high-performance sports car by way of technology partners such as AkzoNobel, ExxonMobil, Pirelli and SAP. Dubbed the most attainable McLaren road car project yet, the 570S is able to top out at a blistering 204 mph. Welcome to the Major League ladies and gentlemen!

“As we move forward as a business we take learnings from previous projects and current products, and now moving into the sports car sector, the program has become the most challenging to date as we push the bar of quality and performance even higher,” stated Andreas Bareis, Executive Director, McLaren Automotive. “The relentless drive for continuously improving quality within all business areas, with a focus on the pre-production phase, enables us to achieve a significant milestone which was set as a key target at the beginning of the program.” 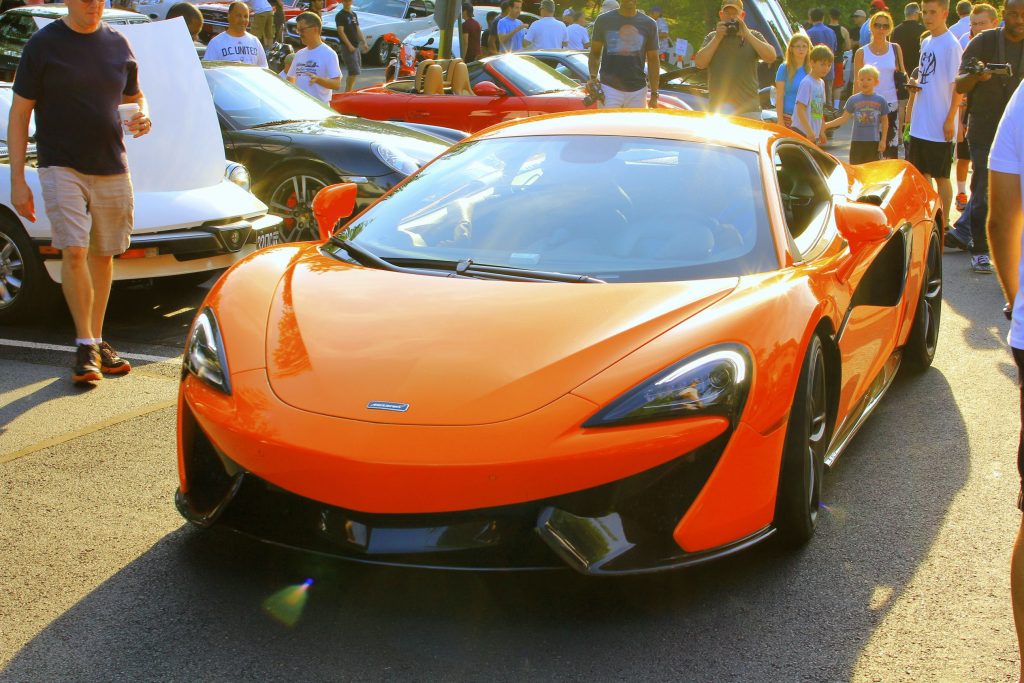 The power and finesse of this RWD British soldier makes it one of the most exciting rides on the road. A carbon fiber chassis reduces mass to 2,895 pounds while a 42/58 weight distribution sets the tone for ultimate performance. Acceleration is jointly ignited through staggered Pirelli P Zero Corsa tires (285/35 ZR 20 rear and 225/35 R19 front) which help the vehicle burn way to blitzing top speeds. In unison, gorgeous 5-spoke (spider) lightweight, forged alloy rims — which are paired with manhole-sized carbon ceramic rotors and McLaren Orange brake calipers (6-piston front, 4-piston rear) — and the summer tires grip asphalt like grapples to decelerate your starship. It’s as if the 570S sees a wall before halting abruptly on the drop of a dime.

Aesthetically the supercar put smiles of amazement on everyone’s faces. Whether parked or sailing by I felt like I made their day. Captivation begins with the carbon fiber rear diffuser  and integrated spoiler that provide performance stability, carbon fiber splitter and carbon fiber side skirts which integrate with the articulate doors designed to channel airflow into the large air intakes. The trunk is located under the front hood and provides enough space for a few bags. Two large exhaust tips sit atop the diffuser and reverberate the lion’s roar when acceleration is enacted. More importantly, the Ventura Orange hue was a magnet for attention from auto enthusiasts at Katie’s Cars and Coffee in Potomac, MD, to executives at Under Armour’s Performance Center in Baltimore, to NFL athletes including the Broncos’ Phil Taylor and the Ravens’ Kyle Arrington during a pit stop at their All-Pro Football Camp.

McLaren Orange originally became the brand’s choice during its heyday of racing when teams represented their nation through a specific color. Company officials aspired towards a hue that was bold and unique as well as one that was vibrational on the circuit and on home screens. Silver didn’t show up well on TV for example. I believe it’s the perfect tone for McLaren. 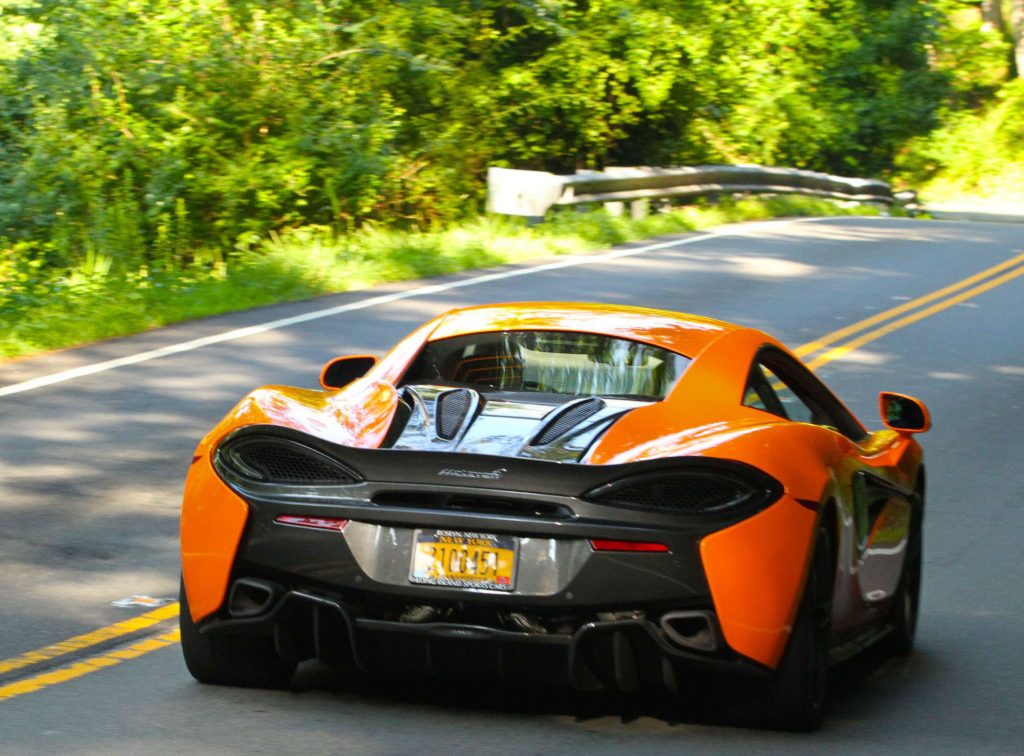 Recalling my factory visit shed light on why McLaren build processes are so precise and calculated. Amanda reiterated that each vehicle is produced and painted by hand and that there is no automation or conveyor belt involved here. The environment is quiet and focused with only one robot on deck to measure the exact points on each model. As well, vehicle parts are sourced from both the UK (50%) and Europe (50%).

Inside the cockpit the 650S is comfortable and convenient when it needs to be. The racing chairs are not too stiff, the cabin is not claustrophobic and the touchscreen tablet houses your infotainment, navigation, Bluetooth, HVAC and the rearview camera which reduces anxiety precipitously. A 12-speaker Bowers & Wilkins sound system replaces the exhaust notes when you are ready for melodious tunes. Cruise Control was very helpful since the McLaren’s computer indicates the speed limit of each particular road segment. More often than not the 570S would easily surpass my speed intentions.

With McLaren producing roughly 1,500 cars annually, the Sports Series will more than double that volume while they continue to introduce at least one new vehicle per year. Bruce would be proud of the company’s evolution since the M12GT, the first McLaren road car. With fervor still running strong I’m now ready for the 675LT. Bring it on!