Suzuki adds more excitement to the Adventure-bike category with a thoroughly updated 2017 V-Strom 650 and V-Strom 650XT. Suzuki also announced the impending arrival of the refined and improved 2018 V-Strom 1000 and V-Strom 1000XT. Fifteen years after the launch of the 2002 V-Strom 1000, Suzuki has evolved the V-Strom lineup into a family of highly respected adventure bikes. Long-distance riders, commuters and weekend adventurers will appreciate the updates Suzuki brings in engine performance, electronics advancements and rider comfort. 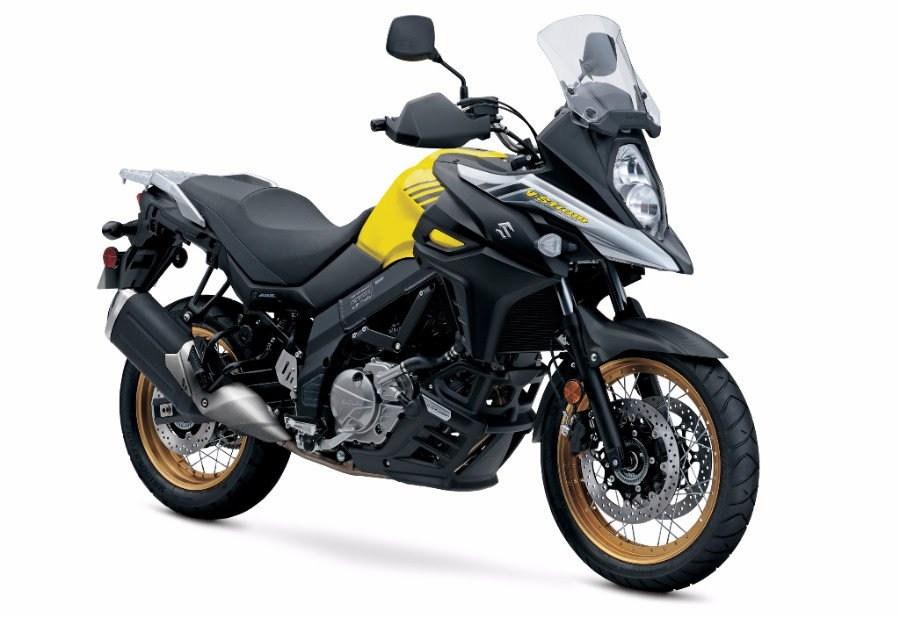 2017 V-Strom 650 & V-Strom 650XT
The V-Strom 650 get aggressive new styling for 2017 with a new beak-style fairing, featuring vertically stacked headlights that helps the V-Strom 650 and 650XT cut through the wind and protecting the rider in style. The new 3-way height-adjustable windscreen was wind-tunnel tested to reduce wind sounds, buffeting and rider fatigue. The fairing holds a new multi-function instrument panel is similar to the V-Strom 1000 panel, but has functions unique to the V-Strom 650 models.

The new fuel tank maintains its 5.3 gallon capacity, but is shaped to be thin at the rear to flow into the slimmer, two-up seat which aids the rider in touching the ground. The sub-frame is updated with a strong, resin cargo rack and mounting points for optional luggage now unitized across the entire V-Strom family. 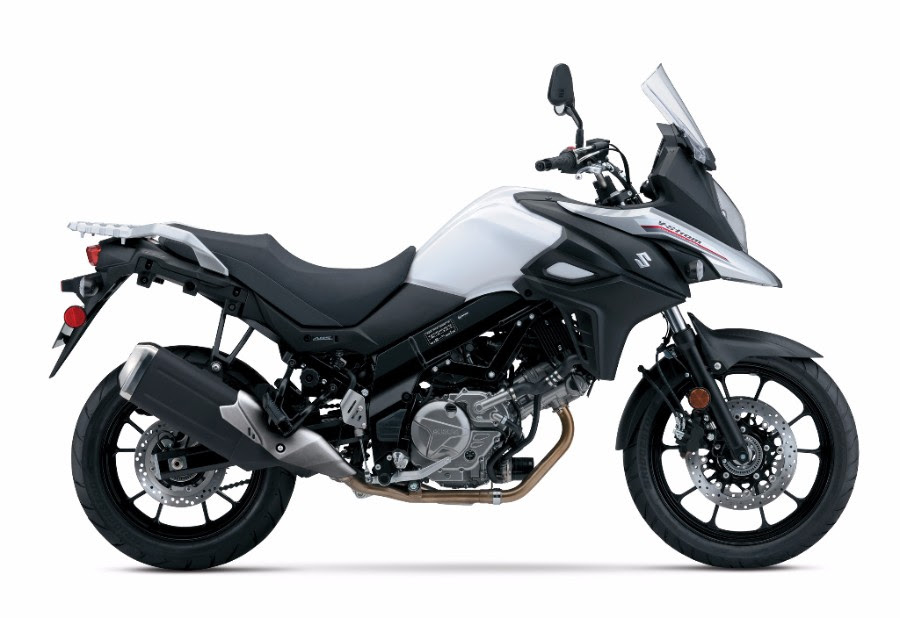 A very important new feature on the V-Strom 650 and 650XT that is not found on Adventure bikes of this size is Suzuki’s advanced Traction Control System*, which lets the rider control the throttle with more confidence in various riding conditions. It continuously monitors front and rear wheel speeds, throttle opening, engine speed, and the selected transmission gear to adjust engine output if wheel spin is detected. There are three traction control modes (1, 2, and OFF) and the difference between the modes are their sensitivity to road conditions.

The V-Strom 650 and 650XT now feature the Suzuki Easy Start system which lets the rider start the motorcycle with a momentary press of the start button without pulling in the clutch lever when the transmission is in neutral.

Color and Pricing for the V-Strom 650 and V-Strom 650XT are TBA with units hitting dealership floors on February 2017. 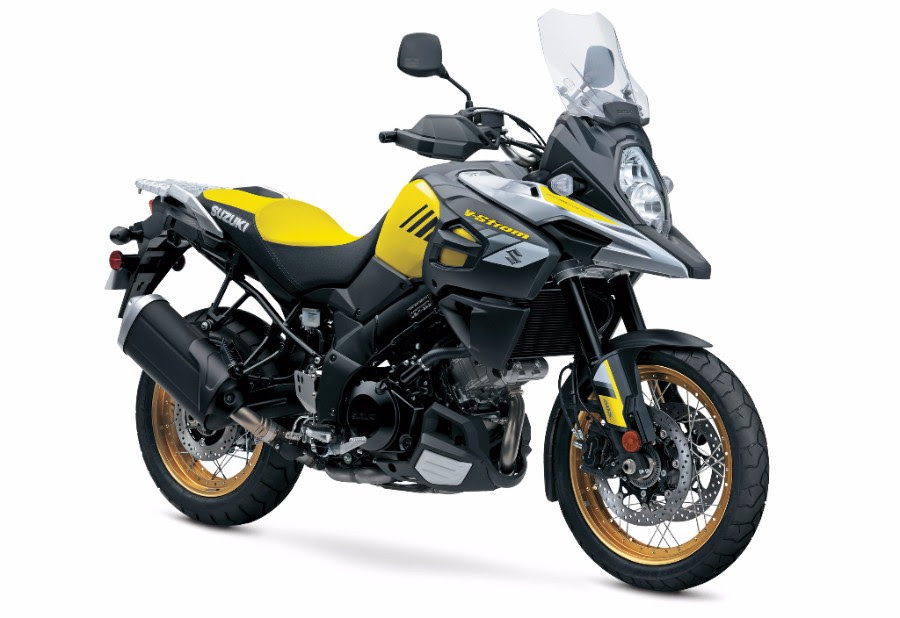 2018 V-Strom 1000 & V-Strom 1000XT
The V-Strom 1000 and 1000XT’s bold new fairing design is achieved by a straight styling line from the tip of its beak back to the fuel tank. This is a sharp and aggressive refinement of the Suzuki DR-Big inspired appearance. The height- and angle-adjustable windscreen has a new shape and is 49mm taller. The windscreen was developed through extensive wind-tunnel testing to reduce wind noise and rider fatigue. Suzuki’s patented mechanism allows the windscreen angle to be easily adjusted by hand.

The V-Strom 1000 and 1000XT’s Anti-lock Brake System (ABS) has been updated with Suzuki’s new Motion Track & Combination Brake System. This system aids rider control during sudden braking, even in corners, and will help the rider continue cornering on the originally intended line. 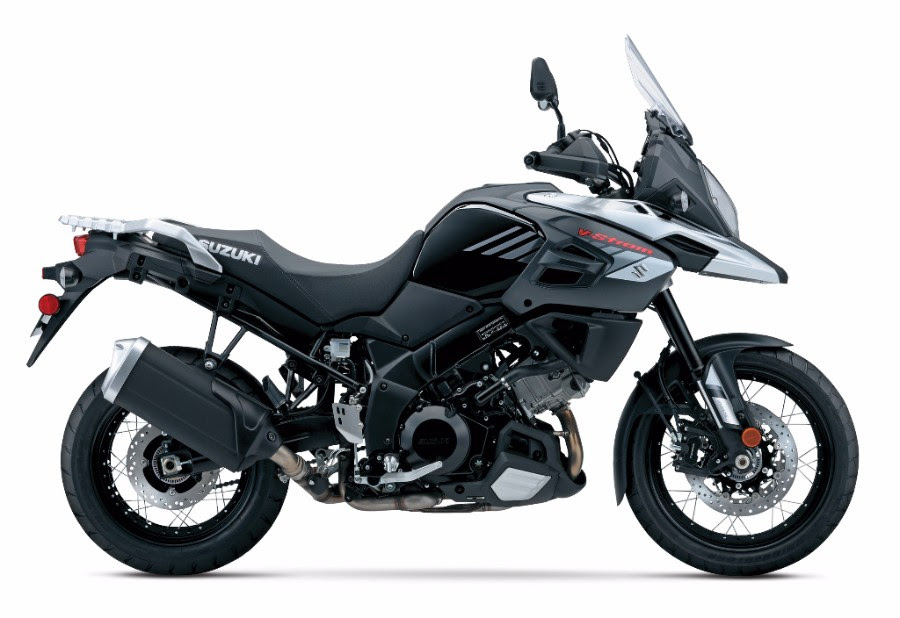 Suzuki’s debuted its first motorcycle traction control system on the V-Strom 1000, which enables the rider to control the throttle with more confidence in a variety of riding conditions.

* The Traction Control System is not a substitute for the rider’s throttle control. It cannot prevent loss of traction due to excessive speed when the rider enters a turn and/or applies the brakes. Neither can it prevent the front wheel from losing grip.

** Depending on road surface conditions, such as wet, loose, or uneven roads, braking distance for an ABS-equipped vehicle may be longer than for a vehicle not equipped with ABS.  ABS cannot prevent wheel skidding caused by braking while cornering.  Please drive carefully and do not overly rely on ABS.