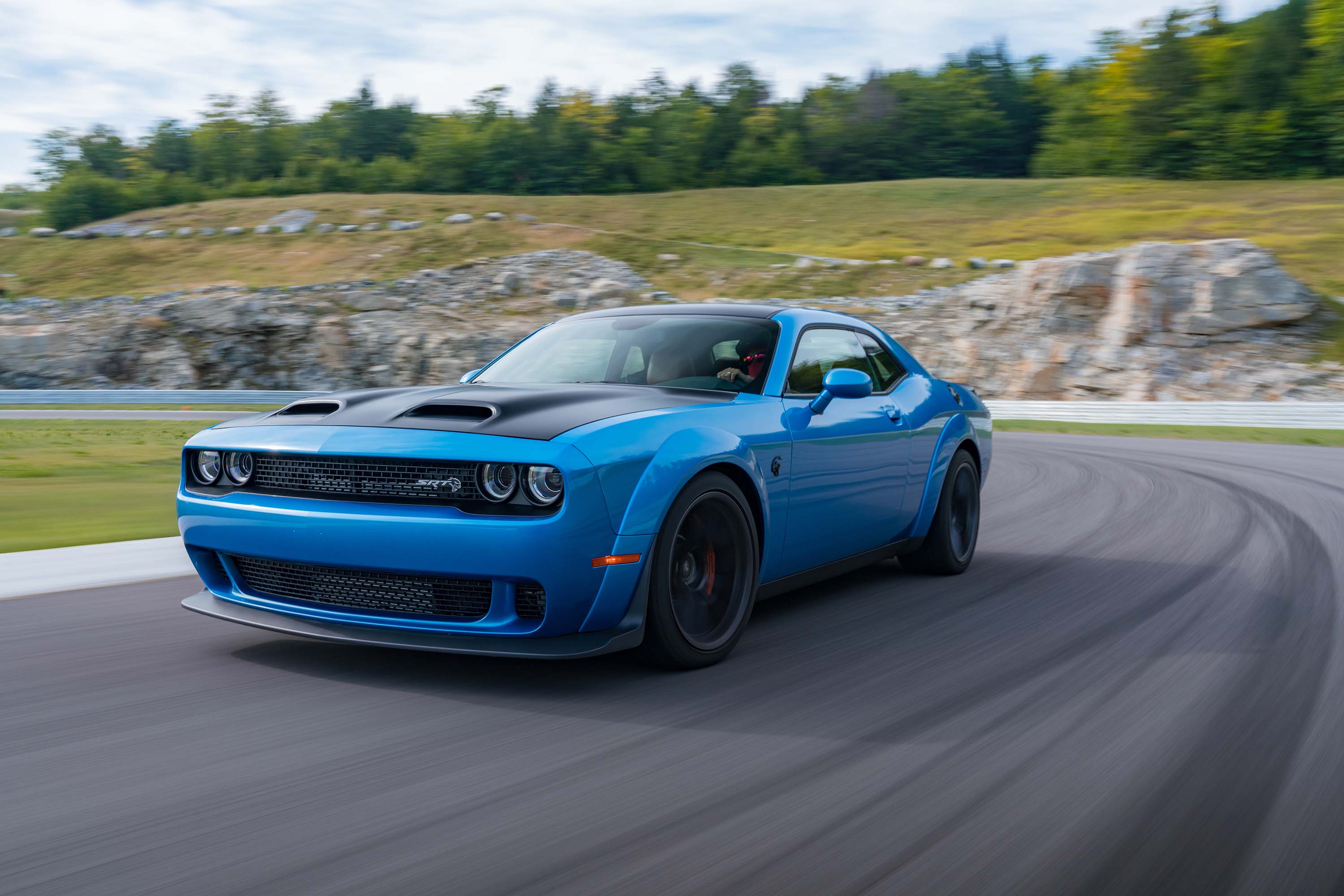 Experienced by Frank A. Aukofer

With its unrivaled new Challenger SRT Hellcat Redeye and a slew of other bulked up coupes, it looks as if Dodge intends to overpower the market for muscle cars. Counting the Redeye, the company now offers nine brawny Challenger pony cars including a purpose-built drag racer and others with all-wheel drive that cover an affordability spectrum aimed at enthusiasts from modest means to those with big bucks.

The focus at the Club Motorsports 2.1-mile road racing course in Tamworth, NH was on two new Challengers: the R/T Scat Pack Widebody and the pinnacle SRT Hellcat Redeye which Dodge touts as “the most powerful, quickest and fastest muscle car” in the world. Numbers testify to the claim. The Redeye is a step up from the Hellcat, which itself is a more powerful version of the original SRT Hellcat. It astonished enthusiasts in 2015 with a 707-horsepower, 6.2-liter supercharged V8 engine that sent 650 pound-feet of torque to the rear wheels. The 2019 Hellcat gets a bump from the same basic engine to 717 horsepower and 656 pound-feet of torque. But the Redeye, with its supercharged 6.2-liter V8, revs up 797 horsepower, or 80 more than the regular Hellcat—if any of these machines could be called regular. Torque jumps to 707 pound-feet.

Two transmissions are offered on the Hellcat: a six-speed manual gearbox with a twin-disc clutch or a beefy eight-speed automatic transmission. The Redeye comes only with an even stronger eight-speed automatic with a manual-shift mode controlled by paddles on the steering wheel. As laps on the racetrack here demonstrated, however, the paddles likely will prove superfluous to most drivers because the eight-speed’s shift points are so computer-calibrated that the driver can forget about shifting and focus on picking fast lines through the curves. 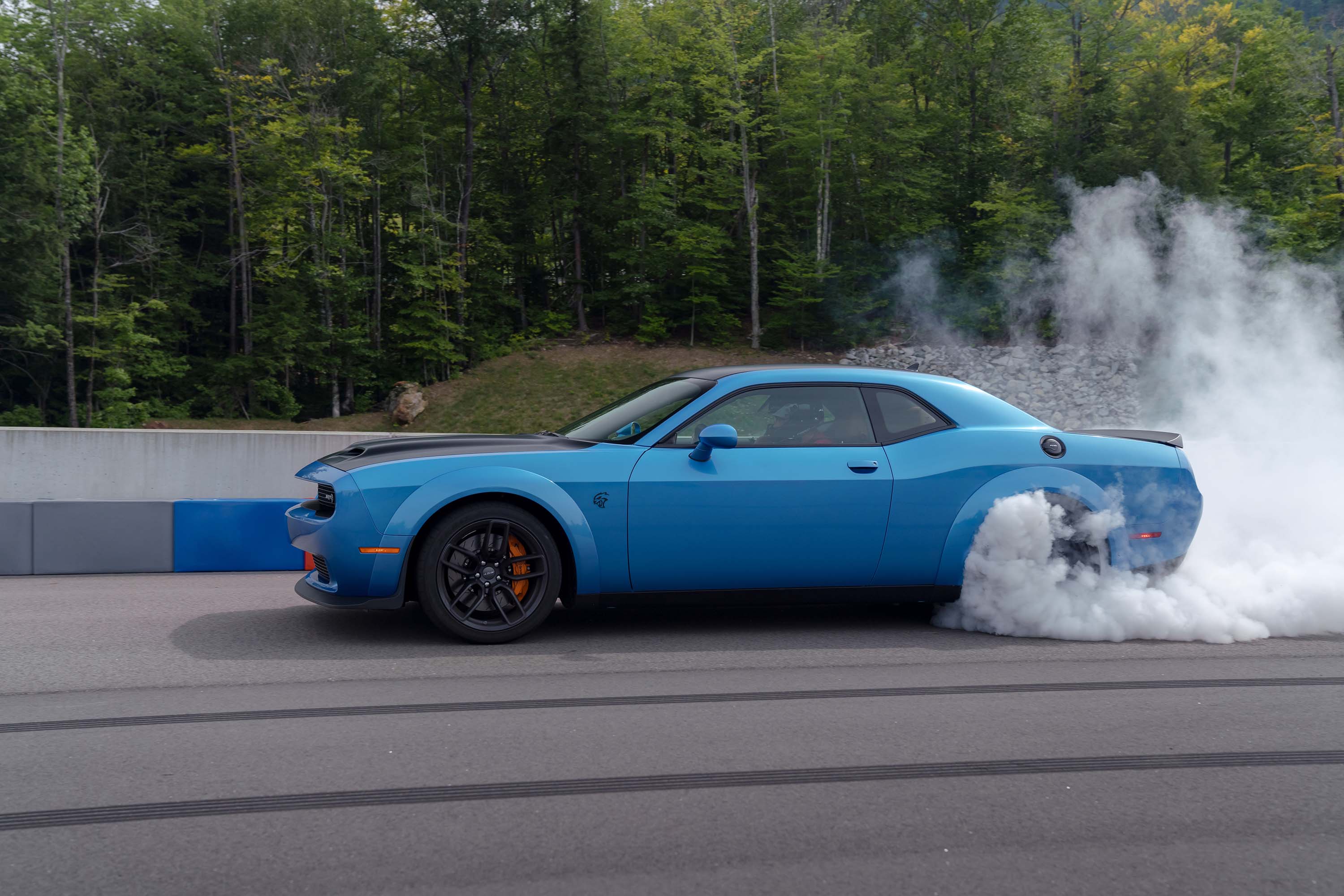 Besides the Hellcat Redeye, the Dodge girls and boys offered track drives in the Challenger R/T Scat Pack, which gets its power from a 485-horsepower, 6.4-liter V8 with 475 pound-feet of torque. It is available with both the eight-speed automatic transmission and a six-speed manual gearbox, one of which was at the track. Interestingly, the Scat Pack had a stiffer suspension system than the Hellcat Redeye, which enabled it to finesse curves that the Redeye, with some slight body lean, overwhelmed with raw power.

Another distinguishing characteristic of the Redeye: docile manners in low-speed cruising. Though a driver can trigger an explosion under the hood by slamming the gas pedal, rocketing to 60 miles an hour in slightly more than three seconds, the Redeye casually acts like your grandmother’s Toyota Camry in downtown traffic. Both Hellcats and the R/T Scat Pack can put more rubber on the road with the $6,000 Widebody option package. It includes fender flares and 11-inch wide, 20-inch diameter alloy wheels with 305/35ZR20 all-season performance tires.

With full safety equipment, the Widebody’s Brembo brakes and a host of other options that included a 220-mph speedometer, navigation, motorized sunroof, high-performance audio system, leather upholstery and suede trim, the Hellcat Redeye’s $60,045 base price jumped to $88,410. Another version with comfortable and gripping cloth upholstery checked in at $81,331. Both prices include a $1,700 gas guzzler tax. 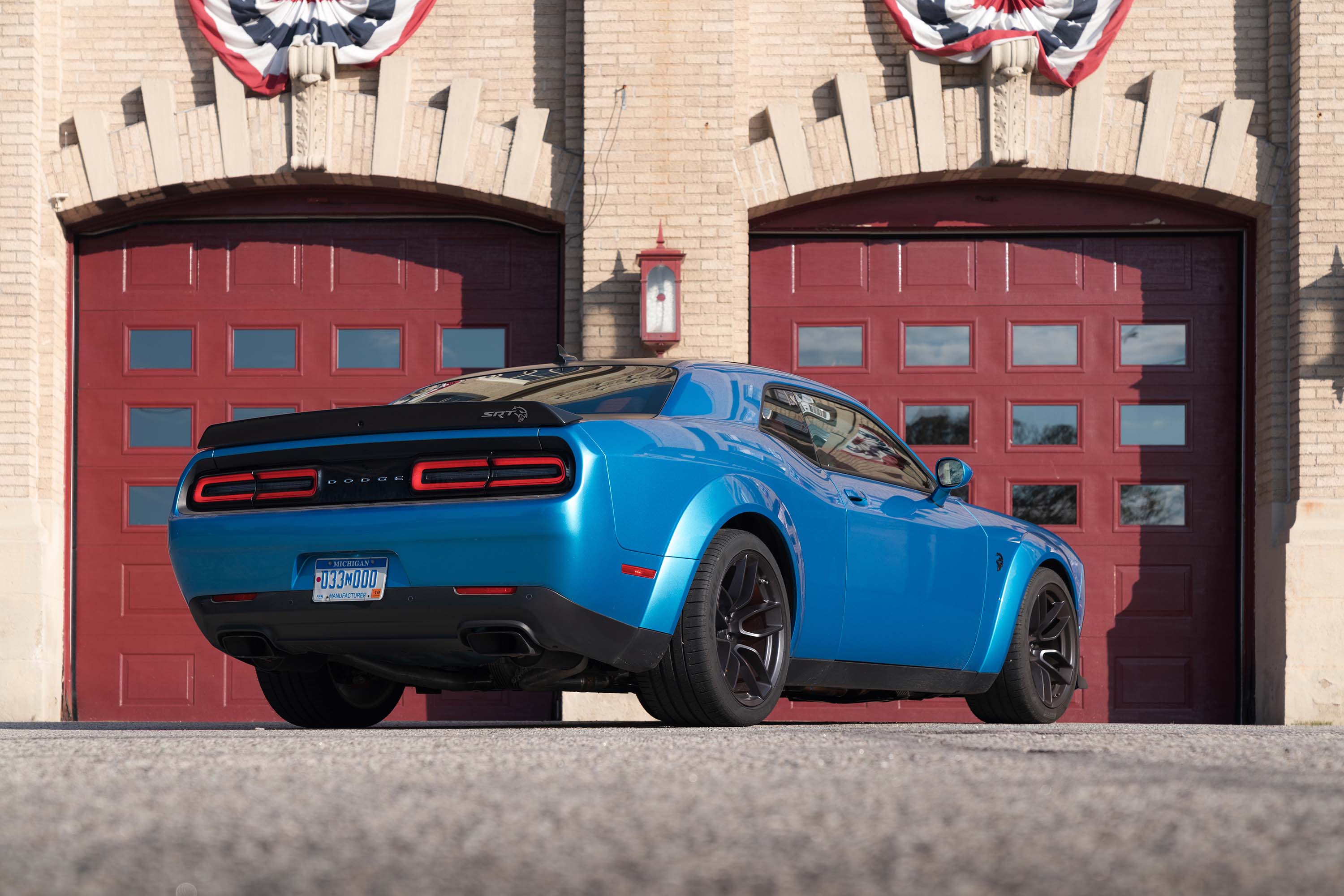 For less wealthy enthusiasts, Dodge offers the Challenger SXT and GT models, both with rear-drive or all-wheel drive. They are powered by the 305 horsepower Pentastar V6 engine, with 268 pound-feet of torque and a six-speed manual gearbox or eight-speed automatic transmission. The SXT stick-shift price starts at $28,690 and the GT is $31,390. Add $2,700 for the automatic.

No prices were announced for the Challenger R/T Scat Pack 1320, which is a model purpose-built for drag racing. It is intended as a less powerful successor to last year’s limited-production Dodge Demon, which was powered by a supercharged Hemi engine with 840 horsepower. It enabled the Demon to nail the quarter-mile drag strip in 9.65 seconds.

The Scat Pack 1320—the number represents the linear feet in a quarter mile—uses the same Hemi 392 engine as other Scat Pack models. Individual buyers will be able to customize their dragster rides. As with the earlier Demon, the 1320 comes only with a driver’s seat but a front passenger seat and a back seat are available for $1 each.

Base price, including destination charge: $60,045.