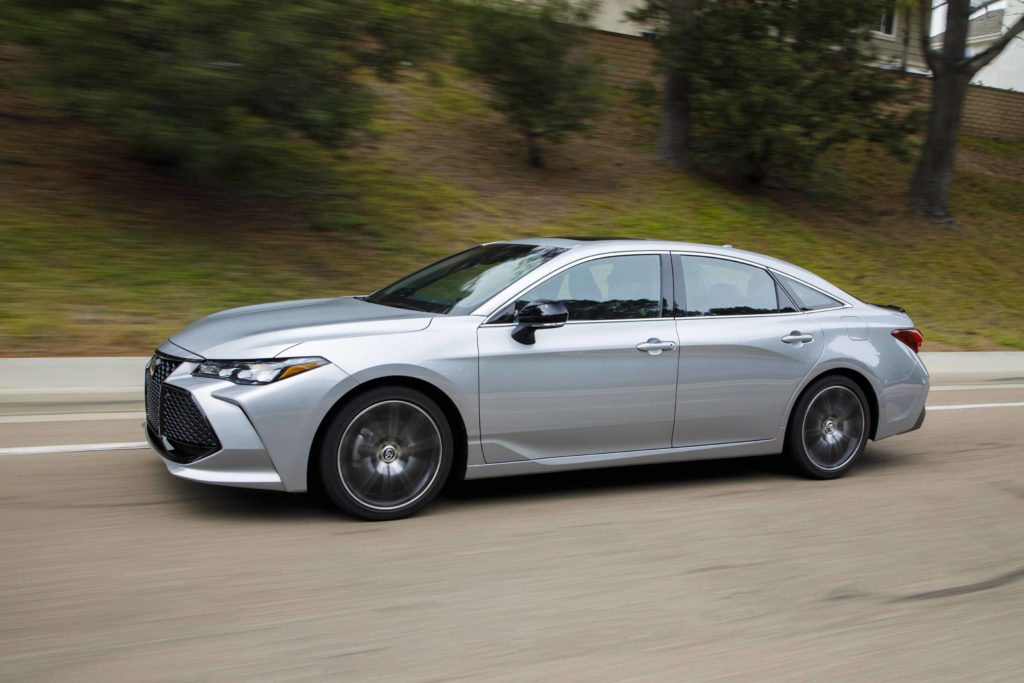 Wow, the 5th generation Toyota Avalon is a pretty special vehicle as I discovered out in San Diego, California last week during the national press launch. In fact, if the badging were to be removed quite a few people would confuse the large sedan as a member of the Lexus family, especially with that massive grille. Representing as Toyota’s flagship vehicle the 2019 Avalon has been rebuilt from the ground up with a body that is now wider, longer and lower and a tech focused cabin that is styled with soft touch materials, true Yamaha wood inlays and metal accents.

My wife Misa and I are owners of a 4th generation 2014 Avalon so I am very familiar with the attitude this vehicle represents and how it appeals to the consumer market. We have a white on black fully loaded Limited model that satisfies all of Misa’s needs. And this is coming from a person that downsized from an Audi Q7 and still remains satisfied. The only thing that is disappointing is the forgiving suspension which reduces her driver confidence. Well, I didn’t have that problem in the new Avalon which is empowered by Toyota’s Adaptive Variable Suspension (standard on Touring) with on the fly damping adjustments consisting of 650 levels within 20 milliseconds. Driving characteristics of AVS can change based on the selection of the drive modes (Eco, Normal/Custom, Sport, Sport +). Moreover, AVS is not an air suspension so owners will not have to worry about future repair costs which can be expensive on those types of units. This system uses fluid from the hydraulic shocks to create stiffer or softer rides. 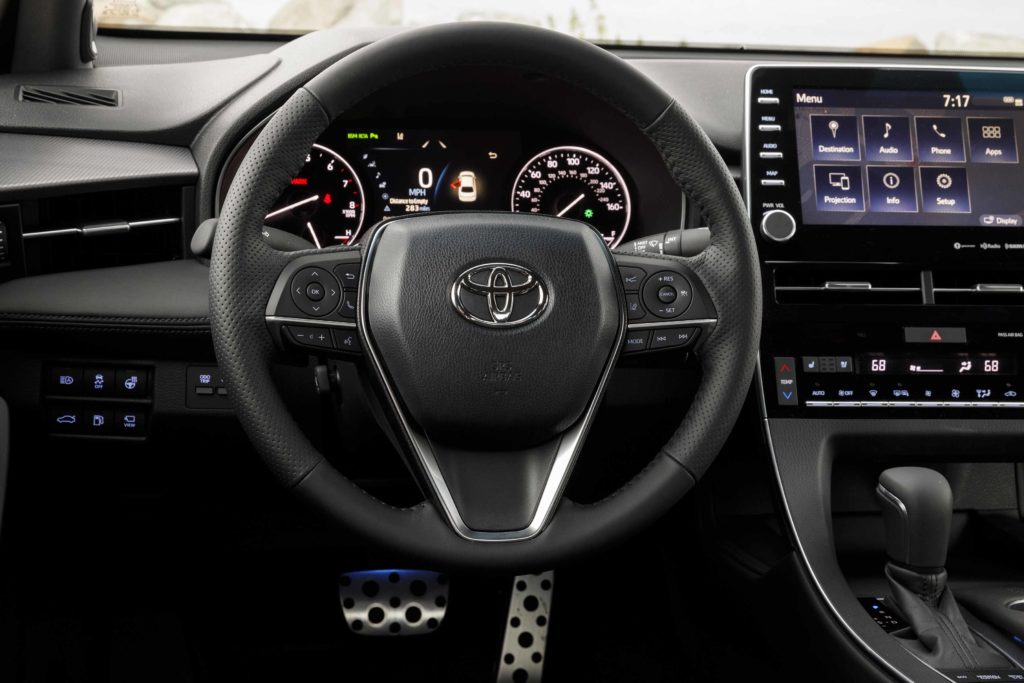 The new Avalon will arrive to dealerships in May in four basic grades: XLE, XSE, Limited and Touring. Each of which can be copped as a hybrid model except the Touring. So basically, these options provide the premium, midsize sedan market with four more gasoline models and three additional hybrids to choose between. The only setback in my opinion is the lack of an all-wheel drive option which would be highly welcomed in area codes with wild weather patterns like the Northeast region.

In addition to a longer wheelbase the Avalon features a chiseled frame with sharp edges, lines and creases, slim LED headlamps, new LED taillights, a unified lower and upper grille, a graceful rear end, tangential vents, quad exhaust tips in chrome on some models, trunk lid spoiler and under body panels. Adaptive LED Cornering Lamps are standard on both the Limited and Touring model. The vehicle is very striking and attractive. 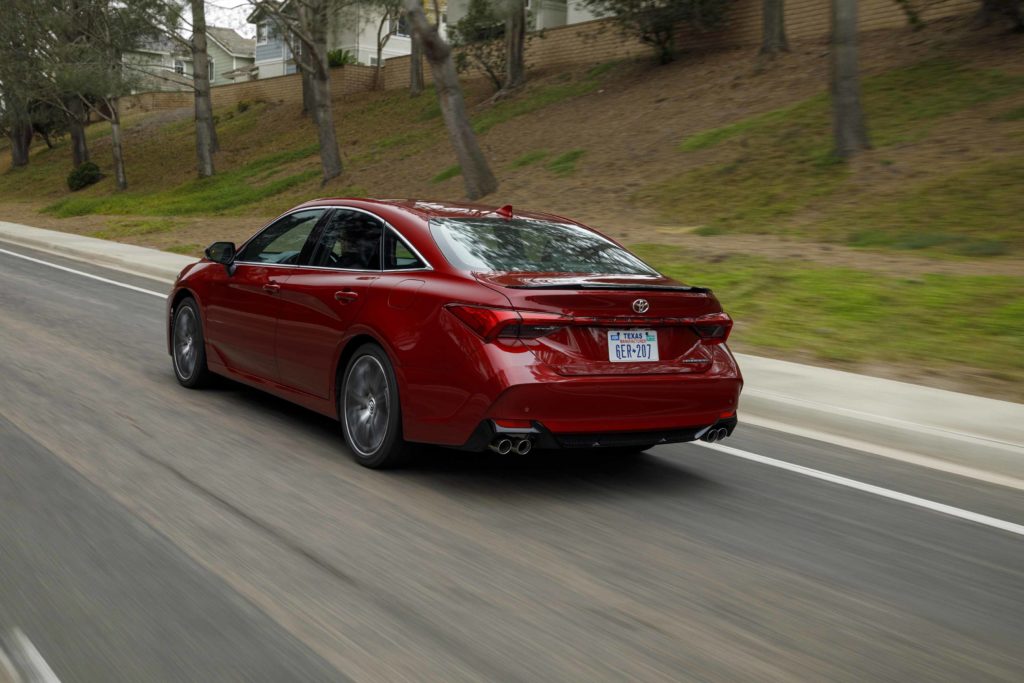 In San Diego my drive partner and I enjoyed a few epic days of fun in the Sun in the Avalon as we cruised from the coast to Balboa Park which is a 1,200-acre urban cultural park near downtown.  Our ride of choice was a Midnight Black Metallic Avalon Touring which was powered by the 3.5-liter V6 DOHC engine with an output of 301-horsepower and 267 lb-ft of torque. It’s paired with a Direct Shift 8-speed automatic transmission and aluminum paddle shifters. Expect 26 combined MPG. Highway acceleration is superb, steering is centered and its agility is favorable for quick getaways. My ride also featured 19” machine finished black alloy spins tucked in 235/40 R19 Bridgestone rubber. The other engine of choice is the 2.5-liter Dynamic Force 4-cylinder found on the hybrid models with 215-horsepower (net) and an estimated 44 combined MPG.

Toyota wants to attract a younger buyer for the Avalon so of course they created a cockpit conducive to youthful lifestyles. I know exactly what they mean because Misa actually purchased the family Avalon from her dad who is in his 60s. Updates include a cabin that is roomier and also features a noise cancelling windshield. A 9” vertical touchscreen display dominates the driver centric center stack and embeds, navigation, a backup camera, Apple CarPlay, Verizon Wi-Fi, Amazon Alexa, Entune 3.0 with JBL’s 1,200-watt and 14-speaker audio system and much more. We also had a power sunroof, the 10” color Head-Up Display, aluminum pedal covers, a Qi-wireless charge pad, frameless mirror and five USB ports including two in the rear. Let’s also not forget the smartphone cupholder! 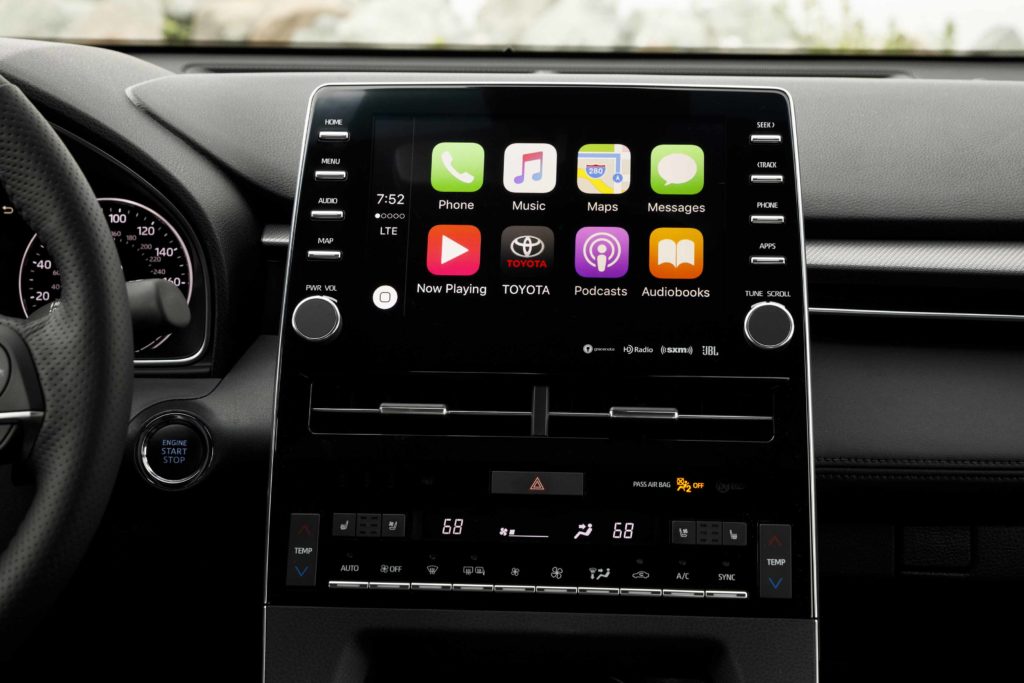 Safety will always be a hallmark of this Japanese auto brand because it’s in their nature. Toyota Safety Sense for example is standard across the lineup and gives you Pre-Collision System with Pedestrian Detection, Full-Speed Range Dynamic Radar Cruise Control and Lane Departure Alert with Steering Assist. In addition to 10 standard airbags your Avalon will also come equipped with the Star Safety System with Enhanced Vehicle Stability Control, Traction Control, Brake Assist, Smart Stop Technology and more.

Pricing starts at $35,500 for a gas Avalon XLE and $36,500 for the Hybrid and can run up to $42,200 for the Avalon Touring model. Now the next decision is to see if we ride out on Toyota’s impeccable dependability and keep our 2014 Avalon or get with the signs of the time and bring home the latest and greatest!