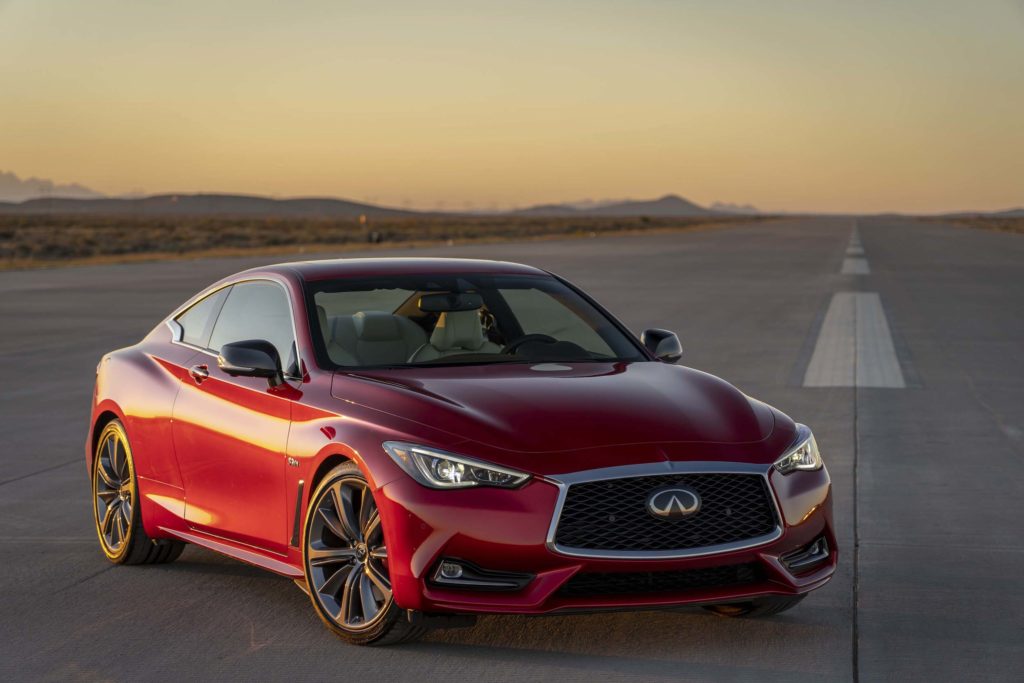 INFINITI may be known more so for its bevy of luxury sedans and SUVs of varying degrees, including the full-size, immaculate QX80, but let us not forget the execution of the Q60 Red Sport 400 AWD performance coupe. As the name implies, the supōtsukā (Japanese sports car) kept me persistently engaged with road excitement from its 400-horsepower twin-turbo V6 engine and grappling handling by way of INFINITI Intelligent all-wheel-drive.

My weekly loaner was outfitted with every bell and whistle possibly imaginable. Of course, I wanted to take it out more often but am also respecting some of the intricacies of social distancing and quarantine life. Nevertheless, when it was time to hit the store to re-up on essentials, I ascertained to take the roads less traveled, basically the longer routes. With 400-horsepower and 350 lb-ft of torque at my disposal, hitting the pavement was glorifying. The 3-liter pairs with an active 7-speed automatic transmission with long paddle shifters, manual shift mode, Downshift Rev Matching, and selectable Drive Mode to set the Q60 Red Sport 400 in Personal, Sport+, Sport, Standard, Eco, or Snow modes. 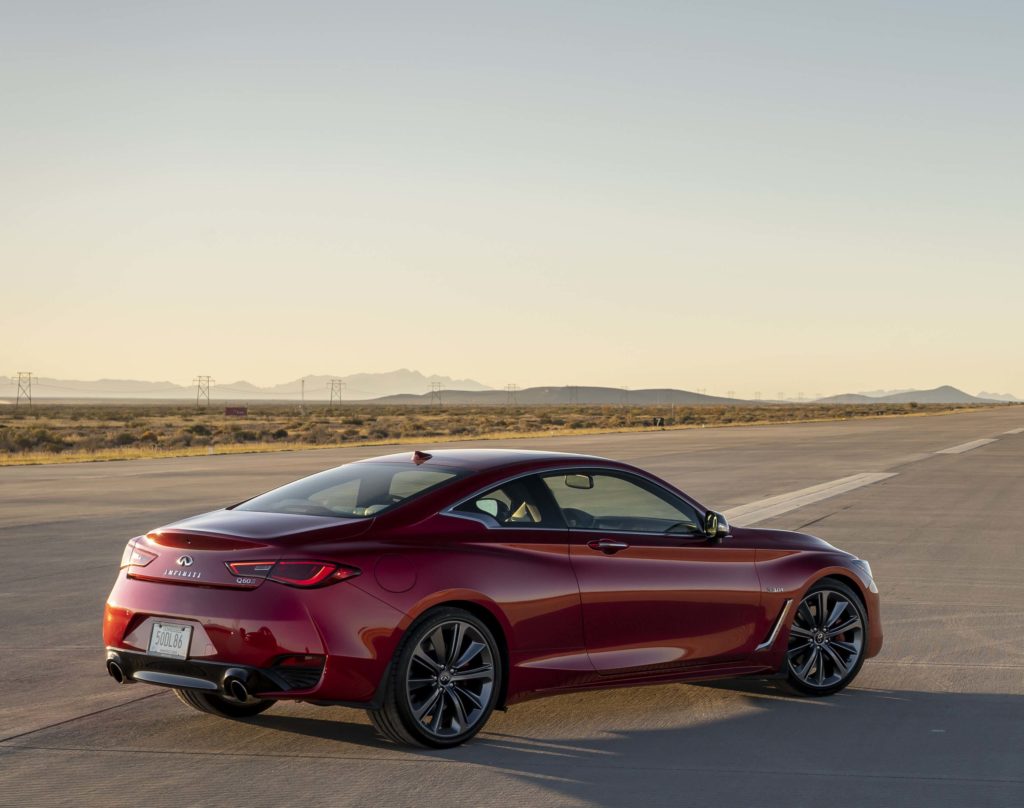 If you want to feel the coupe fly, then switch on Sport mode and keep the gear in 2nd using the paddle shifter or manual mode and let her rip. The Dynamic Digital Suspension connects with exclusive 5-spoke 20” aluminum alloy rims ($1,790), which are wrapped in 255/35 R20 Bridgestone Potenza all-season performance tires. I mentally exalted the Japanese gunner after every drive. Steering is a bit light for the thorough performance, but the sporty brake package is impressive and effective at slowing down the vehicle’s mass from high speeds. And the calipers look good in red. Exclusive Red Sport oval exhaust tips are throaty throughout accelerations to empower your drive. The upgraded $698 Axle-Back Sport Exhaust Kit is available for both the Q50 and Q60 with turbocharged engines. Yet, I wished the system was active so the sound could be deadened when cruising through friendly neighborhoods or setting out on early mornings.

Back in November, I recall fond memories of one the most thrilling activities with the Q60 on the Red Sport Test Track at the Jornada del Muerto desert basin of New Mexico, where INFINITI celebrated its 30th anniversary. With traction control off, I was able to drift around the dirt course with aggression. Of course, the AWD models were more stable and controllable around the tight turns, but the RWDs were pure entertainment due to added rear-wheel slippage. On straightaways, the Q60 Red Sport 400 AWD moves like sprinters from Kingston, Jamaica, when you pull from its twin-turbo energy. In turn, the RED SPORT is docile and obedient when typical, daily driving is needed, such as work commutes. 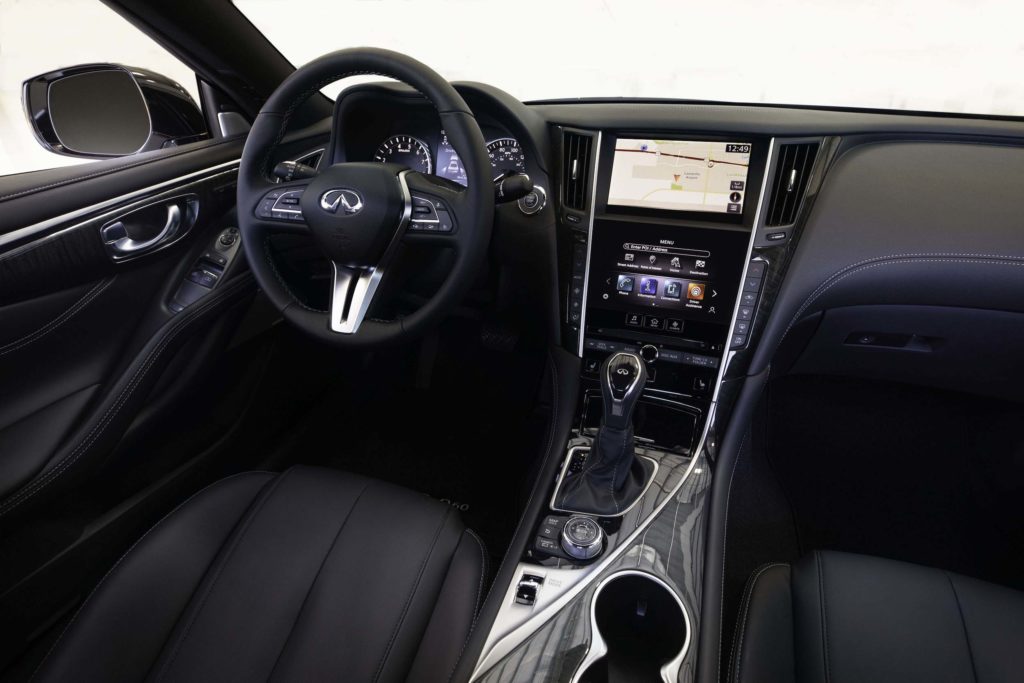 INFINITI shaped the Q60 with conventional lines and didn’t exaggerate the body too much. My only gripe is the rear, which is reminiscent of the old Lexus SC that was ahead of the curve at the time but looks soft now. The chrome brow lining the rear side windows is a bit much as well on a car that doesn’t need all that chrome since it outlines the signature double-arch grille and windows. Razor-sharp headlights, an aggressive chin spoiler, and the $2,280 Carbon Fiber Package (rear decklid spoiler, mirror caps, fog lamp finishers, fender vents) highlight the rest of the ride. The sunroof is small, as is the trunk, but it’s not shallow and appropriately shaped to fit a large suitcase.

The 2020 Q60 RED SPORT 400 AWD is an ideal midsize, luxury sports coupe for customers looking for an enthusiastic driving package that elevates your status while tapping into the senses. Expect to pay $65,950 for the packaging in my loaner but $59,150 MSRP. 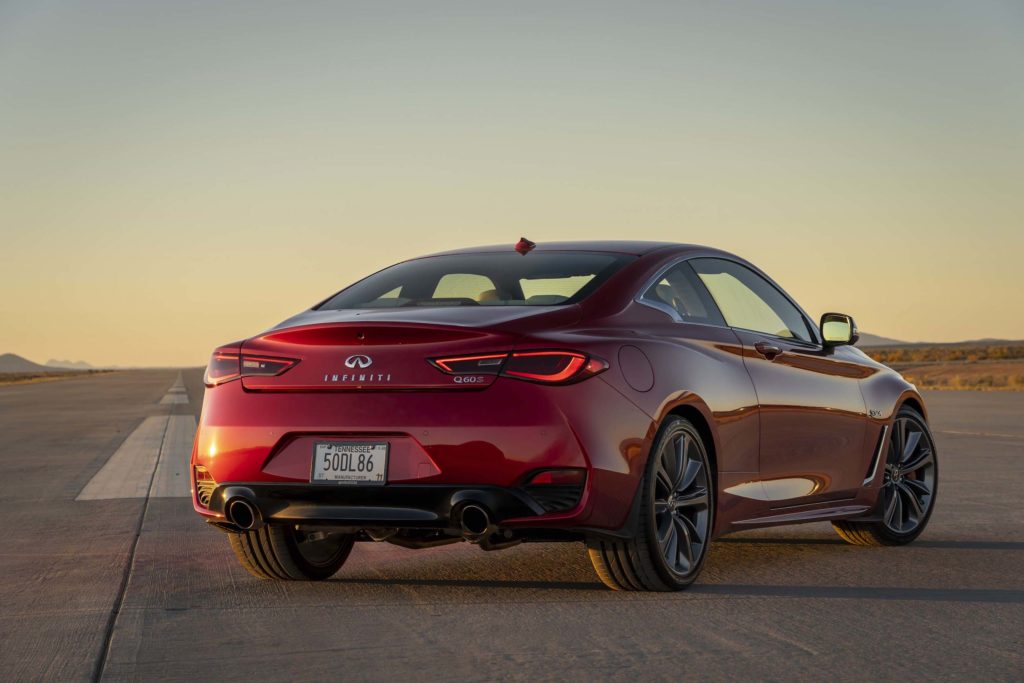