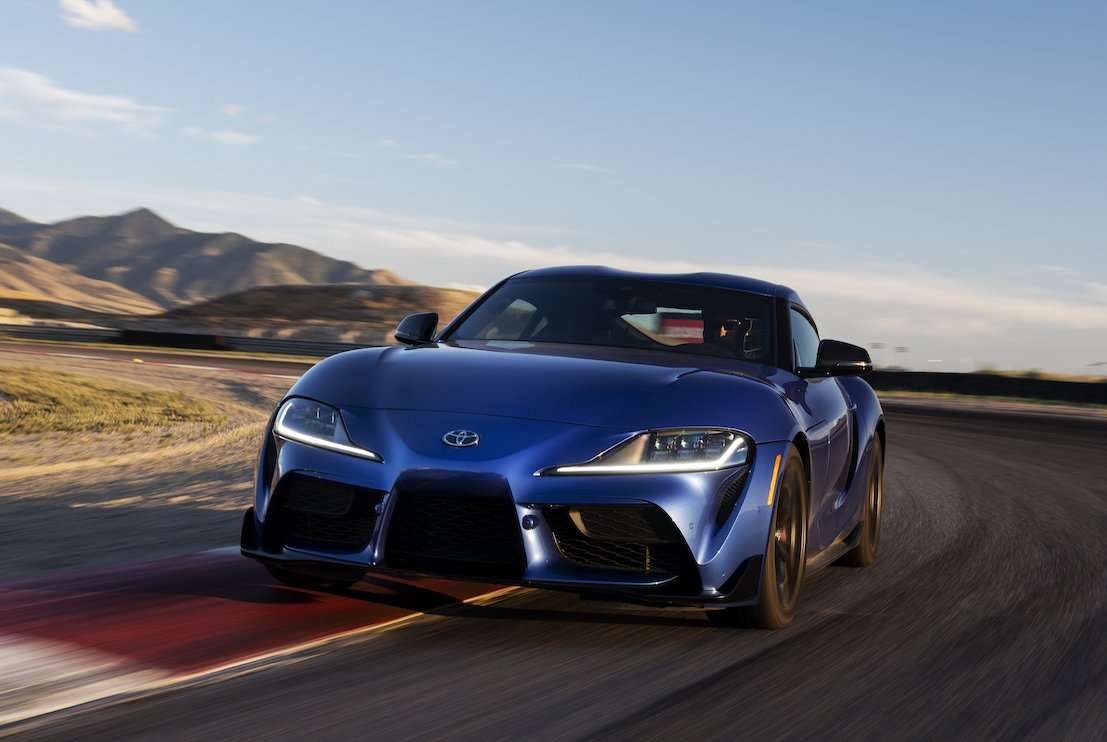 Track time at the Utah Motor Sports Campus was pretty exciting as we took the driver’s seat of Toyota’s 2023 GR sports car lineup including the 2023 GR Supra manual, 2023 GR Corolla manual, and the GR 86. Both the GR Corolla and GR Supra manual transmissions are new members of the GR family. With that in mind, Toyota chose an ideal city to host the national media event for the newfangled sports car brand. So welcome to Park City, Utah, home of the renowned Sundance Film Festival, impeccable ski resorts, active lifestyles, and lovers of everything serene and beautiful. The fresh air, mountain views, and scores of adventure sports like mountain biking created the perfect environment for extended test drives around Mother Nature with the GRs. 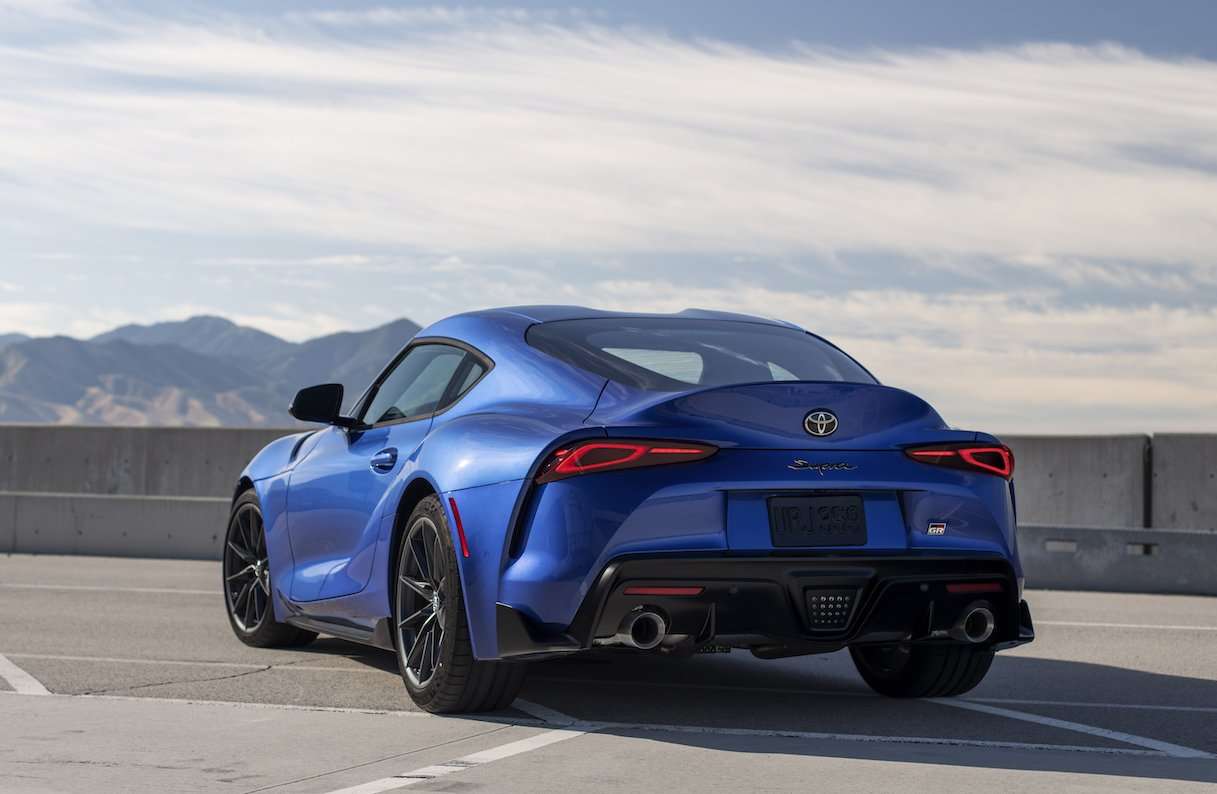 Our first focus was to experience “fast fun” in the RWD GR Supra with both gearboxes, although loyalists have been clamoring for a manual. Toyota Gazoo Racing heard their cries and granted their wishes for the 5th gen model. Power stems from a 3-liter in-line 6-cylinder turbo, which pushes out 382-horsepower, 367 lb-ft of torque, and pairs with the 6-speed intelligent Manual Transmission (iMT) with rev-matching.

For the 1-hour ride from Park City to Utah Motor Sports Campus, my drive partner and I piloted an automatic GR Supra before switching to the manual at the track. Of course, due to the partnership with BMW, the interior is still reminiscent of BMW including the gear shifter, iDrive dial, screen, and center stack. The carbon fiber interior trim is a refreshing touch to enhance the performance traits of the sporty coupe. I’m a fan of paddle-shifting automatics and prefer them to sticks, but I simultaneously understand the love and respect for manuals. I learned how to drive on a manual, so the adoration will always remain, especially when it’s a performance vehicle. 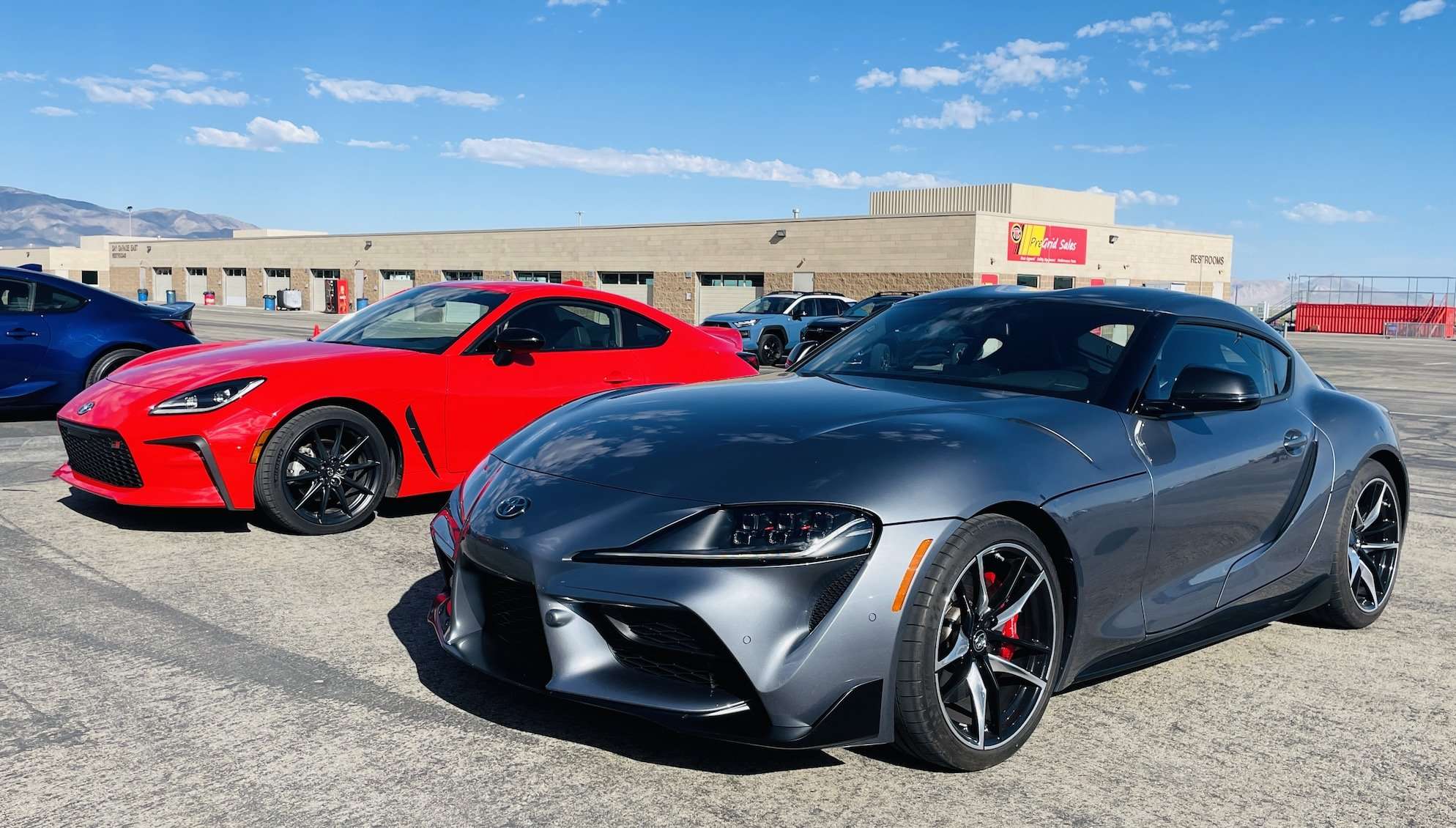 “When we revealed the GR Supra back in 2019, we tapped into a heritage nameplate for Toyota,” said Mike Tripp, Vice President of Toyota Vehicle Marketing and Communications. “But we were regularly asked if there would be a manual version. We immediately took that feedback to heart and started developing it in 2019. We’re happy to bring customers the perfect complement for Supra’s high torque, high output engine with a six-speed manual.” 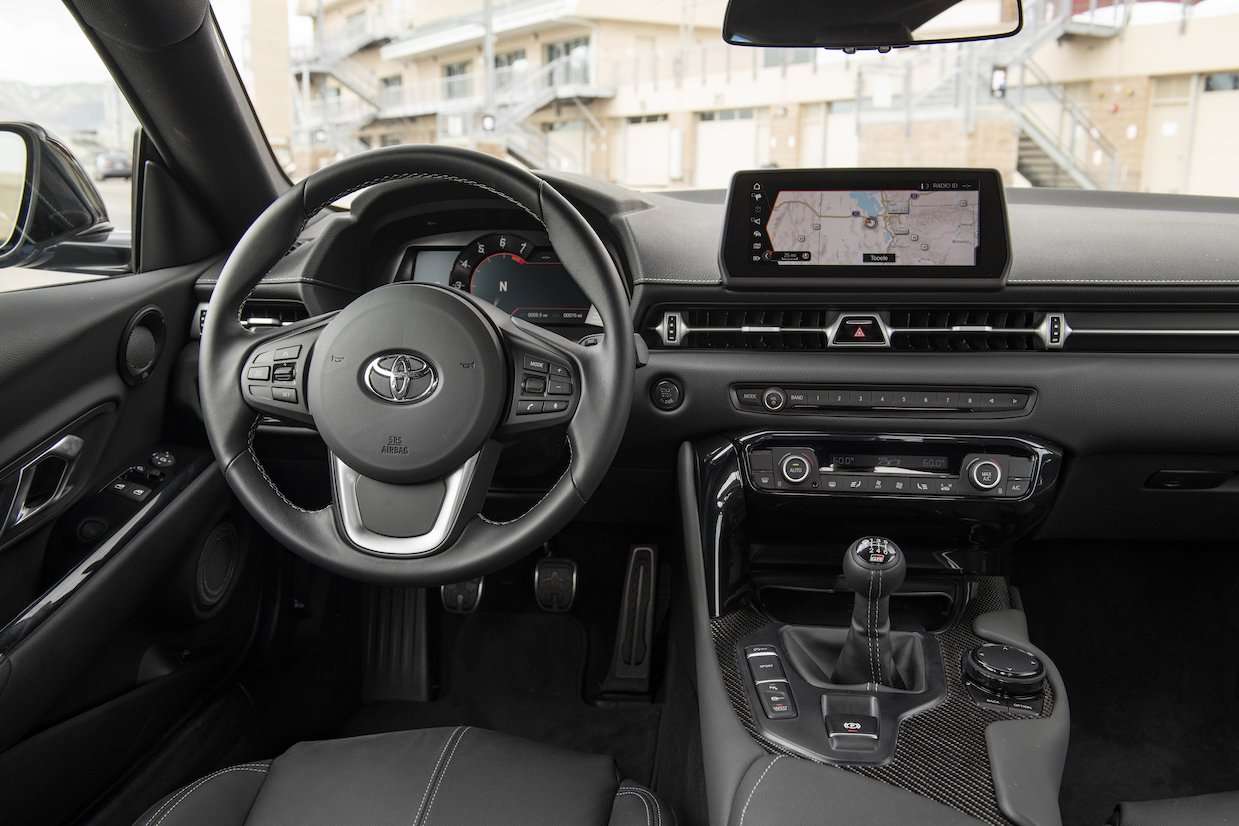 Starting at $43,540 for a GR Supra 2.0 I-4, Toyota GR offers the GR Supra in six models topping out at $58,345 for the Special Edition GR Supra 3.0 A91-MT which I drove on the track. The Manual Transmission is available as an option on the Supra 3.0 and 3.0 Premium. The A91-MT variant has a limited run of 500 and is blessed with exclusive Hazelnut leather-trimmed seats, GR logoed shift knob, and a 12-speaker premium JBL HiFi surround sound system. My CU Later Gray GR Supra (also comes in Burnout) featured a red “Supra” Badge and red GR Supra calipers. Frozen Gunmetal Grey 19″ 10-spoke forged aluminum rims with staggered Michelin Pilot Super Sport tires get you rolling when it’s time to let loose as I did around hairpin corners, the autocross, and the slalom. The little sporty guy is light, quick, and agile, especially in Sport mode and zips 0 to 60 mph in 4.2 seconds. Exterior styling is set off by a front splitter, 6-block LED headlights, Matte-black mirror caps, a black A-pillar, black window trim, black rocker panels, and a black rear diffuser with dual exhaust tips. Under the hood you will find red strut tower braces. 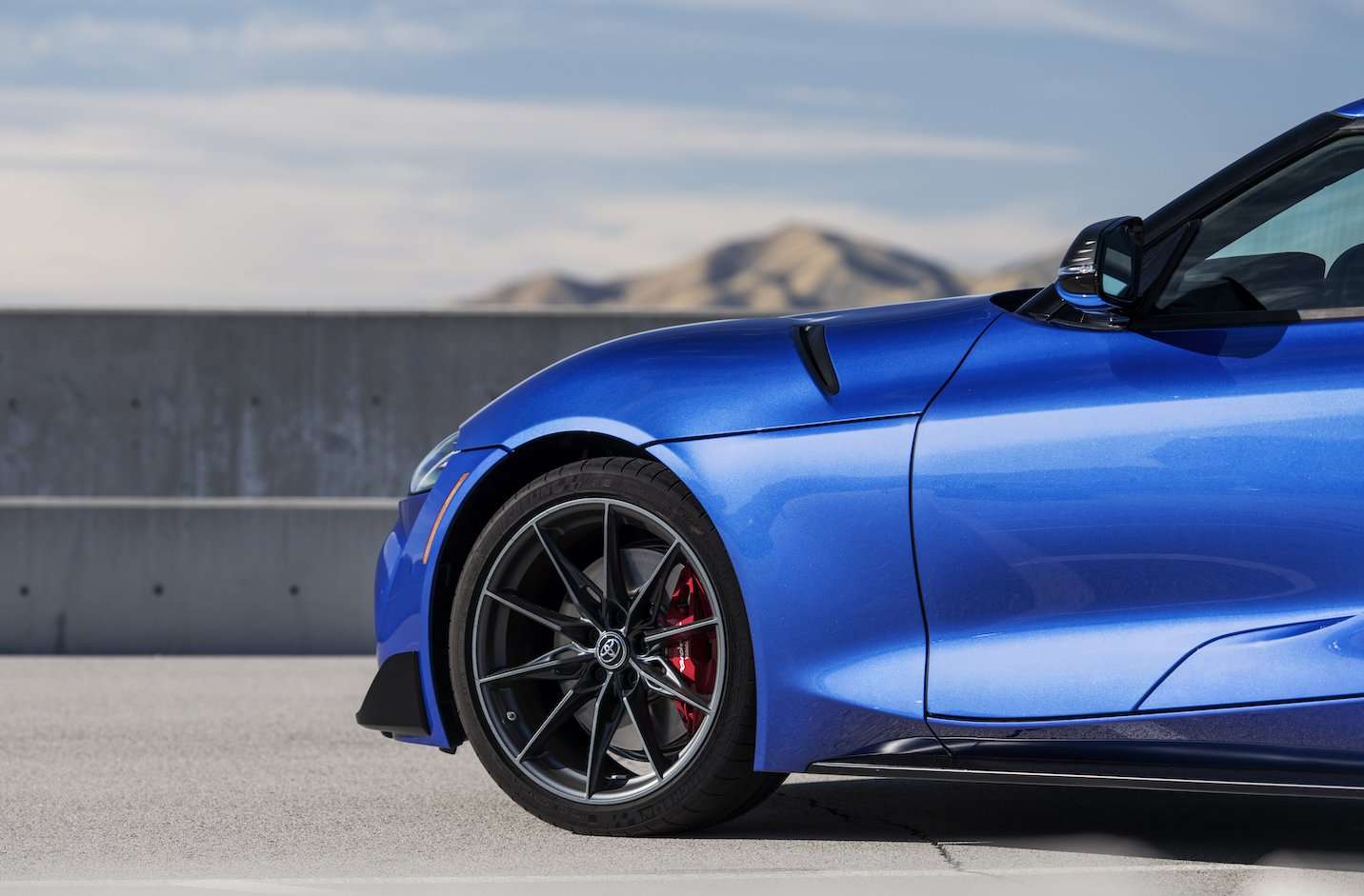 Adding a manual transmission option to the Supra lineup means Toyota will offer all three of its U.S. GR models with a stick, which is standard on the GR Corolla and available as an option on the GR86. In addition, the 10th Anniversary GR86 Special Edition will see 860 models built.

Wow, a Hot Hatch from Toyota was definitely on the agenda. Smoking around the track with a 1.6-liter 3-cylinder turbo with 300-horsepower, front and rear Torsen Limited Slip Differentials, GR Four AWD (can set it to 60/40 FWD, 50/50, or a RWD biased torque distribution at 30/70), and the 6-speed intelligent Manual Transmission (iMT) with rev-matching, and a hand brake for power slides was the highlight of the afternoon. Offered in three models (Core Grade, Circuit Edition, and MORIZO Edition) and three selectable drive modes, my Ice Cap GR Corolla featured a rear power diffuser in Gloss Black and Goss Black 18” 15-spoke cast alloy wheels, mirrors, window trim, tailgate spoiler, hood vents, and grille. Michelin Pilot Sport 4 tires are the rubber of choice and the triple exhaust tips pump flavor in your ear. The carbon fiber roof is also Matte Blacked out! 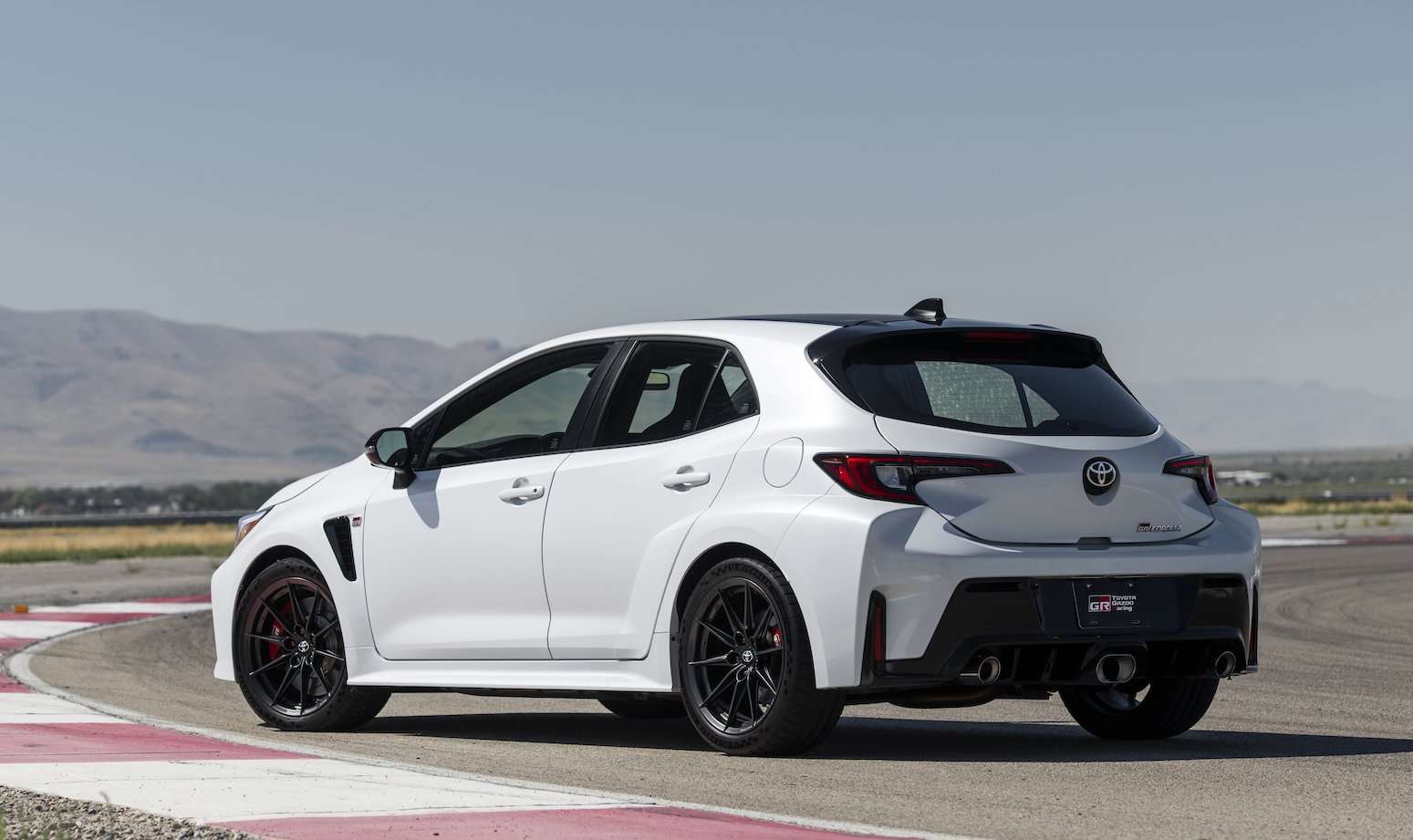 Expect a top speed of 142.9 mph, 24 combined mpg, and a 0-60 mph time of 4.99-seconds for Core and Circuit and 4.92-seconds for the track-tuned MORIZO which is devoid of rear seating. In addition, the GR Corolla Core and Circuit Editions see a max boost of 25.2 PSI and 26.3 PSI on the MORIZO Edition. The MORIZO Edition also receives increased torque from 273 to 295 pound-feet. For further responsiveness, a drive mode selector comes standard on all grades and consists of Eco, Sport, Track, and Custom settings. 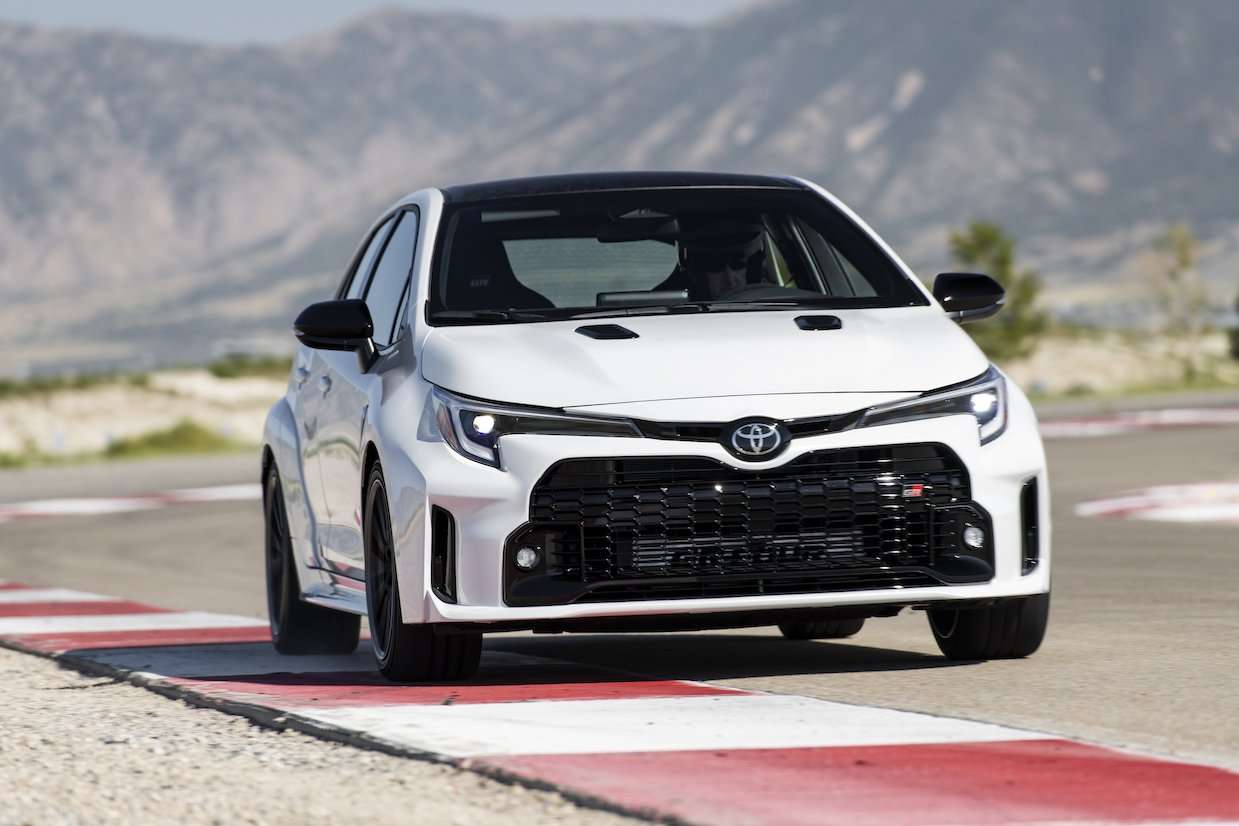 With a bolder stance from widened fenders, the GR Corolla blitzed quickly through the track obstacles. And stopping from heavy speeds was no problem with 4-piston front brake calipers painted red for clarity. Once situated inside the aggressive cabin, you will be appeased by metal pedals, Brin-Naub and synthetic leather-trimmed sports seats with red stitching, and a digital 12.3” instrument cluster that highlights shift points, AWD mode, turbo pressure, odometer, and more. 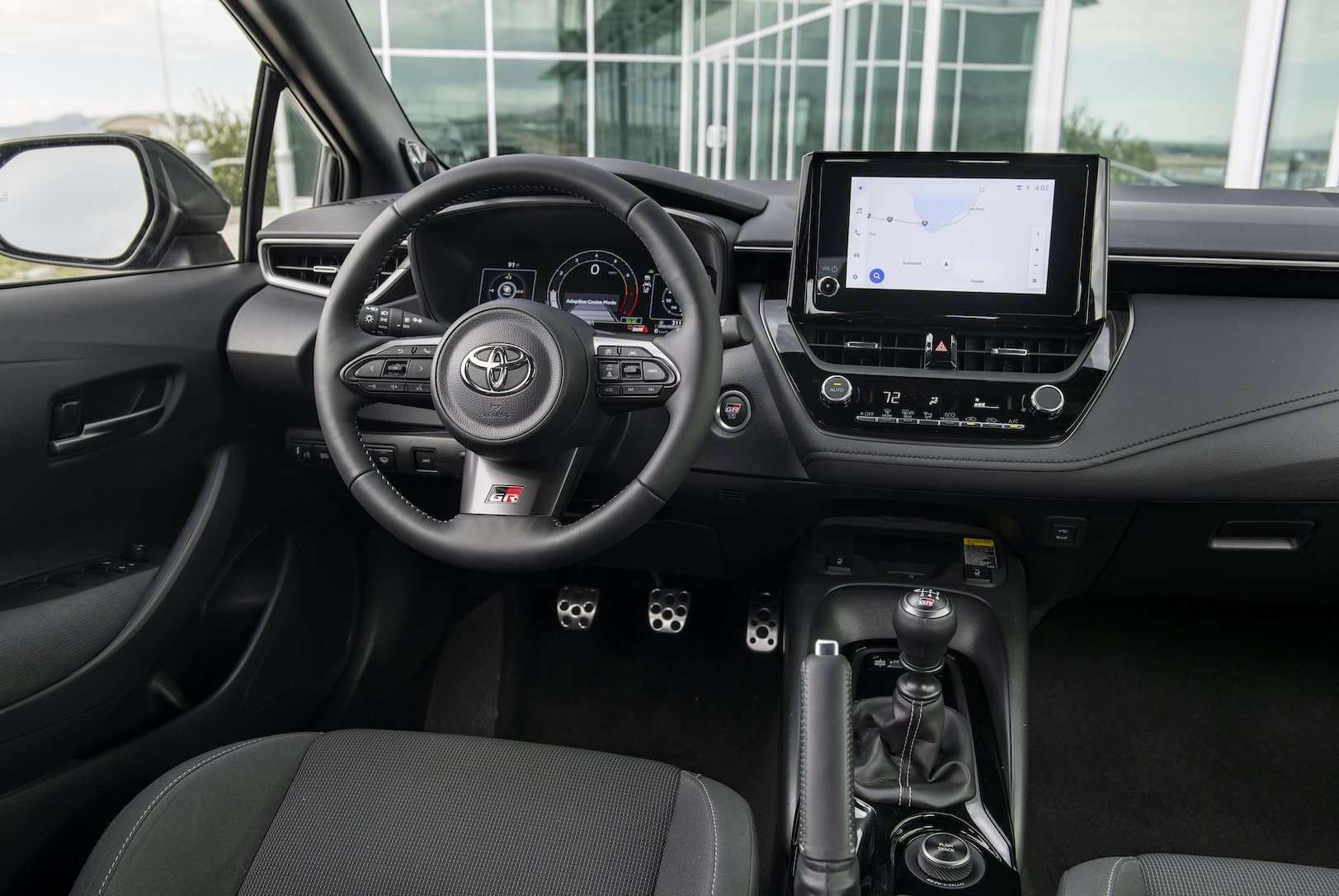