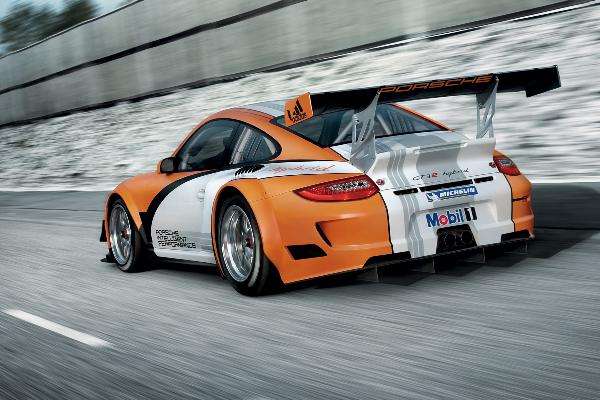 ATLANTA – 110 years after Ferdinand Porsche developed the world’s first hybrid, the Lohner-Porsche, Porsche engineers are now expanding this visionary drive concept with a production-based GT race car: Over the past 45 years, Porsche 911 race cars have recorded more than 20,000 victories and on March 4, a Porsche 911 GT3 featuring an innovative hybrid drive will make its debut at the Geneva Motor Show, opening a new chapter in the history of Porsche.

This innovative hybrid technology has been developed especially for racing, differentiating itself from conventional hybrid systems by way of its configuration and components. In the case of the 911 GT3 R Hybrid, the front axle features two electric motors, each developing 60 kW and supplement the 480 hp, naturally aspirated four-liter flat-six that drives the rear wheels. Instead of the heavy batteries usually found in a hybrid road car, an electrical flywheel power generator is installed inside next to the driver delivering energy to the electric motors.

Energy formerly converted into heat upon each brake application, and therefore wasted, is now converted into additional drive power in a very efficient manner.

In addition to increasing available drive power, depending on racing conditions, the hybrid drive can also be called upon to save fuel. By increasing the efficiency and, accordingly, the performance of the 911 GT3 R Hybrid, reductions can be made to the weight of the fuel tank or the car can make less frequent pit stops, for example.

After its debut in Geneva, the 911 GT3 R Hybrid will be tested in long-distance races on the Nürburgring. The highlight of this test program will be the 24 Hours on the Nordschleife of Nürburgring, May 15-16, 2010. The focus is not on the 911 GT3 R Hybrid winning the race, but rather spearheading technology as a “racing lab.” The intent is to provide hands-on know-how for the subsequent use of hybrid technology in road-going sports cars.

The 911 GT3 R Hybrid is a perfect example of the Porsche Intelligent Performance philosophy, a principle to be found in every Porsche: More power on less fuel, more efficiency and lower CO2 emissions – on the track and on the road.

About Porsche Cars North America, Inc.
Porsche Cars North America, Inc. (PCNA), based in Atlanta, Ga., is the exclusive importer of Porsche vehicles for the United States. It is a wholly owned, indirect subsidiary of Dr. Ing. h.c. F. Porsche AG. PCNA employs approximately 180 people who provide Porsche vehicles, parts, service, marketing and training for its 200 dealers. The dealers, in turn, provide Porsche owners with best-in-class service. Throughout its 61-year history, Porsche has developed numerous technologies that have advanced vehicle performance, improved safety and spurred environmental innovations within the automotive industry. The company continues to celebrate its heritage by adding to its long list of motorsports victories dating back to its first 24 Hours of Le Mans class win in 1951. Today, with more than 28,000 victories, Porsche is recognized as the world’s most successful brand in sports car racing. PCNA, which imports the iconic 911 series, the highly acclaimed Boxster and Cayman mid-engine sports cars, high-end Cayenne sport utility vehicles and the four-passenger Panamera Gran Turismos, strives to maintain a standard of excellence, commitment and distinction synonymous with its brand.