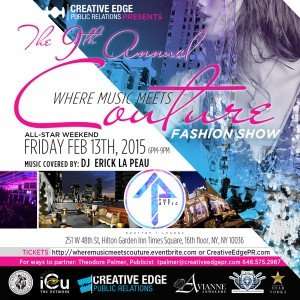 When celebrities and professional athletes unite for an altruistic evening of couture fashion and melodic tunes, it’s sure to be an evening of pure creative, mellifluous bliss. Creative Edge Public Relations Firm (CEPR) will host its 9th Annual ‘Where Music Meets Couture’ Fashion Show on Friday, February 13, 2015. The showcase is set to commence upon the onset of the NBA All-Star weekend and amid the height of the acclaimed New York Fashion Week. The swank affair will be held from 6-9pm at The Attic Rooftop Lounge in New York City, NY.

While the annual bash is in recognition of the firm’s success, including their prestigious list of CEPR clients and partners, it will more importantly serve as an excellent platform to bring relevance to the importance of supporting charities. Each year Creative Edge PR donates a portion of the showcase’s proceeds to a selected beneficiary (ies.) This year’s recipients will be the Chris Culliver Foundation, which supports the right and welfare of neglected animals, and the Walter Thurmond Foundation for Arts and Education, which aids in the improvement of youth literacy within inner-city schools.

Creative Edge Public Relations is a full-served public relations firm that specializes in media, marketing, and event planning. CEPR has managed to represent a prestigious client roster ranging from professional athletes, models, musicians, designers, nonprofits, and businesses. Since 2005, CEPR has produced countless high profile social events in partnership with powerful global brands, which has marked them as one of the top leading PR firms in the San Francisco Bay Area. CEPR prides itself on aligning not only with prominent client base, but also with charitable organizations that actively engage in charitable endeavors to improve surrounding communities. For more information, visithttp://www.creativeedgepr.com/

About the Walter Thurmond Foundation

Founded by New York Giant’, Walter Thurmond, The Walter Thurmond Foundation for Arts and Education seeks to empower inner-city youth by promoting programs in sports, fashion, film, and art. Their ultimate goal is to improve the overall health of education and produce future productive citizens. In addition, WTF has managed to established relationships with various non-profit organizations, such as the New York’s United Way and their Read NYC program, in order to aid children in inner-city schools. For more information, visit http://walterthurmondfoundation.org/