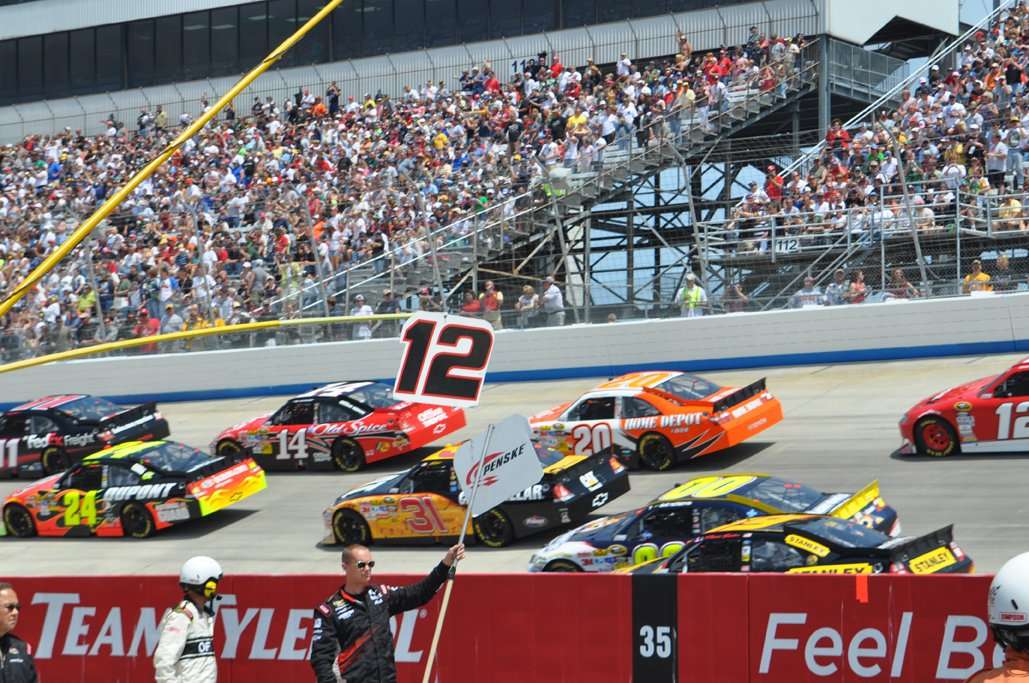 As a senior member of the Automotive Rhythms (AR) team, I’ve had the pleasure of experience some of the world’s great racetracks and the world’s greatest races. I’ve been to Indy, Sebring, and to the 24 Hours of LeMans.  But never to a NASCAR race. So when the good folks at Coyne Public Relations called with an invitation to the Autism Speaks 400 race at Dover International Speedway in nearby Dover, Delaware, I jumped in an Imola Yellow Audi S4 and hit the road for the short two hour trip from AR headquarters.

Getting in to the track was a breeze, thanks to outstanding coordination between track workers and Delaware’s finest.  Once credentialed, I headed over to the infield media center where I met Judy Kouba Dominick who works with agency that works with Shell Oil/Pennzoil team that sponsors Sprint Cup points leader Kevin Harvick of Richard Childress Racing.  Judy’s a veteran of racing, having spent many years with the Indy Racing League before jumping to NASCAR, where she’s spent nearly twenty years as a Communications Representative, traveling to 38 top tier racing events each year.

When I say “top tier,” NASCAR is divided into three divisions: Sprint Cup, Nationwide Cup and Outdoor Camping World Truck Series.  Think of the Sprint Cup as the NFL, and the Nationwide Cup as the Arena League, for purposes of distinguishing between the two.  Sprint has the top names in the business: Jimmie Johnson, Jeff Burton, Kevin Harvick, Juan Pablo Montoya and more.

My first NASCAR experience began with a thorough tour from Judy on intricate process that is NASCAR.  No folks, this is not bush league racing, with a bunch of good ol’ boys with big engines flying around an oval track.  This is big business, and it is taken very seriously by the folks who do the racing and by those who monitor the process.

For every one of the 38 races in the Sprint Cup, race weekend begins the same way:  Big rigs called “Haulers” assemble on Thursday in the order of the points the racers accumulate through winning or placing high in a race.  On Friday at 5:00 a.m., the gate open and the Haulers position themselves along the race venue infield according to standing position.  At 7:00 a.m., garages open and teams can begin to prep their cars for the race on Sunday.  Teams get 1.5 hours of practice before qualifying that occurs later on Friday afternoon.  On Saturday, with the race grid of 43 cars set through Friday’s qualifying session, teams get two, one hour practice sessions.

On Sunday morning, cars are inspected by NASCAR officials using a very strict set of criteria.  If your car does not pass muster at any of the seven inspection stations, you have to get it right within a certain time frame or you do not race.  For example, we visited a station that measures wheel track, camber and ride height.  The team from UPS was 1/16th of an inch too wide to qualify, so they had to do some quick adjusting to get within specs.  Another station visited measured the body from front to rear and side to side to ensure it was within NASCAR specs.  Another station checked to see if the engine was within spec, and another to see if the rear shocks were indeed shock absorbers.  If they were struts, it would give racers an unfair advantage by providing a higher rear ride height, which would raise the rear spoiler higher, resulting in more rear downforce for the team – a decided advantage when you are trying to stick to the track at nearly 175 mph.

When all official checks are done, the cars get a pink inspection sticker affixed to the upper windshield, and are positioned on the starting grid in the order they qualified.  It’s an amazing process to watch, and shows that NASCAR is as high tech as any of the other racing leagues like Indy and Formula One.

After touring the garage and inspection areas, I visited the Childress Racing Team trailer, where the team stores the backup car and spares for every bit that can go wrong on the track.  Neatly organized cabinets with pads, calipers, shocks, suspension arms, engines are readily accessible.  Go upstairs towards the front of the trailer, and you’ll find a leather appointed office for Childress star driver Kevin Harvick and his team.  I met Richard Childress prior to the race in front of his trailer. It was good to see Richard, as I visited his racing team headquarters in North Carolina during a Pennzoil event hosted there.

From there I sat in on the mandatory Driver’s Meeting, where all of the rules of the track are discussed (important as the final outcome can be decided on a rule infraction!) and safety while racing is gone over in detail.  It was great to see the new stars of NASCAR, as well as legendary  owners like Roger Penske and Jack Roush.

At 1:15 p.m., the National Anthem is sung, and it’s race time!  A flyover from the airmen at Dover AFB.  The cacophony from 43 V8 powered, open exhaust racers must be heard (and felt!) to be believed!  Days of Thunder for sure!!

I watched the bulk of the race atop a “War Wagon,” the big pit row boxes set up that house the race teams as they monitor the race.  NASCAR, like other race series, uses sophisticated telematics to monitor pretty much every parameter on the cars.  Tire pressure, engine oil temp and pressure, brake temperature and many other points show up on screens.  It’s a game of cat and mouse where victory can come in hundredths of a second, so you’d better be on your game when the checkered flag drops.  The War Wagon team is in constant contact with the driver, getting his input as well on the health and condition of the driver and the racecar.

After 400 one mile laps and caution flags, Kyle Busch was the winner. Though the crashes are spectacular at racetrack speeds, NASCAR is serious about safety, both for the drivers and for fans at the track.  Safety upgrades are constantly implemented, and the result is fewer serious injuries and fatalities in this dangerous sport.

NASCAR races are a family affair, with fun things to do for all family members.  If you’ve never attended a race, I encourage you to do so.  Visit www.nascar.com to find a track near you, buy yourself some ear plugs and enjoy the races.  The Autism Speaks 400 was loads of fun, and I learned a lot about NASCAR.  Money was raised for a good cause, and all in attendance enjoyed this exciting race day.