BEHIND THE SCENES WITH CAPTAIN AMERICA’S BLACK ON BLACK CORVETTE STINGRAY!!! 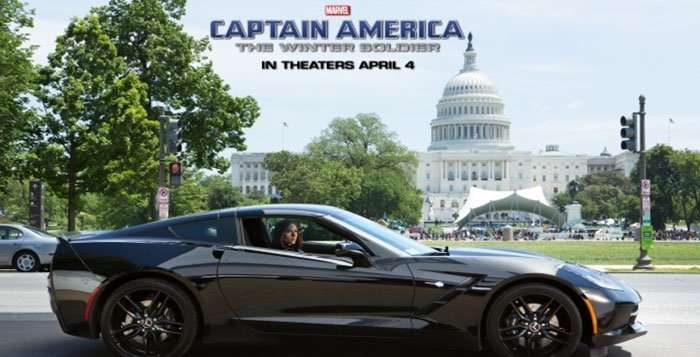 Auto buffs and action film fans are primed for “Captain America: The Winter Soldier” – the highly anticipated action film which stars Scarlett Johansson in the guise of “The Black Widow” behind the wheel of her namesake Corvette Stingray. Chris Evans, who plays the lead role of Captain America, is seen in the Black on Black Corvette Stingray with Johansson, and also drives a Blue Metallic Chevy Silverado 1500 in the film. Anthony Mackie, who assumes the role “Sam Wilson aka The Falcon” is seen in the film driving a 2014 Impala 2LT Sedan.

At the World Premiere in Hollywood’s El Capitan Theatre, Chris Evans, who stars as the character of Captain America – arrived in a 2015 Chevy Tahoe while Scarlett Johansson arrived in a Chevrolet Volt. The film opens in U.S. theaters on Friday, April 4

After the cataclysmic events in New York with The Avengers, Marvel’s “Captain America: The Winter Soldier” finds Steve Rogers, aka Captain America, living quietly in Washington, D.C. and trying to adjust to the modern world. But when a S.H.I.E.L.D. colleague comes under attack, Steve becomes embroiled in a web of intrigue that threatens to put the world at risk. Joining forces with Natasha Romanoff aka Black Widow, Captain America struggles to expose the ever-widening conspiracy while fighting off assailants sent to silence him at every turn. When the full scope of the villainous plot is revealed, Captain America and the Black Widow enlist the help of a new ally, the Falcon. However, they soon find themselves up against an unexpected and formidable enemy—the Winter Soldier.