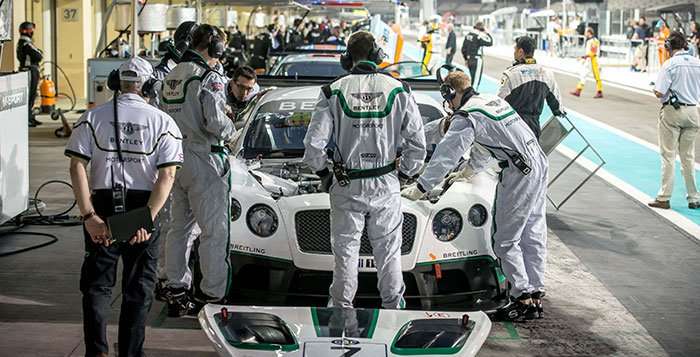 The new Bentley Continental GT3 racecar holds third position after the completion of the first half of the Gulf 12 Hours at Abu Dhabi, showing promising pace and impeccable reliability in true Bentley fashion. New Bentley Boys Steven Kane, Guy Smith and Andy Meyrick have driven two stints each so far, with Steven starting the race and Andy taking the six-hour checkered flag. Close battles with the Kessel Racing Ferrari and Gulf Racing McLaren have challenged the drivers, but all have driven with great skill and confidence in the new race package.

Bentley’s Director of Motorsport, Brian Gush, comments: “Six hours in and we’re very pleased with the result so far. Finishing the first half of the race in third position is testament to the hard work of the team and we’re now focused on getting the car ready for the night race, which holds a totally different set of challenges as the track temperature drops.”

•    The first GT3 car has been built by the Bentley motorsport team in conjunction with M-Sport. The Bentley GT3 team is led by Bentley Motorsport Chief Designer Graham Humphrys and M-Sport’s Chief Engineer, Christian Loriaux. M-Sport was originally formed in 1979, and in 1994 M-Sport won national rally titles in Italy, Portugal, the Middle East and Britain, the latter with founder Malcolm Wilson himself behind the wheel. Since 1996, M-Sport has run Ford’s WRC campaigns, including winning two FIA World Rally Championships in 2006 and 2007.

•    The Continental GT3 project is proud to be working with ExxonMobil, who have joined the team as a key sponsor. Using ExxonMobil’s proven success in motorsports and a track record of helping bring home championships, Bentley’s V8 race engine will be filled with Mobil 1™ synthetic motor oil, to ensure maximum engine protection and performance in the grueling environment of endurance racing.

•    In 2002, Bentley launched the Continental GT, then the most powerful Bentley ever built. Breitling lent the revolutionary new luxury car an extra personal touch, by participating in the design of the technical instruments and, importantly, creating the onboard clock. Following a successful collaboration during Bentley’s renowned Le Mans campaign from 2001 to 2003, Breitling has returned as a key sponsor of the Continental GT3 project.

•    Bentley Motors employs around 4,000 people in Crewe which is home to all its operations including design, R&D, engineering and production. The combination of fine craftsmanship, using skills that have been handed down through generations, alongside engineering expertise and cutting-edge technology is unique to UK luxury vehicle manufacturers such as Bentley. It is also an example of high-value British manufacturing at its best.