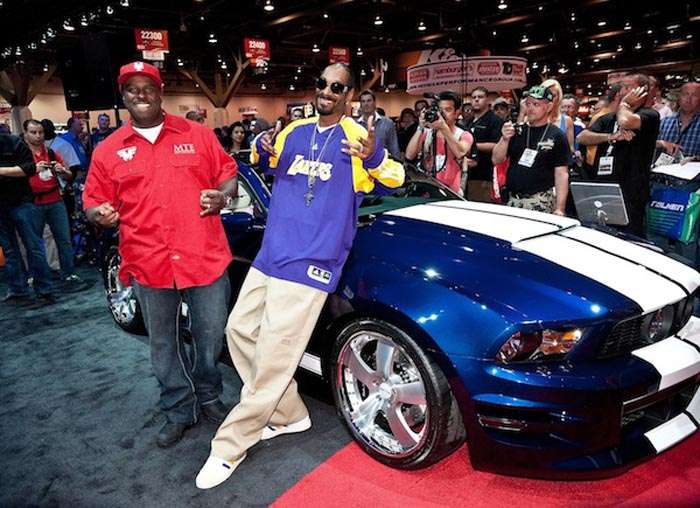 “So much is going right with that blue oval these days,” proclaimed Jim Farley, Group Vice President, Global Marketing, Sales and Service for Ford at the November 2 press conference for SEMA 2010. No doubt bolstered by October sales numbers that were up 19 percent from last year as well as the relief of hedging the right bet on the comeback power of innovation and creativity over bailout money, Ford management had many reasons to smile. Chief among them was the Mustang, a SEMA favorite.

Introduced by Jamie Allison, Director, Ford America Motorsports as “the face of drifting,” among other things, Vaughn Gitten, Jr., who finished first at the Formula D Round 1, Streets of Long Beach competition, spoke highly of not just his achievements but the Mustang’s performance on all levels.  “Basically I have a street Mustang, the 2011 5.0, and I go out and have the same fun, a little bit toned down, but the same fun in my street car as I do on the track,” he told the crowd. “It’s pretty incredible for Ford to be able to build a car that can handle the abuse that I put it through so hats off to everybody at Ford for building some awesome products.”

Also on hand was Ken Block, who has made his mark in rally racing, becoming the third American in almost 20 years to earn points in the WRC. This year, Block began driving the Monster/Ford Racing Focus RS WRC 08. Gymkhana is another area in which Block excels and, for that sport, Block adapted the Fiesta. “I was very lucky this year to have the opportunity to build a new gymkhana car from the ground up and my partnership with Ford is just a great example of what it is to bring a great product like the Fiesta to a program like mine and develop something sort of revolutionary for that type of driving,” Block shared. “It’s just been an incredible piece of machinery for me to go out and do what I love to do.”

The accolades for the Fiesta didn’t stop as Tanner Foust, the Formula D champion in both 2007 and 2008 who has also been a stunt driver for such great racing films as The Fast and the Furious Tokyo Drift, also chimed in. Foust, who won gold in both Rally Car Racing and Rally Car Super Rally at the X Games XVI in Los Angeles this past summer in a Fiesta, likened the Rockstar Fiesta he drives to “sitting on a wild animal kinda and trying to calm the car down.” Foust also added that “It’s really been an amazing thing in my career to drive that. Most definitely, the fastest car I’ve ever driven.”

In addition to announcing future racing prospects for a new model of the Ford Focus and treating SEMA attendees, journalists included, to riding shotgun with Gitten and Block as they drifted out on the course outside the building, the Funkmaster Flex customized Kona blue Mustang for Snoop Dogg was another highlight. As Snoop appeared in the Ford booth to see his car and to partake in an autograph session with Funkmaster Flex, he smiled the broadest when Flex pointed out the white Snoop Dogg tag located squarely on every wheel of the car.
Flex, who continues to enjoy a long-term partnership with Ford, shared his own customized 2011 Ford Explorer. The Land Rover-inspired vehicle got an instant “this right here” approval from Snoop. Later, at a private mixer at the Caramel Lounge in the Bellagio, Flex explained his success in the car customization industry and particularly with Ford quite simply. “I just try to do what comes naturally and keep good people around,” he shared.