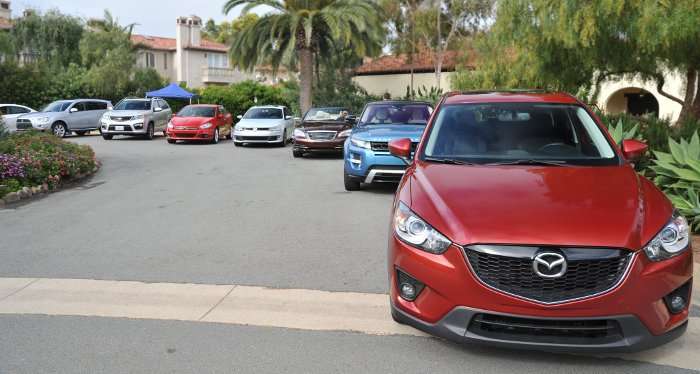 The second installment of Heels & Wheels recently took place in the land of my childhood, San Diego, CA. Designed by Christine Overstreet, President and CEO of Overstreet Events & PR, the purpose of the ride and drive is for women in the automotive industry to come together to talk shop. Over 40 female journalists, auto executives, and manufacturer representatives attended the second annual event which was held at the lush resort Estancia La Jolla Hotel & Spa (www.estancialajolla.com).

Similar to last year, the conference provided journalists with the opportunity to get behind the wheel of vehicles provided by sponsoring partners Buick, Cadillac, Chrysler, Dodge, Hyundai, Jaguar, Kia, Land Rover, Mazda, Mitsubishi and VW. This time however, before the multiple test drive opportunities began, Heels & Wheels kicked off with a reception hosted by Kelly Blue Book to educate attendees on key insights regarding the female automotive consumer such as:

We finished off the first day with a delicious dinner and a presentation by the Heels & Wheels project management team where we were given some interesting stats, including:

Heels & Wheels is centered around the female automotive journalists in attendance so they can experience various auto brands with the ability of comparing them side by side. Because there are certain things that appeal most to the female driver including cargo space, rear passenger leg room, safety features, compartments, etc. The vehicle models on hand this year were Buick’s Verano, Cadillac’s XTS, Dodge’s Dart, Hyundai’s Azera, Jaguar’s XJL, Kia’s Sorento SX, Range Rover’s Evoque, the Mazda CX-5, Mitsubishi’s Outlander GT and VW’s Jetta GLI.

Although I didn’t have the opportunity to drive all of the cars, my personal favorites were:

Certain brands do a better job than others to play on female emotions. Fiat is one of them and I wish an Abarth was present. Infiniti and Nissan have done superior jobs! I don’t even think about Mitsubishi, Buick or Mazda when it comes to car shopping.

Other event highlights included a breakfast discussion with LaShirl Turner, Head of Advance Color and Materials at Chrysler, who informed us that there’s an entire process that goes on behind the scenes when it comes to designing the look and feel of a vehicle. Next up was a panel discussion that featured the Location General Manager of CarMax Irvine, CA Audrey Larsh, one of just a handful of women in the mostly male dominated dealership world. Last but not least was a wine tasting and pairing hosted by Buick, where I discovered The Show’s 2010 Malbec from Mendoza Argentina, a tasty new addition to add to my aspiring wine collection.