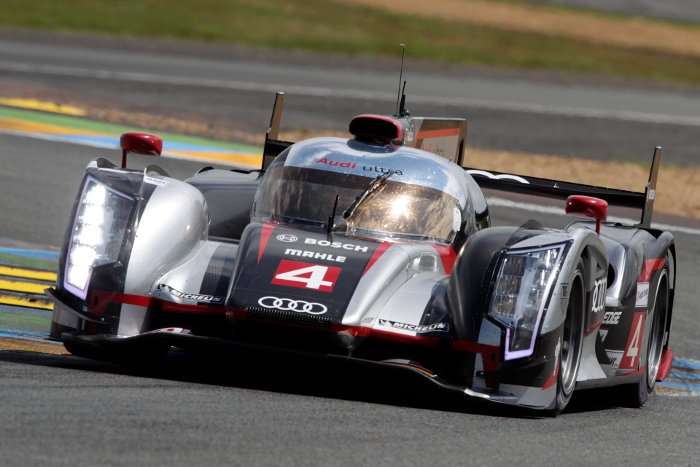 AUDI AG has achieved another technological milestone in motorsport. On the 80th running of the famous Le Mans 24 Hours, a vehicle with hybrid drive – the Audi R18 e-tron quattro – has triumphed for the first time.

Around 200,000 spectators witnessed a fascinating race with the drama and incidents that are typical for Le Mans plus an impressive demonstration of “Vorsprung durch Technik.” The four Audi R18 cars from Audi Sport Team Joest were the quickest and most reliable vehicles and after 24 hours occupied positions one, two, three and five.

“By achieving this further success at the world’s most important endurance race our engineers demonstrated their high technological expertise in a particularly impressive way,” commented Rupert Stadler, Chairman of the Board of Management of AUDI AG, who personally watched the race on location. “With the e-tron quattro in combination with ultra lightweight design, we put a completely new technology on the grid and immediately won with it – this cannot be taken for granted by any means, particularly here at Le Mans. This weekend again showed the type of things that can happen in this race and how important perfect preparation is.”

All four Audi R18 cars had the chance to clinch what amounted to the brand’s eleventh Le Mans victory in total. After 378 laps, last year’s winners Marcel Fässler (CH), André Lotterer (D) and Benoît Tréluyer (F) at the wheel of the Audi R18 e-tron quattro designated as car number “1” were again the front runners. Dindo Capello (I), Tom Kristensen (DK) and Allan McNish (GB) as the runners-up caused the all-wheel drive of the future in which the conventional drive system is intelligently combined with an electrically driven axle to record a one-two result. Audi is already testing this technology in which the drive shaft is replaced by electric cables for use in production vehicles.

Operating at the rear of all four Audi R18 cars was the latest evolution of the compact V6 TDI engine with VTG mono turbocharger that was used at Le Mans for the first time in 2011. The new ultra-light transmission with a carbon fiber housing – a novelty in a Le Mans sports car – held up to the Le Mans endurance test covering a distance of 5.151 kilometers in all four vehicles without any problems as well. Like quatto all-wheel drive, ultra-lightweight design is a core competency of the company.

The two Audi R18 e-tron quattro cars embody these two technologies in a particularly extreme form – and they were the protagonists at the 80th edition of the endurance classic right from the beginning. They only had to relinquish the leading position to one of the two Toyota hybrid vehicles once for a few laps on Saturday night. After the early retirements of their fiercest rivals the two R18 e-tron quattro cars fought a thrilling duel for victory throughout the night until noon on Sunday during which the lead changed several times and the two diesel hybrid sports cars were often separated by just a few seconds.

An accident by Allan McNish in the fast Porsche corners less than three hours before the finish caused the preliminary decision. Audi Sport Team Joest managed to repair the heavy damage at the front of the R18 e-tron quattro in record time and to thus save second place. In the early phase, car number “2” had lost nearly a lap after a massive piece of rubber pick-up had gotten stuck in the area of the rear suspension.

The winning car with chassis number R18-208H nicknamed “Electra” was not spared from incidents either. Marcel Fässler touched the track barrier twice on Saturday morning: the first time after spinning at high speed and the second time when he had to evade a GT vehicle that was standing sideways in the Mulsanne corner. Benoît Tréluyer, who was suffering from a severe cold which he had caught on Friday while participating in the drivers’ parade in the rain in the center of Le Mans, spun once at the entrance to the pit lane.

The third-placed Audi R18 ultra – car number “4” – lost a lap right at the beginning of the race due to a check of the rear suspension. On late Sunday morning a gear got stuck twice which the driver was able to correct each time by switching the ignition on and off. Afterward the R18 was running perfectly again and allowed Marco Bonanomi and Oliver Jarvis to clinch the first podium place at Le Mans together with Mike Rockenfeller, who returned to the podium a year after his serious accident.

Two nearly identical slips caused the Audi R18 ultra #3 in which Loïc Duval set the fastest lap of the race to lose its chance for victory. On Saturday night, Romain Dumas in the first chicane while lapping a GT vehicle hit the dirty part of the track and slid against the track barrier. The same mishap occurred to Marc Gené on Sunday noon. In both cases, Audi Sport Team Joest managed to repair the R18 in an extremely short period of time. In total, though, twelve laps were lost.

“This was a race of the kind you can arguably experience only at Le Mans,” said Head of Audi Motorsport Dr. Wolfgang Ullrich after his four Audi R18 cars had crossed the finish line. “You should never rejoice too early at Le Mans, which was obvious again especially on Sunday noon. The whole world was already talking about a one-two-three-four victory and all of a sudden two of our cars had accidents almost simultaneously. That the squad repeatedly managed to repair the cars so quickly after the slips clearly speaks for Audi Sport Team Joest that can simply be banked on at Le Mans. On the whole, I can only take my hat off to the entire squad of Audi Sport that worked extremely hard for a year to make this triumph possible. It was a very big challenge to develop a hybrid car in such a short time that is quick and able to hold up for 24 hours. The fact that, as in 2001 with the TFSI engine and in 2006 with the TDI, we managed to be successful right on the first run simply proves the level of technological expertise that is available at Audi. This is a great day for Audi Sport, for Audi and for the e-tron quattro.”

With its eleventh victory at Le Mans, Audi has extended its lead in the World Endurance Championship. Dindo Capello, Tom Kristensen and Allan McNish as the runners-up recaptured the lead in the drivers’ world championship.