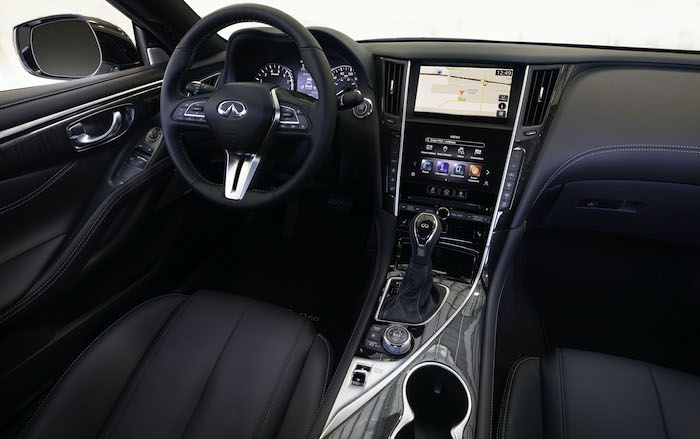 INFINITI has developed a new-generation infotainment system for its key 2020 models. With the 2020 model year updates for Q50, Q60, QX50 and the flagship QX80, owners in selected regions will have access to an array of new functionality. The HD twin-screen system, which keeps the name ‘INFINITI InTouch’, will improve the driving experience and keep motorists better connected while on the road.

Eric Rigaux, General Manager of Product Strategy & Planning for INFINITI Motor Company, said: “Connectivity on the move is more important to drivers than ever – it allows them to keep up-to-date with the latest traffic information, while passengers can stream, surf, video call and more at their leisure. Having listened to feedback from our customers, we have vastly improved the system’s features, intuitive use and functionality. It was important for us to offer both Apple CarPlay and Android Auto as standard in our new models to allow the majority of drivers to connect their smartphones to the car. The latest INFINITI InTouch with dual screens makes in-car connectivity easy and informative, meaning drivers and passengers can enjoy the benefits intuitively while driving.”

With INFINITI InTouch, vehicles with Navigation become a Wi-Fi hotspot, with up to seven devices able to connect at any one time, meaning all passengers can stay online without using up their data allowance on a personal device.

Apple CarPlay and Android Auto will feature as standard on 2020 INFINITI models that adopt the updated system. Users can connect compatible smartphone via USB to easily access a range of apps and selected smartphone features on the car’s infotainment touchscreen, including making calls, sending and receiving messages, navigation and listening to music. For Apple users it’s easier than ever to enjoy all the features of their iPhone while keeping their hands on the steering wheel with Siri Eyes Free. Drivers can use voice commands to control Siri Hands Free and operate their smartphone, meaning they don’t have to look at the touchscreen to change a track, or make a phone call.

For models that feature INFINITI InTouch with Navigation, functionality expands to incorporate 3D maps, Street and satellite view imagery and Destinations by Google, making it easier to select and identify points of interest.

INFINITI InTouch also features an improved interface with the adoption of a new, faster processor for an enhanced user experience for drivers. The new Bluetooth module allows for easier pairing, prioritized connection and higher stability between the user’s smartphone and the vehicle, while the newly adopted HD microphone delivers better voice quality during phone calls and voice commands. With the Bluetooth connection manager, drivers can now also select their favorite device from the multiple phones paired with their car – each time the car starts, their phone is prioritized for connection.