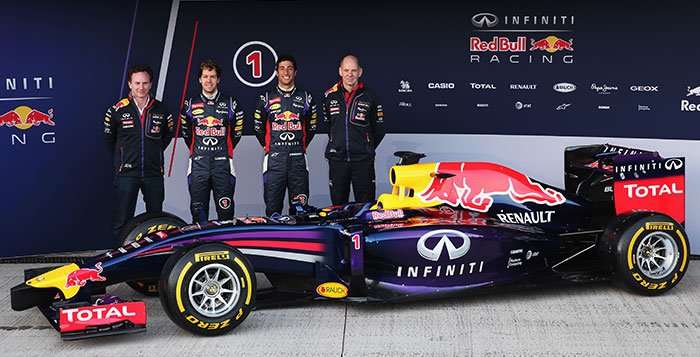 Today the RB10 was revealed, the challenger for the 2014 Formula One World Championship and the first interpretation of F1’s radical new technical regulations. Unveiled in the pit lane at the Jerez Circuit ahead of the first day of testing, the RB10 is powered by the Renault Energy F1-2014.

As a team, Infiniti Red Bull Racing has enjoyed hard-fought success in recent years winning the last four Drivers’ and Constructors’ titles. Now the game changes. Due to the new regulations, the RB10 has little in common with its predecessors.

Regulation changes, design changes and in particular the big discussion revolving around the new car noses in Formula One for 2014: We hear from Adrian ahead of the big pre-season roll out in Jerez.

Q1: What are the two key regulation changes for this season?

Newey: This season we have two big regulation changes, the first one concerning the engine. We’ve gone from the normally aspirated 18000 rpm V8 to a turbo charged 1.6-liter V6 with much higher electrical content – KERS in layman’s terms – and very strict fuel consumption. So, we not only have a limit of 100kgs of fuel for the race but we have a maximum flow rate. For reference, the previous engines were using 160kg, so it’s a big reduction in fuel.

That of course means there will be a lot of strategy in the race. At most of the races we anticipate will be fuel capacity limited, so we will have to save fuel during the race. That will mean a different driving style, where you are compromising lap time at certain points to save fuel. The question then is how you use your remaining fuel? Do you go out quick at the start and then save fuel, or save fuel and sprint at the end – all that will come in to play.

The next major change is with the aerodynamics. What sounds like quite a small change, a 75mm reduction in the width of the front wing on each side, has had a big aerodynamic effect. Previously, the front wing end plate allowed us to put the flow off the tip of the wing outside of the front wheel, but now the front wing end is right in front of the wheel – about the worst possible place. It’s not inside or outside, so that means the majority of the flow now stagnates in front of the front wheel. A little bit finds its way outside and the rest comes inside, and in doing so makes quite a mess. The front wheel wake becomes much bigger and that causes all sorts of problems downstream as you approach the side pod and diffuser.

On top of that you have a lowered nose [lowered to 185mm from 550mm]. What you end up is with almost two noses – one that is the main bulk of the nose to the minimum side view height and then almost a bulb sticking out from that. I think there will be a few ungainly noses, which is a shame. To me the aesthetics of an F1 car are important: They should look good and not many owners of these noses could really love them.

Q2: How big a challenge has it been to get the RB10 ready in time?

Newey: While it appeared that last season was easy for us in terms of the number of wins and points we had at the end of the year, at the critical area around August it was a very tight battle. Mercedes seemed to have good impetus. Ferrari and Fernando had had a very good start to the season and couldn’t be ignored, so we were feeling far from comfortable.

We put a lot into the development of RB9 through June, July and September and inevitably that meant compromises. We only have limited recourses and while we were developing RB9 it meant that work wasn’t going into RB10. However, we felt we needed to do that to try to win the championship and then handle the pressure of timescales that resulted from that.

I think time really has been our biggest battle. We haven’t had the time we would have liked to do the research on the background before committing to the fundamental hardware of monocoque and gearbox case.

Q3: Christian recently raised concerns about reliability across the grid in the opening races? How long do you think it will take for the racing to settle down?
Newey: The early races could see quite a few upsets in the order. Reliability is naturally the most obvious concern. The power unit is tremendously complicated and while road car manufacturers make some quite complicated hybrid cars, those cars have had the luxury of years of development before they come to market. We’ve got three tests, around 12 days, and then we’re off to the first race. It’s a very compressed development schedule and that can bring a lot of problems, so reliability will be an issue.

Q4: You have a multiple champion on one side of the garage and a much less experienced guy on the other. The team obviously rates Daniel very highly. How would you describe Daniel’s abilities as he embarks on his first season with the team?

Newey: I think Daniel, through the junior formulae and at STR, has shown a good pace. He’s a naturally fast driver. Obviously now it’s a matter of the team and driver getting to know each other and working together, seeing how his feedback is. Hopefully it will complement Seb’s, as Mark did in the previous seasons. It’s a slight journey into the unknown as, although he’s been a member of the Red Bull family for seven years, he’s been in a different team, so we don’t know him that well. Hopefully it will be good and I’m looking forward to it.

Q5: Have you enjoyed designing the RB10?

Newey: Yes I have, though it’s been a lot of pressure. It’s been a lot of long hours for everyone at the factory. It was a very compressed design schedule as we chose to continue to develop the RB9. That really put pressure on for all of us to hit the deadlines. But pressure can be a good thing; it can be stimulating. It doesn’t always seem so when you’re leaving the factory at some unsocial hour in the evening then gulping down supper and going to bed, but sometimes creativity comes out of those high pressure environments. It’s certainly been busy and now it’s that time of trepidation where we wait to see if there are nasty shocks and to see what everyone else been up to over