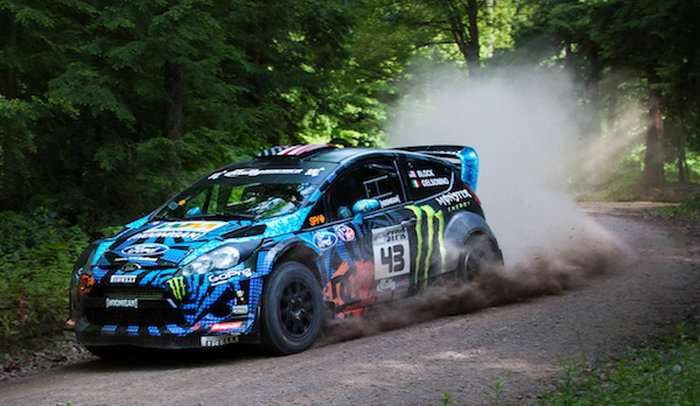 Hoonigan Racing’s Ken Block and Alex Gelsomino took their first overall win of the season at the Susquehannock Trail Performance Rally (STPR) – round four of the 2013 Rally America National Championship – held on May 31-June 1 in Wellsboro, Pennsylvania. The victory marks the duo’s second STPR Rally overall win and it comes at a critical time when Block needed a victory to close the gap to current Rally America National Championship points leader, David Higgins and Craig Drew from Subaru Rally Team USA.

Block and Gelsomino were able to win 12 of 16 STPR Rally stages in their 2012 Ford Fiesta H.F.H.V. without much of the mechanical problems that have plagued the team since the beginning of the season.

“The weekend went really well,” said Block, “The first three (Rally America) events of the year went really horrible for me. I am really happy to come here at STPR and have an event with some good luck.”

After winning the last two Rally America rounds, Subaru Rally Team USA quickly lost ground when they broke a steering arm on stage 3 that knocked them out of contention. The team returned to competition on Saturday using SuperRally rules, which allows a team to compete for Championship points after a time penalty, and began Saturday in the 21st position and drove outright to salvage a third place overall podium finish.

Higgins also benefited when FY Racing’s Adam Yeoman and Jordan Schulze’s engine seized on stage 10. At that time Yeoman held second overall and appeared to be holding the position until the drastic engine failure.

David Sterckx and Karen Jankowski’s overall podium paralleled their hard fought Super Production Class victory. Sterckx overcame a number of mechanical problems to keep adding to his STPR lead and as a result Sterckx will now assume the top of the Super Production Class standings from Evan Cline who skipped STPR in favor of attending the next round.

“It was a good win especially after the last year we had,” said Sterckx “We also started this season really bad, but after the second event we got better and now have won two events in a row. We have to keep it this way to win the Championship.”

In only their second Rally America event Australians Brendan Reeves and Rhianon Smyth won the Two-Wheel Drive (2WD) category in their 2012 Ford Fiesta R2 despite Reeves dealing with a cold that sapped his stamina. Reeves led the category from the beginning and stayed just ahead of Scion Racing’s Andrew Comrie-Picard and Jeremy Wimpey. Reeves impressively finished fourth overall besting his fifth overall finish at the Oregon Trail Rally.

“The car performed excellent and we were trying to push to keep third place overall, but Higgins had to spoil that fun,” said Reeves. “It’s a great win and we’ll see if we can keep racing in Rally America this year.”

James Robinson and Jordan Guitar rebounded from not finishing at the Oregon Trail Rally to take the B-Spec Championship round win at STPR. Robinson keeps Honda on top of the B-Spec Manufacturers’ Championship while leading his B-Spec category.

Ford maintains third place in the overall Manufacturers’ Championship, but gained some ground on Subaru, which leads both the overall and the Super Production categories. Ford will overtake Scion for the Two-Wheel Drive category in the Manufacturers’ race with this STPR win.