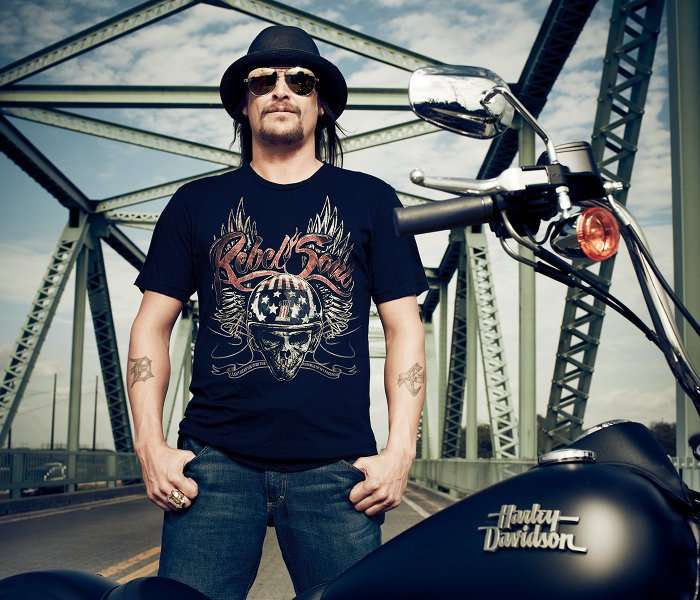 In its most thrilling and globally epic anniversary celebration to date, Harley-Davidson today announced an exclusive partnership with legendary musician and ‘American Badass’ Kid Rock, including a Saturday night performance for the company’s 110th Anniversary celebration in Milwaukee over this Labor Day weekend.

The first-of-its-kind partnership brings together two legendary American rebels and names Harley-Davidson as a title sponsor of Kid Rock’s Rebel Soul tour, which kicks off Feb. 2, 2013, in Kansas City. Harley-Davidson plans to offer fans unique experiences at each of the 60 planned stops during the Rebel Soul tour. The tour sponsorship is just one aspect of the overarching relationship, which will extend from concerts to retail promotions.

The final stop on the tour is Saturday, Aug. 31, 2013, when Kid Rock rolls into Milwaukee, Harley-Davidson’s hometown, to party with thousands of his fellow riders. Kid Rock will play a ticketed show at the Marcus Amphitheater, which is located on the south end of Milwaukee’s Henry Maier Festival Park (Summerfest Grounds). Fans who purchase 110thAnniversary ticket packages – currently available at www.ticketmaster.com – will have an opportunity to purchase tickets for Kid Rock’s 110th Anniversary performance before they go on public sale later this spring. Kid Rock is one of three headliners Harley-Davidson plans to announce for the 110th Anniversary Celebration in Milwaukee – the other entertainment will be announced later this spring.

“What’s not to love about Harley?” said Kid Rock. “They are the backbone of American culture, the flagship American brand. I am honored and excited to partner with this legendary icon that has helped to define American freedom at home and abroad. In 110 years no one has done a better job of representing America – there is NOTHING that screams America like Harley-Davidson.”

Also, at every Rebel Soul tour stop this year, Harley-Davidson will offer one winner the chance to join Kid Rock’s Rebel Soul band and rock on stage for one song during that night’s performance. Fans simply have to find the Harley-Davidson Display Area at each venue to register.

Harley-Davidson is also raising the stakes with a national promotion where one fan will win a once-in-a-lifetime experience including a factory-customized Harley-Davidson motorcycle and the opportunity to rock alongside Kid Rock on stage during the 110th Anniversary show in Milwaukee. Fans can enter to win the national promotion at www.h-d.com/kidrock beginning Feb. 2. The winner’s VIP trip to the 110th Anniversary will also include a meet-and-greet and photo shoot with Kid Rock.

“Kid Rock puts on a great show and embodies a lot of what Harley-Davidson and our fans stand for – freedom, independence, self-expression and the rebel spirit,” said Harley-Davidson Chief Marketing Officer Mark-Hans Richer. “We’re excited to take an unprecedented ride with him during the Rebel Soul tour.”

Harley-Davidson plans to announce ticket sales information for the Kid Rock performance in Milwaukee in the coming weeks, along with additional details related to the 110thAnniversary. Event dates and tickets for Kid Rock’s Rebel Soul concert tour are available at www.ticketmaster.com.