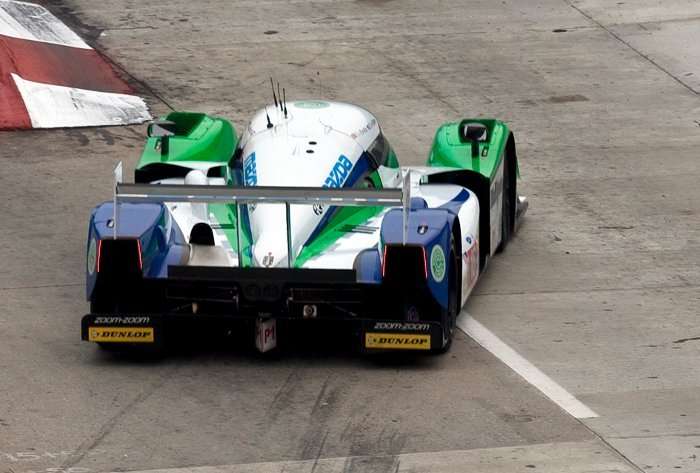 It was absolutely amazing to see how the streets of downtown Baltimore were transformed into a motorsports park for 90,000 spectators looking for action from a cadre of popular races running the 2-mile, 12-turn circuit. Weekend festivities included two USF2000 races, American Le Mans Series (ALMS), Star Mazda, Indy Lights, and the IZOD IndyCar Series. Racing, concerts, car shows, and good food centered within the Inner Harbor at Camden Yards in Maryland made for an exciting Labor Day Weekend!

Please discard any lingering doubts you’ve had about Mazda as it relates to the motorsports world. Their MAZDASPEED Motorsports arm includes an impressive racing background and the corresponding experience needed for a successful racing formula. Mazda continues to be the manufacturer of the most road-raced vehicles in America, and outnumbers Toyota, Honda, and Nissan combined. Since 2006, the Japanese brand has supported 20 drivers who’ve received awards 26 times as part of the MAZDASPEED Motorsports Development Ladder. Key alliances with Mazda Raceway at Laguna Seca, IndyCar, Skip Barber, and Cooper Tires extends their educational reach to a group of young and inspiring drivers endeavoring to progress to the next level. MAZDASPEED Motorsports also enjoys relationships with noted public figures such as Patrick Dempsey and his Dempsey Racing Grand-Am team as well as C.J. Wilson Racing, which is co-owned by C.J. Wilson of the Texas Rangers.

Friday activities consisted primarily of practice and qualifications. USF2000 #1, the first race of Saturday afternoon, was won by 20-year-old Wayne Boyd from Belfast, Ireland. USF2000, powered by Mazda, is a racing development circuit and platform for young drivers to advance to the Indy Lights program. From there they move to IndyCar or wherever their skills can take them. USF2000 vehicles are single-seat, open-wheel, open-cockpit cars powered by Mazda’s racing-tuned MZR 2-liter, 4-cylinder engine, which is capable of propelling the vehicle at speeds up to 150 mph while running on 13” slick or rain tires. The 12-race USF2000 season consists of two oval races, two street circuits (such as the Baltimore Grand Prix) and three permanent road courses, for a variety of scenarios and environments to hone a driver’s skills behind the wheel. These youngsters are mature, well spoken and they certainly know how to address the media. Shannon McIntosh, a 22-year-old from Ohio was one of the most compelling drivers while 16-year-old Zach Veach spends his free time writing books and developing “don’t text and drive” apps! However, Finland’s Petri Suvanto ran away with the USF2000 season championship by placing second in the race. Mazda will reward him with a scholarship package to advance to the Star Mazda Championship series in the 2012 season.

Shortly after the USF2000 #1 event, Mazda took the checkered flag with a one-two punch in the 3.15-hour ALMS race. Humaid Al Masaood and Steven Kane claimed the victory in their #20 Oryx Dyson Racing entry. Chris Dyson and Guy Smith followed, placing second with their #16 G-OIL ModSpace/Construct Corps Lola Mazda. Rob Dyson summed up the weekend’s experience. “We are fortunate to race in a number of great markets through out the year and I have to say that the fan support here in Baltimore ranks as an A plus. This surpasses any first year event I have ever been to. Even the tops of the skyscrapers were filled with people watching the race. The number of enthusiastic fans that showed up today, and to feel that kind of energy – really honors us. The Charm City has lived up to its reputation.”

Earlier this morning, Andretti Autosport’s Spencer Pigot finished first to claim his third win of the season in USF2000 #2. Pigot held off challenges from USF2000 #1 winner Wayne Boyd and then Petri Suvanto to cross the finish line only .314 seconds ahead of the Finnish driver.

This afternoon, the 2011 Star Mazda Championship, presented by Goodyear, was held even after only six laps of practice on Friday. Tristan Vautier of JDC Motorsports won his fourth race of the season – all from the pole. Andretti Autosport’s driver, Sage Karam, finished second, just a half second behind Vautier. “This turned out to be a very important race and it looks good for the championship, but we must be careful that we do not take anything for granted. I am very thankful to the JDC team and my engineer Rick Cameron for a great car today and all season long,” said Vautier. Today was round 10 of an 11-race season, with round 12’s season finale being settled during the America Le Mans series weekend at Mazda Raceway at Laguna Seca on Sept. 16-18.

With 21 years of Star Mazda Competition, the series is the longest running road-racing series in America, which figures as a major accomplishment for MAZDASPEED Motorsports. By the way, Will Power won the IndyCar race, which was the main event of the Baltimore Grand Prix.