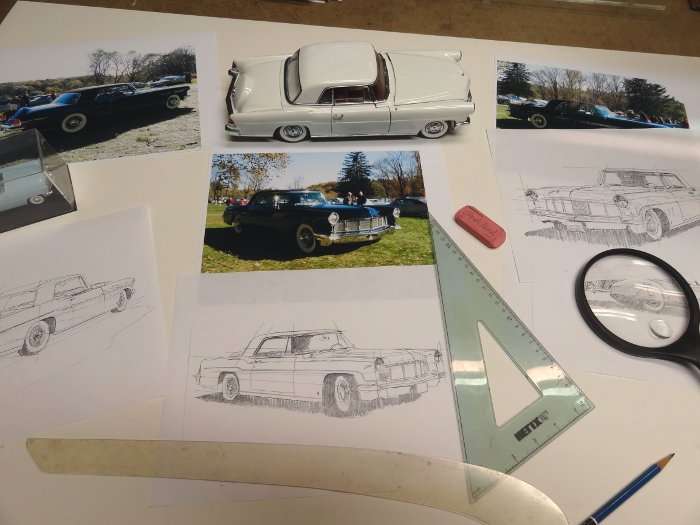 When Edsel B. Ford II came upon the 1956 Lincoln Continental MK II last year, he admired the long lines and elegant custom styling of the automobile, but he didn’t immediately recognize it. Imagine his surprise when he learned the car had, in fact, belonged to his mother, Anne, as evidenced by the original owner’s manual inscribed with her name.

In all fairness, Edsel was just 8 years old when his father, Henry Ford II, ordered the car for his wife, who drove the luxury vehicle for about two years before selling it to her personal assistant for use as a daily driver.

The car, now impeccably restored, will be among the many pre- and postwar custom-bodied Lincolns featured at the 63rd Pebble Beach Concours d’Elegance on August 18 at Pebble Beach Resorts. It also stars on this year’s commemorative Pebble Beach Concours poster, printed from an original painting created by Ken Eberts, founder and president of the Automotive Fine Arts Society. Also depicted on the Concours poster is the 1939 Lincoln Zephyr created for Edsel’s grandfather, Edsel Bryant Ford, who served as president of Ford Motor Company from 1919 through 1943, bringing both style and finesse to the Lincoln marque.

The 1956 Lincoln currently belongs to Rick Schmidt, whose father Jim discovered the dilapidated vehicle in a classified ad. Had they not already owned a 1956 metallic mint green MK II that had belonged to Benson Ford, and a 1956 sapphire blue metallic MK II that had belonged to William Clay Ford Sr.–both brothers of Henry Ford II–the Schmidts would not have taken on the project.

“It seemed only right to have the trio of 1956 MK IIs originally owned by the Ford brothers,” says Rick, “so we bought the car and dove into the project, taking on our biggest restoration challenge yet. It is now a stunning car, and we’re thrilled to bring it to Pebble Beach.”

Purchased through Ford’s central office, with the names of Mr. and Mrs. Henry Ford II on the original factory production order, the car cost $10,000, the price of a house in 1956. The only MK II ordered with a Hartz cloth roof, the interior of the car is upholstered in elegant gray wool broadcloth with red piping and contrasting black leather on the door panels and dash. The car also is unique in that it was finished without a hood ornament at Anne’s request.

“My mother was a very sophisticated woman and her MK II definitely mirrored her personality,” says Edsel. “I am pleased to announce the Edsel & Eleanor Ford House is bringing a never-seen-before special Lincoln to the Pebble Beach Concours for display. I look forward to that–and to seeing my mother’s car again. It is a beautiful Continental, and I am honored Rick Schmidt is bringing it out.”

Portraying the Continental on canvas has been a wonderful trip through time, says Eberts: “In 1955, at 12 years of age, when the 1956 Continental MK II debuted, I was excited. In 1965, as a designer in the Lincoln Studio, I was inspired by the MK II. And today, in creating the poster art for the Pebble Beach Concours d’Elegance, I am proud to be portraying this car’s classically simple, subtly sculptured, impeccable design. With just the right amount of jewelry in the form of chrome, it was a statement of exquisite taste and elegance.”

Eberts’ final poster artwork will be featured at the Automotive Fine Arts Society exhibit at Pebble Beach that is sponsored by the Lincoln Motor Company and held in tandem with the 63rd Pebble Beach Concours d’Elegance on Sunday, August 18.

Information on all of the events of Pebble Beach Automotive Week and tickets for the Pebble Beach Concours d’Elegance are available at www.pebblebeachconcours.net.