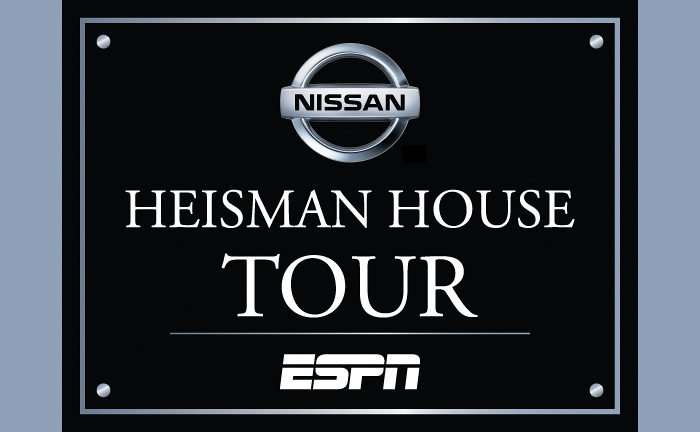 For the third straight year, Nissan and ESPN are giving viewers the chance to imagine what it might be like if the winners of college football’s highest individual honor – the Heisman Trophy – lived together in the same house. The Nissan Heisman House returns in time for the start of the college football season and stars 13 Heisman trophy winners, an interactive website and a real-life Heisman House Tour that will travel to college campuses throughout the season. The website and vignettes debut on August 31 prior to ESPN’s Saturday Night Football game on ABC, followed by other ESPN platforms throughout the season.

The Heisman House supports Nissan’s long-running sponsorship of the Heisman Memorial Trophy Award. Developed in collaboration with TBWAChiatDay, OMD and ESPN’s in-house creative team, CreativeWorks, the concept revolves around the online platform, www.NissanHeismanHouse.com, where fans can vote for the next Heisman Trophy winner.

Visitors can once again tour the house, learn about current members and watch behind-the-scenes footage and interviews filmed during the campaign production. Eight of Nissan’s highest rated vehicles, including the 2014 Altima, Sentra and the all-new Versa Note, are integrated into the site and the campaign.

“This year we’ve added some entertaining new elements as we begin another exciting season in support of the good works of the Heisman Trophy Trust,” said Jon Brancheau, vice president, Marketing, Nissan North America, Inc. “With the online voting for this season’s top Heisman candidates, combined with the fun of seeing past Heisman winners interact with each other, we’re going to capture the attention of sports fans across the country.”

“The sustainability of the original concept with fresh scripts, new athletes and ability to the showcase new vehicles year over year is a tremendous creative story, which is a testament to the power of the idea,” said Sean Hanrahan, senior vice president, Marketing Solutions, ESPN.

For the first time in the history of the initiative, Nissan and ESPN are introducing the Nissan Heisman House Tour, a simulated Heisman House that will travel to different college campuses throughout the country, leading up to the 2013 Rose Bowl Game presented by VIZIO. Fans will have the opportunity to relax in the Heisman House living room, take photos with the trophy and meet some of the Heisman trophy winners and ESPN talent.