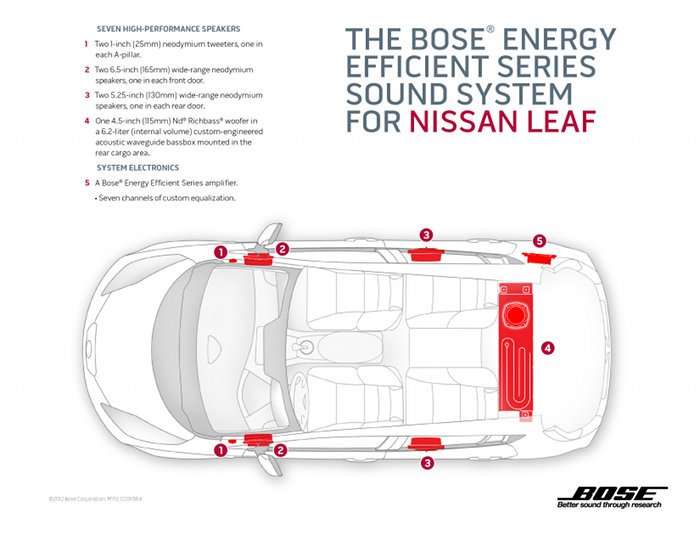 The all-electric Nissan LEAF may be known for being quiet on the outside, but now it’s boomin’ on the inside with the first custom-designed Bose Energy Efficient Series sound system available on the 2013 model that goes on sale this month.

The Bose system in the LEAF delivers powerful, high-quality audio, but with a significantly smaller and lighter footprint than conventional systems and at about half the electrical current. “Early adopters of electric vehicles were thrilled to have a zero-emissions vehicle and now that we’re expanding the market and it matures, many customers are asking for more amenities in their EV,” said Brendan Jones, Nissan director of EV marketing. “We wanted to be able to give them a premium sound system and be conscientious about the amount of energy required to do so.”

Nissan, which now assembles the LEAF, its battery and its electric motor all in Tennessee, introduced an expanded range of trim levels for the 2013 LEAF.

The Bose system is available as part of the premium package on SV and SL models.

To meet the energy efficient design goals for the LEAF, Nissan engineers focused on using every available watt of power effectively throughout the vehicle, including the sound system. Bose expertise in power-efficient technology led to the development of smaller and lighter speakers and amplifiers that perform at a high level without compromising the LEAF’s power, weight or interior space.

And at the heart of the sound system, a Bose energy-efficient amplifier operates on much less power and runs cooler than conventional offerings. The amplifier is also smaller and lighter because it doesn’t require as many large metal cooling fins to dissipate heat.

U.S. pricing for the new 2013 Nissan LEAF will start at an MSRP of $28,800 for the newly-added S grade, making it the lowest priced five-passenger electric vehicle sold in the United States. Depending on location, some consumers may purchase the vehicle for as low as $18,800 with qualifying federal and state tax credits, putting the LEAF on par with gas-powered vehicles of its size. Nissan will also continue its lease offer for the 2013 LEAF, allowing consumers to lease the electric vehicle for as low as $199 per month for 36 months, which includes tax credits and destination charges.

Additions to the 2013 LEAF include: 17-inch alloy wheels and leather appointed interior on SL models, available Around View® Monitor and 7-speaker Bose® energy efficient audio system and a 6.6 kW onboard charger that significantly reduces 220V charging times and is standard on SV and SL models.