On Tour with Volvo’s XC Series 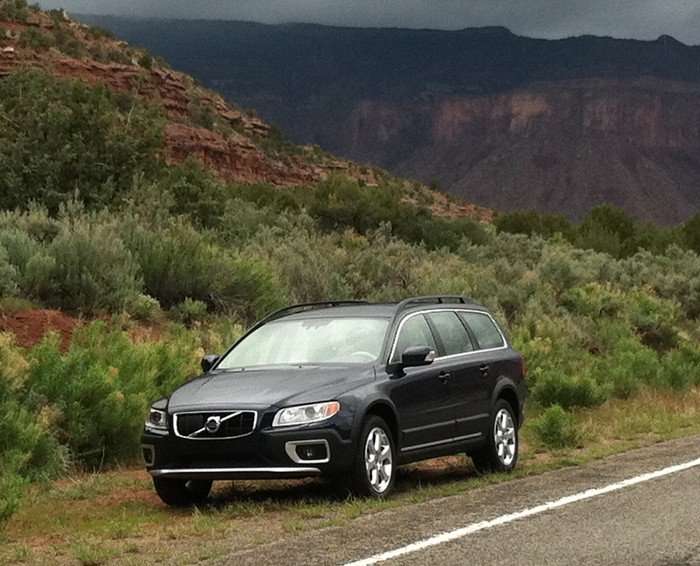 Volvo’s had a long journey since parting ways with Ford, but its travels haven’t changed the basic concept behind this iconic brand. Safety is always first, but fun is moving up their playlist.

To show us that, Volvo took a group of us cross-country in their Cross Country –read XC – models, the XC60, 70 and 90. With two in each car, we headed for Gateway, Colo., an hour southwest of Grand Junction. My driving partner and I were assigned an XC60 T6 R-Design, a new, more aggressive version of Volvo’s latest crossover.

This wasn’t a casual jaunt, as we left Los Angeles airport at 10 one morning and needed to be to Gateway, more than 900 miles away, by late afternoon the following day. We faced Los Angeles city traffic, Las Vegas’ jammed city streets and the small-town sheriffs and police of four states. (It’s interesting what kinds of creative revenue sharing a recession causes.)

But we also experienced majestic country—stunning mountains and rock formations, seemingly dead deserts, including a large sign pointing out that there were no services – gas or food – for 108 miles. The sign didn’t lie. Although I’ve lived in the West several times, I forgot how slowly the scenery moves past your car.

Luckily, on these federal highways, across mostly federal land, nobody was giving out moving violations. So we made the trek on time and settled into Western Colorado, ready to spend some time in the XC60, XC70 and XC90.

We spent the next two days off-roading and putting all three cars through their paces. We got the station wagon and big ute dirty, put miles on it and checked out its features and it foibles. I was happy that Volvo’s list begins with safety. The days were wet, the roads slippery and everything was cold. That means safety and comfort came well ahead of fun.

In driving the three vehicles, it became quickly clear to me that the station wagon

(XC70), large sport ute (XC90) and mid-sized crossover (XC60) have much in common in spite of the great differences in their size and purposes. There’s a common thread between these three very different vehicles.

Their common heritage is evolutionary. True off-road capability, on road comfort and clearly identifiable design flow through all three. Yet each has its strengths and weaknesses, but they’re clearly related and clearly share well-thought out, with specifically Scandinavian DNA.

Because these three approach the luxury category of crossover and car, they were pleasant inside. The senior citizen of the bunch is the XC90. Now 10 years old, this old-time sport-ute is still a very capable and competent throwback. I don’t say that unkindly, because big sport utes are no longer trendy and must compete on their capabilities.

The XC90 is large. The one we drove was the 3.2 R-Design. New this year, it was shod in 19-inch wheels and has a special grille and steering wheel as well as special leather seats. The suspension is tuned for more precision, but doesn’t result in harshness.

The powerplant is Volvo’s 3.2-liter in-line six-cylinder engine, which features variable valve timing and camshaft profile switching to match efficiency to how the engine is being used. This naturally aspirated engine now delivers 240 hp and 236 lb-ft of torque.

The V8 model goes away this year, but the six provides enough power for this ute. The interior is nicely done and matches others in the premium large ute segment. Being 10 years old, there’s an emphasis on being a truck, which is old-fashioned compared to the crossovers that make up much of this class now.

But the XC90 does what these vehicles are best at doing–taking lots of people and lots of their stuff pretty much anywhere you want to go. It’s tough but not brutal. It’s comfortable without being soft. It has much more off-road capability than any but a few owners will use.

The XC70 is a station wagon, albeit an all-wheel drive one. For 2011, you can get a front-wheel drive model, introduced this year to replace the V70, which ended production last year. Although the XC70 did a good job handling the muddy dirt roads up and down some difficult terrain, it shows its stuff on the highway.

In spite of its all-wheel drive and XC moniker, the XC70 is a car. In its front-wheel drive iteration, it’s powered by the same engine as the XC90, the 3.2-liter naturally aspirated six-cylinder. If you opt for the flagship XC70 T6 AWD, the power jumps noticeably, thanks to the 3.0-liter turbocharged six-cylinder engine. This year it produces 300 hp and 325 lb-ft of torque, an increase of 19 hp and 30 lb-ft of torque.

All XC70s are fitted with a six-speed automatic transmission with manual shift. The car is surprisingly fast for a nicely spacious station wagon with all-wheel drive. When you step on it, there’s a delightful turbo noise from under the hood as it jumps forward.

The interior is nice, the seats comfortable, but it would be dishonest not to chide Volvo for the add-on navigation system. It pops out of the top of the dashboard and remains at a weird angle. The controls are buried on the steering wheel where the driver can’t see them and shouldn’t look while the car’s moving. Perhaps they did it so we reviewers would focus our complaints on the system. If they did, they were universally successful.

Other than that, this is a good vehicle that proves why station wagons are smart. It has plenty of space for cargo; in fact, I think the only loss of space between a wagon and most utes is the air in the couple of inches of extra space under the roof. If you suspect I’m a fan of station wagons, you’re right, and I really don’t understand why so few buyers consider them. They perform their tasks well and efficiently.

The final model of the trio is the newest, the XC60.

The XC60 T6 R-Design we drove handled all the tasks it was given with dispatch. Driving down the Las Vegas strip, we fit right into the sophisticated excitement. Pulling in front of one of the more upscale hotels didn’t leave us nervous that we’d be booted out, or the guests would laugh at our presumption. As a matter of fact, the Volvo looked pretty good there.

The XC60 is as sophisticated and aesthetically pleasing as any crossover out there, with its sleek lines and well-defined, classy style. Its job is to attract new and younger people to the Volvo brand. If you qualify, you’ll find this crossover worth looking at. Most Volvo aficionados are already fans of it.

I drove the T6 R-Design, but there are two R-design models. Both get the suspension tightening that goes with this name— a stiffer chassis, featuring stronger damping and a more direct steering gear. Both get the cosmetic upgrades that come with being the flagship model. Both have plenty of luxury features. Both have Volvo’s various safety initiatives well represented, including stability and traction control.

Both are worth having, as the difference between the XC60 3.2 R-Design and the XC60 T6 R-Design is the powerplant, as either can be upgraded to all-wheel drive. Instead of the 3.2 R-Design’s 240-hp, six-cylinder engine, the T6 has a 3.0-liter turbocharged six-cylinder engine producing 300 hp and 325 lb-ft of torque. Front-wheel drive is standard on both models, as is the six-speed automatic transmission.

The XC60’s driving characteristics are equally as classy. Although you sit somewhat higher, this is a vehicle with a car’s comfort and safety. It’s quiet. It’s quick. It ate up the sweepers through the fun bits in the mountains and cruised comfortably on the interstate at speeds that will not be named.

What I found most interesting in driving the XC60 was that I could feel the presence of both the other two models. One’s a car, the XC70, which leans towards comfort rather than cargo in its capabilities. It’s easy to drive, easy to park, easy to live with.

The XC90 requires a bit more commitment, thanks to its increased capacity. You’re still comfortable, but you’re comfortable in a large vehicle. When the XC90 came to be, being a truck was a compliment. While the trends have changed, it still does that job very well and should appeal to those who have their own trends. Same with the XC70, as its owners probably dance to their own drummer as well.

But in the XC60, these perspectives and capabilities are melded seamlessly into a crossover that’s precisely in the sweet spot of today’s marketplace: an attractive, tall car with cargo-ish capability.