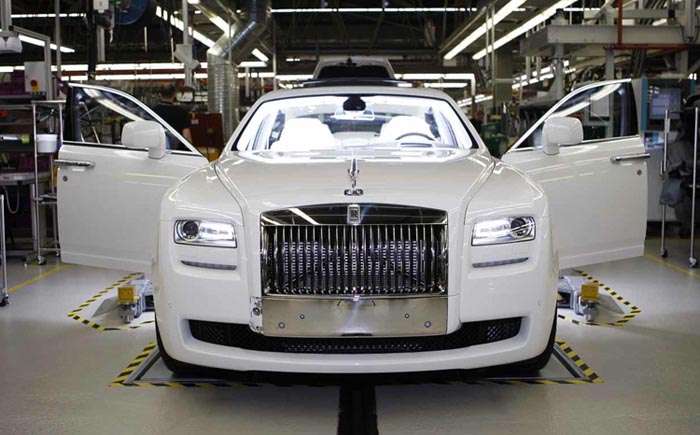 Every quest has a beginning. For the owner of a Rolls-Royce it begins in Goodwood, England in the southern region of the country. Here is where the new environmental-friendly factory and corporate headquarters combo for the British automaker were built just five years ago. Here is where dreams come true for individuals blessed with inconceivable privilege and celebrity. To fulfill my temporary appetite for the finer things in life, I decided to spend two days in storied Goodwood while playing the role of the young Crown Prince from Qatar whose fervor and sensibility yearned for truly original ideas and outcomes.

My serendipitous moment came during a conversation at Pebble Beach with Richard Carter, Director of Global Communications, and Thomas “TJ” Jefferson, Head of Marketing Services, for Rolls-Royce Motor Cars Limited. Carter, a tall, stern South African with an open mind has communicated more than once regarding my visit since I missed both the highly celebrated Festival of Speed and The Revival which take place summer and fall respectively in Goodwood. So I hopped on a United Airlines direct flight from Washington Dulles to Paris for a few days. After three memorable days in The City of Light, I caught an afternoon Eurostar from Paris Gare du Nord to St. Pancras International in center of London. The quick two-hour train ride was easy and comfortable. I stayed in the Bloomsbury area of town enjoying good Indian food and shopping on Southampton Row. It was rainy and dull in London that weekend so I studied the Rolls-Royce product lineup in my quaint hotel. Fortunately for me, I have been privy to driving every vehicle the company builds thanks to my good friends from the US Rolls-Royce team.

On Sunday, I woke up early for an early morning stroll and breakfast awaiting my pickup to Goodwood. Colin Ledwith was right on time and collected me in a Black Phantom Long Wheelbase. The Royal treatment was unimaginable. Colin, with his immaculately posh English, suggested I take my shoes off and rub my feet on the “lambs wool” carpet. And after a few indelible moments glazing at the landscape to the countryside I was sound asleep like a cub under the warmth of its mother’s fur.

Less than two hours later we arrived at the 200-year-old Royal Oak Inn in charming West Sussex village close to Goodwood Park and the remarkable cathedral town of Chichester. The Inn comprises a pub and restaurant, which is a popular “local” for many, and six cozy guestrooms replete with Wi-Fi, a refrigerator, full bath and a DVD player with a selection of classics. I paid attention to none of that and looked out of my window at the plain fields that stretched for miles. If there was ever a time to be at peace with yourself, this would be it. TJ scooped me moments later for a quick beer at The Kennels, a members only golf clubhouse on the grounds of the Goodwood House where the historical Festival of Speed is held. We even caught some NFL action on the big screen. Then we scurried back to the Royal Oak for dinner with Nigel Wonnacott, Product PR Manager, and good friend and fellow British writer and broadcaster Victoria Macmillan Bell.

The next morning Collin was back with another Phantom to escort me to the Rolls-Royce factory located on the south end of the Goodwood Estate for my tour and a proper British lunch. This is a factory I thought, clambering out the Phantom. The glass-encased building resembles more of a corporate office than a manufacturing plant. Emily Dungey, Product PR Officer, greeted me with enthusiasm. She was also the mastermind behind my overly convenient and precise travel arrangements. Before the tour I ran into North American President and pal Paul Ferraiolo, who was “across the pond” for meetings. He, too, was elated that I finally got a chance to experience “bespoke” craftsmanship from Rolls-Royce. Emily then introduced me to Corporate Communications Officer, Marco Jahn who would be my very knowledgeable tour guide for the next two hours. A short sojourn into the welcome room for tea would give me an overview of “who’s who” and “what’s what” at the plant. Sales for Roll-Royce are up three-fold and demand is hard to meet these days. The company can thank the Ghost, dubbed after the 1906 Silver Ghost, for the achievement. That should make all 850 employees that more proud to be a part of the BMW Group owned British brand. As architect Sir Nicholas Grimshaw put it, “creating a spiritual home for Rolls-Royce Motor Cars for the 21st Century meant more than just designing a building to house the headquarters and manufacturing plant. The challenge was to make it a symbol of Rolls-Royce’s innovative approach – unique, forward-thinking and a world apart.

We walked down the line as Marco identified every simultaneous operation within the enviable Rolls-Royce climate. Each Ghost goes through 16 stations with a build time of an hour each, while the Phantom is fitted in 11 stations at 2 hours each. Just 15 cars a day are hand-built with the craftsmanship of experienced artisans who are trained for a specific bespoke task. So essentially, every vehicle in the plant has been sold with delegated directives from the buy, whether it’s a Fanta Orange Phantom Coupe or an Arctic White exterior/interior Ghost or a Yellow Drophead Coupe. For example, two Phantoms were designed for the Arabian Gulf with a reflection on the area’s pride and joy — the falcon — which represents power, swiftness and agility. The Coupe consisted of an Orchid Pear White exterior, a dual Tudor Red coach line, Seashell leather interior and falcon embroidered headrests.

We continued on to witness the marriage between a body shell and the powertrain. It was like surgery, watching each component match up piece by piece and by hand! Everywhere I turned there were ultra-premium materials all designated to a particular vehicle. Marco showed me the paint and wood shop and described how a Walnut burr log is purchased from an orchard plantation and ultimately carved into veneers. He described the freedom for endless hues and decorative veneers defines why Phantoms are the most luxuriant, moving depiction of grandiose artistry at its finest. There was so much to see in so little time.

I had lunch with Richard, TJ, Marco, Nigel and Emily before heading out. They were all intrinsically curious of my satisfaction and experience. Indeed I was! I made sure to bring back a souvenir, a Roll-Royce leather cardholder. There were many emotional repercussions to my departure as Collin dropped me off at London Heathrow for my United flight back to Washington, D.C. I momentarily looked back at the beauty and grandeur of the Phantom as Collin pulled away in slow motion. At least I would be upgraded in Business Class to enjoy equivalent amenities. It was now time for a movie, wine and a nap to restore me back to normalcy.